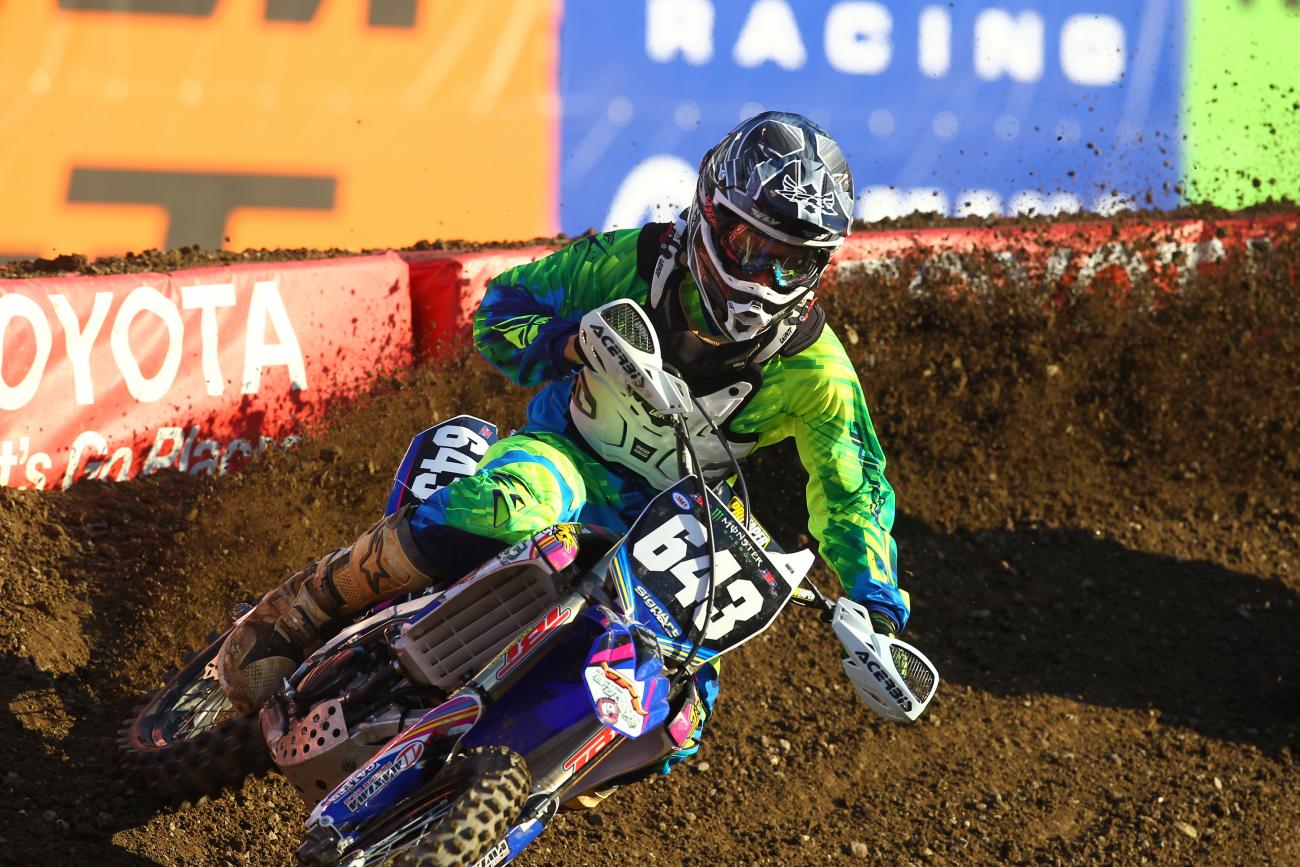 A couple years ago, while digging through some photos, I found a rider that had Miley Cyrus graphics on his shrouds. This was long before “Miley,” back when it was more Hannah Montana. I thought it was hilarious, but never thought much about it after. Earlier this week, I was digging through photos from Anaheim 1 and saw the same shrouds. This time, it was way more Miley than Hannah. The graphics belonged to 26-year-old California native Jake Oswald. Jake turned professional in 2007, and has made one main event in supercross (Toronto in 2010), but he continues to travel the country, doing what he loves.

We had to know more about Oswald and those Miley graphics, so we got in touch with him earlier today to learn more about his career, why Miley, and even play some Miley trivia.

Racer X: Hey, Jake. How’s everything going? Tell us a little bit about yourself and your journey to professional supercross.
Jake Oswald: I’m 26 years old. I got my first dirt bike when I was 12 years old on Christmas. At that time, no one in my family rode dirt bikes. I was kind of the first one to get a dirt bike. I went to a local race soon after at Barona Oaks near San Diego and kind of went from there. I did the weekend warrior thing for a while. In 2007, I finally turned pro. I raced a couple outdoors nationals but didn’t make the fast forty. Just been doing it ever since.

You’ve been doing this for quite a while. What keeps you going? What keeps you motivated?
I guess just the challenge. You can never be too good in the sport, because if you’re not winning, you have a lot of work ahead of you. It’s just fun and a great way to spend time with the family and see the country when you’re younger—going to all the amateur nationals and stuff. I’ve met a lot of friends doing motocross, and I don’t see myself stopping anytime soon. I enjoy every second of it. It’s better than any other team sport or any other activity I’ve done so far.

How did Anaheim 1 go for you?
Well, at the start of the LCQ, the rider right in front of me decided to check up at the last possible second going into the turn, and I was already committed. I went down and broke my right collarbone. It was bad enough where I needed surgery. I have one plate and ten screws in my right collarbone now. I went down to see Dr. Paul Murphy. He’s been helping me with all my injuries during my career. He said I would be out a minimum of eight weeks. So, I’m hoping to make the Houston round.

Do you have a job on the side, or is this a full-time gig?
Right now, this is the only thing I do. I wouldn’t call it a job—it’s more of a hobby I get to do full-time. My dad is retired, which helps a lot because he’s my mechanic, and I don’t have to stress about having to pay someone to work on my bikes.

You’re a native of California. Is it you and your dad packing up and driving to most rounds?
I’m about twenty miles east of San Diego, out in Alpine, California. This year, we are just doing 250 West rounds, so we’ll just drive the truck to all the west races. Previous years, when I raced in the 450 class, we used a Team Gus to haul our bikes to the East Coast rounds, which helped out a bunch. As far as practice, I’ve been out in Georgia, at GPF (Georgia Practice Facility), since early October. I came back to California around Christmas Eve. I do most of my pre-season training in Georgia. I think the tracks are better than what’s offered in California, and since I live so far away from the closest supercross track [in California], in the long run it evens itself out cost-wise.

We’ve seen a lot of riders from out west move east. Was there something specific that led you to head east?
When I first started riding 450 supercross in 2010, I didn’t really know of any places to ride in Georgia. We were heading out for Atlanta Supercross and looking for places to ride, and I rode MTF a few times and GPF. We really liked the GPF facility and the people there were really friendly. The facility itself is amazing. It’s prepped and watered everyday, and there is only a handful of riders there that ride supercross everyday, so the track doesn’t get beat down quite as quick. The most people we have out there at once are five or six. It’s more trainer-friendly to go out there and ride because you can work on sections and get parts of the track down, which you can’t really do in California because it’s so crowded. Also, there’s no shortage of fast guys to practice with. I guess the misconception is that guys on the East Coast are not as fast. But, I think they are faster. So, it’s really nice to have guys to practice with.

For the past couple years, you’ve rocked Miley Cyrus graphics. Fill us in on the story behind that?
Oh, that’s my dream girl [laughs]. There’s nothing better than having a nice pretty girl on the shroud. My friend who does my graphics, Natalie Schons, back in 2010 or so, she said she could do anything I wanted for the Mammoth race. I was watching Hannah Montana on TV with my niece, and we were joking around about it and she said she could put it on my shroud for me. I liked the look of it, and over the years it’s caught some people’s eyes. The first time I ran them at a professional event was 2011, and Davey Coombs saw them and sent me text on it. I was pretty pumped. I decided to run them at supercross the following year, and I don’t have plans on changing them anytime soon.

Do you think you know enough about Miley that we can do some trivia?
Um, I’ll give it my best shot. Some people know a lot more about her than me, that’s for sure [laughs].

Oswald: I have no idea, but I’ll go with Peace and Love.

Oswald: I guess a unicorn.

Oswald: Next question. I don’t even know that one.

Three of six isn’t bad. That’s more than I got. Thanks for having some fun with us. Good luck this year. Who would you like to thank for helping you out?
I want to thank my mom, dad, Natalie Schons at SignArtMX.com for my awesome graphics, Mike at Thousand Oaks Powersports, Ronnie at Maxima Oil, Josh Woods at Georgia Practice Facility, TBT Racing, Ryno Power, Sunstar, Fly, Excel Rims, Works Connection, Acerbis, Pro Filter, Galfer USA, Hinson, FMF, Moto Hose, North of the Border Bicycles, and Dr. Paul Murphy [Murphy Sports Medicine Center] for fixing me up.