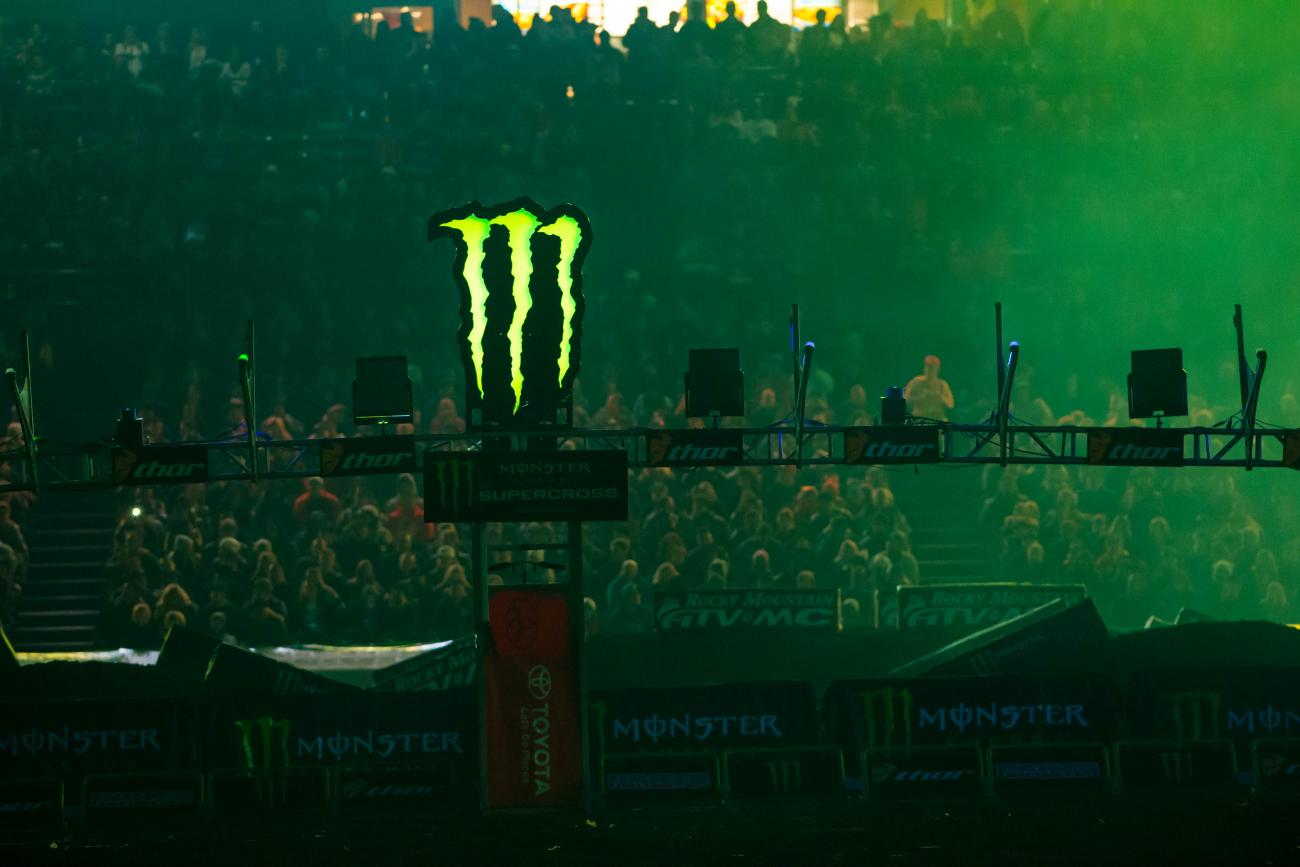 Hello, everyone, and welcome the Rev Up. Round two of the 2015 Monster Energy AMA Supercross, an FIM World Championship, heads east a couple hundred miles to Chase Field in Phoenix, Arizona. What did we actually see from the field last weekend? For race winners RCH/Soaring Eagle/Jimmy John’s Suzuki’s Ken Roczen and Lucas Oil/Troy Lee Designs KTM ace Jessy Nelson, they showed their true colors as title favorites. For others, like Monster Energy Kawasaki’s Davi Millsaps, GEICO Honda’s Eli Tomac, Yamalube/Star Racing Yamaha’s Cooper Webb, and GEICO Honda’s Malcolm Stewart, I think we are going to see a much different picture in Phoenix for round two. I don’t want to go so far as to call it a complete flip-flop race, but I think the top five in both classes will be different this time around.

The best part of the year is here. It’s only been a blink of the eye since the flags flew at the Anaheim opener, and in two more days we’re going to re-rack the gate and do it again. Let’s take a look at both classes and get revved up for the second big right hook of the new season.

Yes, it was just one race. However, the poise that Roczen showed in dominating the main event last week makes him my favorite to do it again. Bandwagon? Not really. I never said it out loud before Anaheim, but if I had to pick a guy that’s going to win 6-7 races this year it’s #94. Do I think he can come through the pack and pass a better starting Eli Tomac or Trey Canard? No. Do I think Eli or Trey can pass Kenny if they start right behind him? Yes. I believe the two Honda riders potentially have a better twenty laps in them than Roczen does. Although, I also believe that Kenny has a better eighty laps than both of them—I hope that makes sense. I expect them to keep rolling in the top three throughout the West Coast swing.

Like Davi Millsaps, Tomac dug himself a huge hole at the opener, and it was pretty much the worst-case scenario. Throw-away performances don’t really exist this year because guys like Roczen, Ryan Dungey, and Canard are going to have 10-12 podium finishes. The #18 and the #3 are going to need to click off podiums and wins in a big way to jump back into the title picture. They should begin in Phoenix, but before they do that, they have to go through Husqvarna’s Jason Anderson. I wrote pre-season that he would be the real deal, and I think he’ll back up in second place this season with another top-five this Saturday night. That’s how I see it at the very front. I think we’ll surely see Tomac on the podium and Millsaps in the top five for round two.

Yamalube/Star Racing Yamaha’s Cooper Webb should fire back in a big way in Phoenix. He was arguably the fastest 250 rider on the track last weekend, and he is my pick for the win this time around. With guys like  Malcolm Stewart, Monster Energy/Pro Circuit Kawasaki’s Tyler Bowers, and the aforementioned race winner Nelson, this is far from a guarantee though. Webb didn’t gate very well last time out, and described the pack as “frantic,” which I support. Almost half the field went down at one time or another in the main event. A huge nod of approval goes out to Cooper’s rookie teammate Aaron Plessinger, who looked very comfortable and calm on the racetrack. The Ohio native is the real deal, and could very well earn his first podium this weekend in Phoenix.

Kawasaki-mounted Josh Hansen looked impressive with his flash and speed in his return to racing. Look for him to race his way back into shape during the next two rounds. He showed enough potential to be considered a dark-horse podium fantasy pick.

Malcolm Stewart was flying last weekend and just had rotten luck. If he isn’t too banged up, it’ll be interesting to see what he can do if he keeps it on two wheels and gets a decent start. Also keep an eye on the Bowers/Zach Osborne situation. Looking at the Kawasaki track map, I see some serious potential for hard racing. As of the PulpMX Show Monday night, they continued to agree to disagree about the beef. Ladies and gentlemen, that’s why we run the races.

I want to talk about my first experience in the Race Day Live! booth. I was on the rev limiter a little bit when the live timing and scoring crashed (no fault of ours), and with that making up a great portion of our show, I was pulling tear-offs like a bad start at Southwick. It was an honor to work with the extremely hard-working crew, and we’re going to be tighter this weekend—especially the host (me). It’s awesome how the racers are really taking some swings at earning top qualifier. Some of those heat laps were the gnarliest of the entire day. There were a lot of people in the stands to watch the show in qualifying, and they didn’t miss out—even Chad Reed put the #22 on the top-five pylon a few times. Tune in to www.supercrosslive.com at 2:50 p.m. ET to watch the practice and qualifying action in Phoenix!

Round two is here, and we should see better racing with the jitters now shaken off. In addition, this track looks friendly to passing. Can Millsaps and Tomac fight back? Will Roczen win again? Can the eyebrow-raising Husqvarna-mounted rookie back up his podium? It’s live on Fox Sports 1 this Saturday night!