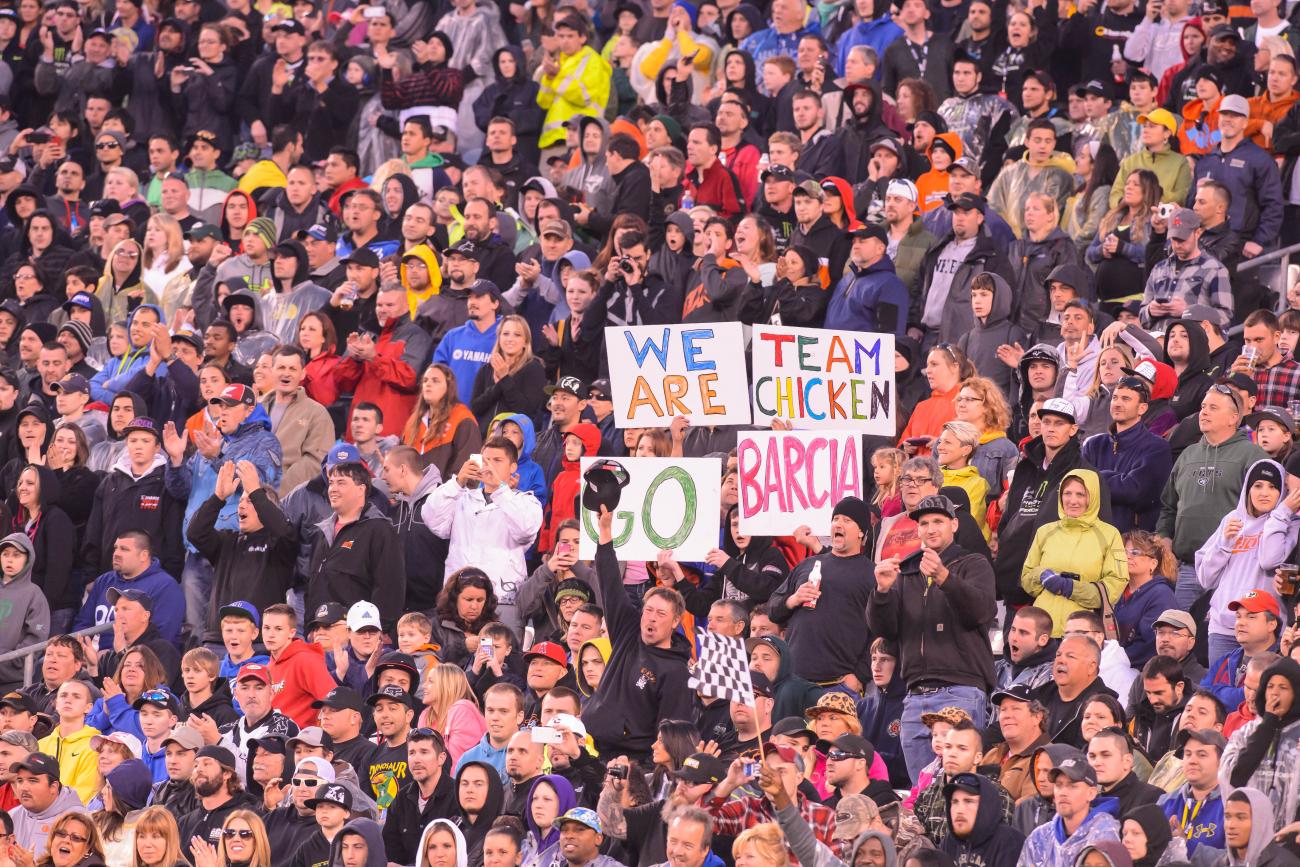 Hello, everyone, and welcome to the Rev Up. Like a shotgun blast, the 2015 Monster Energy AMA Supercross, an FIM World Championship, is here. It’s crazy to me how fast it snuck up on us. The off-season seems like it goes on forever, when all of us fans are covered with boredom. But just as seamlessly as we have slipped from 2014 into the new year, here she is. No more waiting—it’s time to return to the show.

I’m personally more excited than ever because of my new job opportunity as host of Race Day Live! over on www.supercrossonline.com. It was just one of those things I really wanted to do, and through other forms of hard work I was able to make it happen for myself. If you want something you have to go get it—nothing just lands at your feet. I wanted it badly and am humbled and proud to have captured it.

Like most of you, I am a lifelong fan, but for the past three or four years I have kind of fallen in love with the sport all over again. Both Monster Energy Supercross and Lucas Oil Pro Motocross have grown exponentially, and I feel like they are thriving. The supercross program in particular has captivated me in a way I can only describe as the way it used to be when I was a kid. The live television coverage, the scene in the pits, and the bikes themselves reignited my engine as a devoted fan. And, not to geek out too much on you here, but the bikes are just so sick this year. That new KTM, the all-green Kawasakis, the blue-hued Hondas, JGR Yamahas, and the always sano-flush RCH Suzukis are going to have everyone drooling during the opening laps of practice, when we’ll all see them together on the track for the first time. There’s even going to be a factory Husqvarna out there that could actually steal fastest qualifier—in both classes.

On to Anaheim 1. I believe this is the world’s biggest race all year. It doesn’t have the nostalgia of the Motocross of Nations, but the pure static energy of Anaheim 1 just knocks it over the top and makes it stronger than all. The initial walks through the pits and opening practice sessions build up to this weird and intense moment about an hour before the night show begins. The fans vacate the pits to find their seats in the stadium and the riders get up from their autograph tables to put their gear on. Mechanics begin firing up the bikes and the smell of 100 race bikes fills the cool California air. The riders surface from their haulers with their helmets on and their goggles around their arms, then throw a leg over for the first night show of the season. They all wear a facial expression that reads “time to take care of business.” When they all start making their way towards the tunnel you can barely keep your hands from clenching into a fist it gets you so jacked up. That’s the moment right there for me: when the boys all congregate to the tunnel and sit like gladiators preparing to fight the lions.

But, again, it just continues to build. It will either be a sell-out or nearly a sell out, and as everyone sits jammed inside Angel Stadium, they bench race about practice and all things supercross. Just then, there is that feeling of appreciation for being a fan there in person ready to experience Anaheim 1. This is a common feeling all fans get throughout the year. Every supercross we get to see is awesome, but for the opener it is so special. Then they turn the lights off in the stadium. Wow. A gigantic, collective scream of approval and appreciation emits from the fans, and everyone just screams in the dark for a few seconds before the green smoke, fireworks, and music begin to pound, every hair on your body standing up.

Both classes are thick, from top to bottom. Every year we all say how deep the fields are, and how it is going to be the best season ever. I don’t believe the cliché applies to 2015, because it is going to be nuts. Everything has grown. The depth and skill level of the riders, the power of the machines, and the collaboration of both are going to be a spectacle to behold. It’s hard not to be over the top, but like I said, it’s like being a kid again. The new year and new supercross season are upon us. The first holeshots and wild side-by-side trips over the triples are only a couple days away. It’s time to return to the greatest passion of our lives, which applies to you if you have read this far. It’s so close that we can all feel it, and more than likely these last two days are going to be the most agonizing.

I can’t wait to sit beside Jim Holley and call the first practice and qualifying times of twenty-fifteen. Please wish me luck; I’ll be taking all of you readers with me when I put on the headset for the first time. You guys are my strength, and I want to thank all of you who have followed Rev Up throughout the years. This will be the spot to get you jacked up for the race to come every Thursday in 2015. I hope all of you are as excited to see the racing begin as I am. It’s time to go racing, folks.