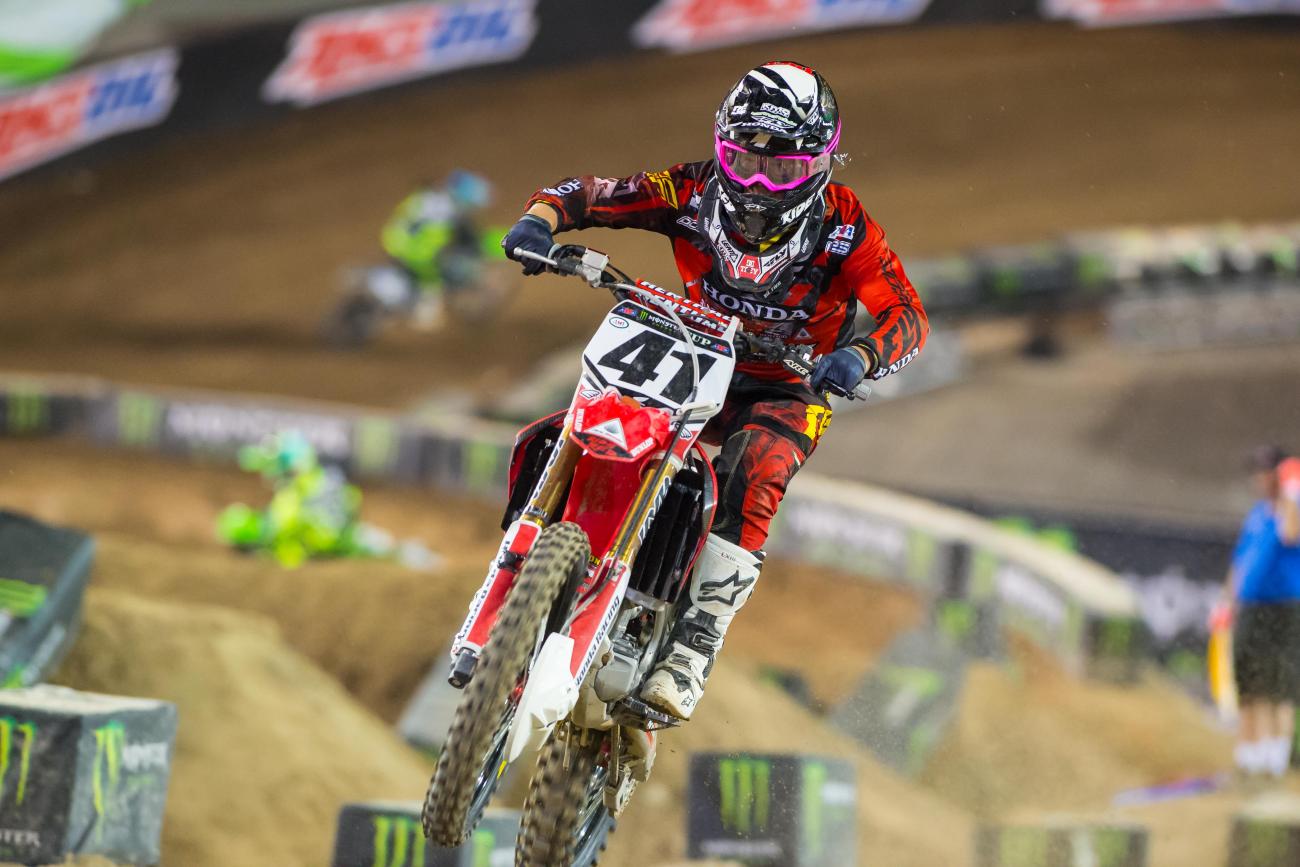 You’d think Racer X Online and a fantasy motocross/supercross league would go together like pre-mix and race fuel, but we weren’t going to launch one until we found the right formula. We wanted something different and something that really tested your knowledge of the sport, and we found it by partnering with Craig Lyons and his MotoDynasty league. You can go to motodynasty.racerxonline.com to learn the rules and sign up. The basic plan is, each week you try to predict where each rider will finish, and the more accurate your predictions, the better you do. It’s free to play, but there is a fee if you want to compete for prizes. Either way, it’s going to be a fun ride, and one we hope goes on for many seasons to come. To learn more, here’s an interview with Lyons, who started the whole thing.

Racer X: Okay, Craig, this is a new partnership with MotoDynasty on Racer X Online, but for you, this is not new, you’ve been developing the plan for a few years. This is something you’re very passionate about.
Craig Lyons: Yeah, I’ve been working on MotoDynasty from the first round of the 2012 season. I put some information on a white board and got a bunch of my friends together. We pooled some money, and it took off each week from there. It didn’t take took long to where I started looking at other fantasy games that were out there and realized that I had something else, something different, that I wanted to get out there to the public.

And that’s where we at Racer X saw eye-to-eye with what you were already seeing: we wanted a fantasy league that really shines light on all the riders, not just the winner, or the top three, or top five. That’s really the key to what you were trying to develop.
Yeah, it is. I was a race mechanic for privateers for a number of years, and I learned their racing matters just as much as they guys up front, if not more so. We need those guys on the gate week in and week out, and they need exposure. A lot of those fans in the stands might not put a face and a name with a bike, or follow those guys too closely. With MotoDynasty, we provide a chance for them to do that.

So let’s just explain how it works in a nutshell: It’s not the standard “Pick a certain amount of guys who you think will do well and that’s your team.” This actually encourages you to predict the entire main event final result in both classes as accurately as possible.
Yeah, you try to predict where each rider will finish, as accurately as you can. You can select the entire starting gate, 1-22, if you’d like, and each time you nail a rider’s finish perfectly, you’ll score big points. If you miss by a spot or two, you’ll lose a small amount of points. If you miss by a lot, you lose a lot of points. So, you can also reduce the risk by picking fewer riders—maybe you’re only 100 confident in where seven guys will finish at Anaheim 1, and you’re not sure about the rest. So you can select only seven riders, which is less risk but less chance of reward. What you’ll find, though, is that the biggest swing usually comes in that 12-20 range, with some privateers and guys who might not always make the main event. Over the years we’ve found that the more riders you pick, the better it usually works out, but you can select how much risk you want to take. Your accuracy with every rider on your race card is the key to finishing.

So, lets just make an example here: Trey Canard. If you predict he finishes second, and he does, you score big. If he wins or gets third, you lose a tiny bit of points. If he finishes way back, you lose a lot of points. It’s all about how close the rider finishes.
Exactly. Of course, it’s all about nailing it right on the money, and you usually see the most shuffling between those guys in 12-22 than in the top ten. We think this will bring guys like say a Ronnie Stewart to the forefront of fantasy play—you’ll suddenly find yourself watching his lap times in practice.

Yeah, because lets be honest—Ryan Dungey almost never has a bad race. Not much variation in his scores. But there are other guys who might not make the main, or have a huge night.
Yes, and remember there are guys that shine in certain stadiums or on certain tracks. A few years ago they went to Minneapolis and Dungey won it—if you played him to win and counted on that home crowd advantage, you would have scored a lot of points. That goes for all the riders; you have to know what types of tracks they might do well on.

And you don’t have to pick the full twenty-two rider field every week.
Right. Maybe you’re just playing in a league with friends and you want to set certain rules in a private series—just pick five guys, ten guys, whatever. So if that’s more fun to you, you can play it that way, too.

Was your original goal to develop this into a fantasy site?
Initially, it was to just have fun with my friends and family. We’re all huge fans, and after I saw the reaction from them, I wanted to bring this to life, and I started looking into ways to do that. I really want to thank all the guys at VurbMoto, who hosted MotoDynasty on their site last year. They believed in me and helped me get this started, so I’m really thankful that they did that.

Your background is pretty interesting.
Thanks. Right out of high school I started attending the Motorcycle Mechanic’s Institute in Arizona, and I became Ryan Clark’s practice bike mechanic. Then during the season his race mechanic got a job offer with Yamaha of Troy, so Ryan called me over to his house and asked if I wanted to go to RedBud with him, and it went from there. After two years with Ryan, I worked with some amateur riders in 2006 and 2007. Then I went to Star Racing Yamaha and wrenched for Broc Tickle. I then moved over for the launch of the MotoConcepts team with Mike Genova in 2009. I wanted to open more doors for myself, so I joined the National Guard as an Apache helicopter technician. I had ten solid months of training there where I had to step away from moto completely, but after I graduated from that, I came back home and continued college studying mechanical engineering. I ended up going back to MotoConcepts in 2012, and they were great working with me and my schedule with the National Guard, and the Guard was great with working with my racing schedule. It was stressful, but fun too. So, I’m no stranger to running some big projects and getting stuff done in a timely manner. What I’ve learned in this MotoDynasty project is that all the experience I gained in the past has helped me get this off the ground, and will help with where it’s going in the future.

And you’re still involved with the sport as a day job.
Yeah, I do marketing and amateur support for Scott Sports. I started working with them in the fall of 2012. MotoDynasty is something I do because I love it. I love my day job, love working with guys like John Knowles and Primo Moratto at Scott.

The cool tie-in is we have cool prizes from them already.
Yeah, Scott makes world championship bicycles, and the quality is up there with the best of them. So, Scott was cool enough to offer up a Genius 750 mountain bike for this season’s overall winner of the 450 class, and a ZR One road bike to the 250 class winner.

The season starts in just a few days. If people aren’t sure, they can join for free.
Yeah, that’s right. It’s completely free to play if you just want to get in and get acquainted with the game play. No risk on your part. The only thing you have to gain is a fun hobby and more knowledge of the sport.