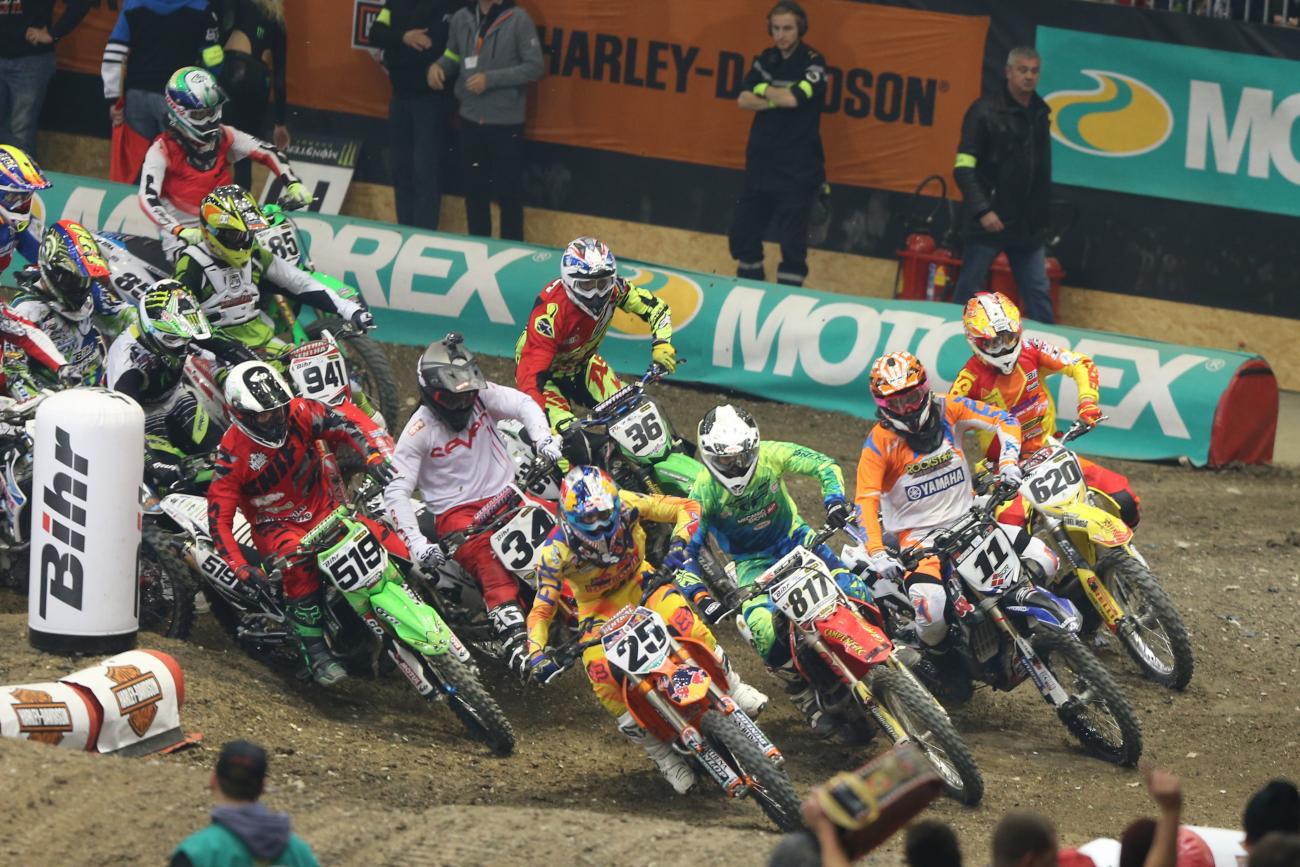 During the tedious months of the off-season, we all look for some kind of action to fill the void. For years, most of us have looked to Europe and the “big three” supercross events that take place in the winter as a source of entertainment. Bercy, Genova, and Geneva all have a certain mystique surrounding them, but what is it that makes them so special?

Prior to this weekend I had never ventured over to one of these races, so I was intrigued to see the spectacle that is a European supercross for myself. Of course the impressive line-up (consisting of Adam Cianciarulo, Malcolm Stewart, Josh Hill, Marvin Musquin, and more) of riders that graced Geneva only added to the excitement within the Palexpo, which was unsurprisingly full of passionate fans.

The venue immediately met the various stereotypes, as the track resembled more of an arenacross and didn’t really lend itself to great racing. Admittedly, there were a few sections that separated the guys; the whoops, for instance, were quite large and prompted mistakes at times. The first rhythm section also provided the riders with a handful of options; they could either triple in from the outside or double, double, double from the inside. However, it didn’t look like either line was clearly faster, so a lot of riders were changing how they tackled the section as the night wore on. They could stay low by sticking to the inside and make up the time they would lose by not jumping further.

It was that particular section that claimed a handful of riders (namely Adam Cianciarulo) and therefore proved to be a point of debate over the weekend. I can’t really point to one particular reason for this, and the riders that I spoke to didn’t say that it was dangerous either. The common consensus amongst most guys was that the soil was very tacky and grabbed you, particularly on the first night. Perhaps that caught some riders off guard.

In regard to Cianciarulo, he was so much faster than the rest of the SX2 field that I think it put him at risk through no fault of his own. The track wasn’t large enough to accommodate such varied speeds, so when he was slicing his way through the field (and he did that remarkably) it obviously wasn’t as safe as it would have been had he gotten out front. But, then again, only rarely would the race have ended up like that for him. It was just bad luck, but he knows all about that; he has unfortunately had his fair share over the last twelve months. [Ed note: Cianciarulo will miss the entire 2015 Monster Energy Supercross season.]

I feel like, for whatever reason, Marvin Musquin was overlooked somewhat in the days prior to the race, but he was seemingly a cut above the rest, and only a minor brake issue kept him from winning every race he contested. Musquin holeshot the two main events too (from the outside on Friday, despite the start straight being extremely short), so it really was a perfect outing for the Frenchman.

If I had to explain why he was so dominant, I would point to two reasons: Obviously his starts helped massively, especially considering that his main competitors (Hill and Stewart) were buried mid-pack both times. The way he exited the corners was perfect and seemingly faster than the others too, which was obviously beneficial on the tight track. This must bode well for his 250SX campaign. We all think that he will be a title contender, right?

The fact that Cedric Soubeyras ended second overall was certainly a mild surprise, but it is also a testament to his speed and ability. Admittedly, his start on the first night aided him, but his fifth-place finish on the second night was still impressive considering he came back from a mediocre start. If there was one point where Cedric impressed me the most, it was during his heat on the Saturday, where he kept Hill at bay for the duration. He withstood a lot of pressure and showed a lot of composure. He started taking some unorthodox lines at the end to ensure that there was nowhere for Josh to pass, which worked as intended, as the American tried everything but couldn’t make a pass. That should also give you an idea of how tight the track was, if you weren’t there.

Speaking of Hill, he may have been the second-fastest guy in the SX1 division, but he was constantly getting caught up in the freight train of guys in the main events and didn’t get much of a chance to showcase that speed. I look at each of these off-season races as auditions, as he is obviously trying to acquire a deal for 2015. From that point of view, I think Geneva went well for him. Sure, the results may not have been exactly what he had anticipated, but he still showed that same raw speed that took him to a podium finish at the penultimate Monster Energy AMA Supercross round last year.

He revealed in a post race-interview that he hasn’t actually ridden supercross since Bercy, which was a handful of weeks ago. Despite this, he was immediately right at the front on Friday in Geneva, which was quite impressive and will probably be overlooked by most.

Malcolm Stewart has tackled his fair share of off-season races in recent weeks, like Hill, but things just didn’t come together for him this past weekend. Whether it was because of bad starts, crashes, or mechanical issues, he never really got going. Mookie had just started testing with GEICO prior to travelling over to Switzerland, so I wonder if that had an impact on his performance? He was still strong at different points, though; he pulled through to third in the first main event and was right with Soubeyras. He also battled with Musquin in his heat on Saturday, until he washed out in a turn and gave up the win. He suffered from mechanical issues throughout the weekend, though. He was out of the final main due to one. He also had an issue in practice, which meant he only completed one lap during the day on Saturday. The final day didn’t go to plan at all, but having him there was still very beneficial for the promoters; there was unsurprisingly a lot of attention on Stewart wherever he went. Unfortunately I couldn’t quite push through the rowdy Swiss fans that were surrounding the Americans’ pits to speak to Stewart,

As per usual for races like this, Fabien Izoird was a factor in the battle for a spot on the podium all weekend. I think that a lot of people don’t recognize how fast he is, but he is consistently a threat no matter what bike he is on. The same goes for fellow Frenchmen Valentin Teillet and Gregory Aranda (who actually took second on the second night, which came out of nowhere); they are staples at these races and impress a majority of the time.

Did Geneva fulfil my expectations of a European supercross? It really did. The crowd were loud, the atmosphere was brilliant, and the racing was thoroughly entertaining. Unfortunately riders’ injuries impacted the mood on the first night, but the show (and a lot of it was a show; it seemed like racing took a backseat at times) went on and, at the end, the king reclaimed his crown.