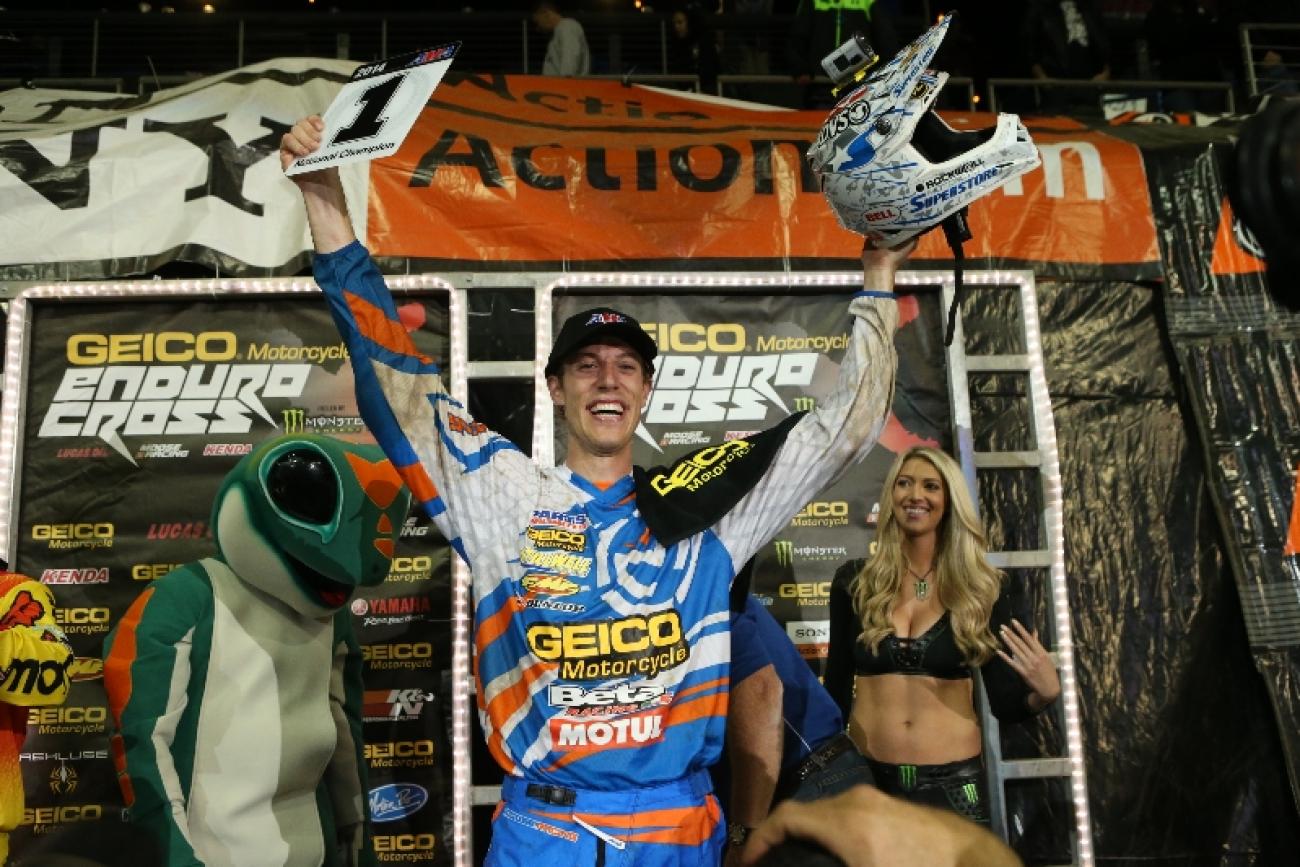 Where do you start with this Cody Webb story? You could start with him being the first to finally end the five-year EnduroCross domination run of Taddy Blazusiak. You could talk about his transition from trials riding. You could mention that he rode a factory Beta (!?) to this GEICO EnduroCross Championship.

Or you could start it far away from the races, at San Jose State University, where Webb is an engineering student. He carries a full class load, and it doesn’t take an engineering degree to realize that’s a load few can handle. The idea that he’s been pursuing this degree while simultaneously rounding himself into a world-beater on a motorcycle doesn’t seem to compute at all. There he is, traveling the world on weekends, attending class on Monday, training, and riding during the week, constantly improving in each discipline. Run that equation each week, multiplied by years, and you’ve got something truly special.

“Honestly, I still don’t know how it’s even possible!” he says. “I’ve gotten so much better at time management. Someone should hire me to teach time management! Whenever I have a free second, I’m on the road bike or working on bikes. Then it’s riding and training and studying and class every day. It’s not letting up too much, either, I’m going to do the European SuperEnduro races, too.”

Before we get too far into the racing bit, let’s give Blazusiak his due. He’s the Jeremy McGrath of EnduroCross, for certain, and one close title victory by Webb won’t change that. The Polish star launched EnduroCross, and EnduroCross launched him. After five years as champ, he still dominates the record books. This year he put up a determined fight, but you could see that Webb had progressed enough to be able to beat him, and, most importantly, believe he could beat him.

“I’m just amazed how my mind and motivation has gone to this level. It’s all about confidence to get this far,” he told us yesterday, after locking up the championship on Saturday night in Ontario, California (A proud Blazusiak, by the way, won the race).

Webb started as a trials rider. That’s why he rides a Beta, because they’re a big brand in the small world of trials. He won an AMA National Trials Championship, and like many of his peers from that sport, began to dabble in EnduroCross. Trials skills certainly help clear the rugged obstacles, but trials racing is about scaling the gnarliest terrain without crashing. Speed and fitness do not apply. One of the lesser-known sides of EnduroCross is the physical element, with riders usually pegging their heart rates to full-max when struggling over rocks and logs while also racing each other. Ever crashed your bike in a precarious spot on a trail ride? Yeah, you know the feeling of fighting to get the thing back going. Now do that in a sprint race.

Webb had to put in a lot of work to gain that kind of fitness and speed. So he started training and motocrossing. On the darned Beta. Quite a few young trials riders saw EnduroCross as their way forward, but he and Colton Haaker have crossed over best. These young guns had Taddy in their sights, but it’s not easy to take down a guy who has logged a perfect season before.

“When I first started EnduroCross and got on a dirt bike, I was good but not even close to where I am now,” says Webb. “I’d do all the obstacles fine, but I was slow. I was like a snail out there. Taddy comes from a trials background, too, but if you watch him he never lets off the gas. That’s what I needed to do.”

Webb finished second—a distant second—in the 2012 EnduroCross Series. He started 2013 injured but roared back late to collect his first career win. Moreover, with his ever-improving fitness and speed came more confidence. He entered the 2014 season as a genuine championship threat but ignored the pressure of a tight points race with Blazusiak and Haaker. A late surge pushed him ahead, and he needed to just finish in the top five to lock up the title on Saturday.

"In the main I started behind Taddy and Colton and didn't want to battle with them and possibly crash. I was patient and held back the whole race and with a few laps to go, Colton went down handing me second. It was an amazing accomplishment, and I can't thank everyone enough for their support this year. It's been an incredible four years with Beta USA."

There’s not too much celebrating to do, though, because while Webb has reached the top, he’s still in the middle of the grind. He’s still going to college, with hopes to maybe parlay an engineering degree with his experience as a racer into a research and development job within the industry. He also had to do a photo shoot on Sunday after the race. He has a schedule of European races coming up (SuperEnduro, which is the international form of EnduroCross). He’s transitioning teams, too. The mighty KTM off-road effort has come calling, and they’ll stash him on their RPM KTM satellite effort in 2016, with full factory support.

Off-road racing still isn’t the most lucrative way for an athlete to make a living, so Webb will stay in school in pursuit of the bigger picture. He’s already gotten a big prize, though.