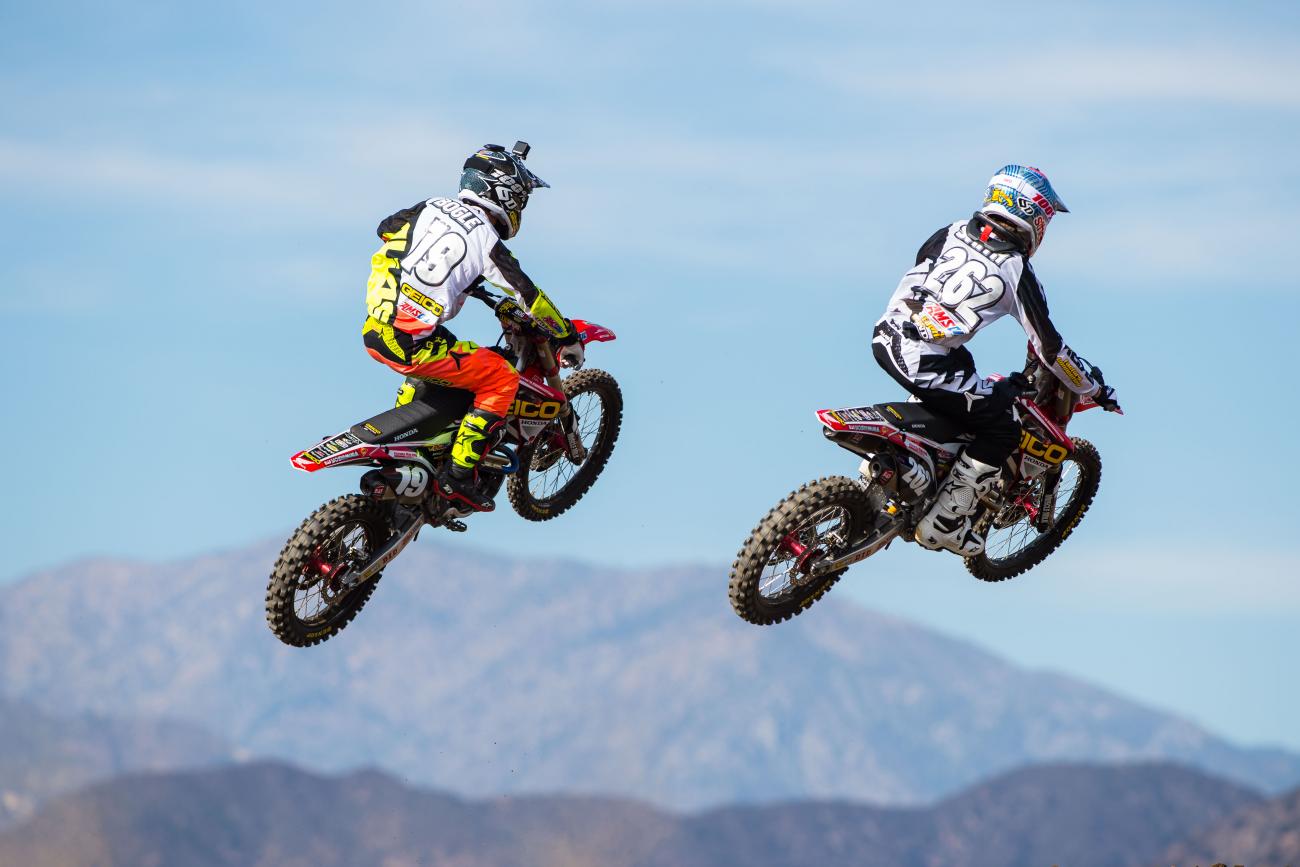 Suspension setup is normally a compromise between soft-for-turning and stiff-for-jumps-and-whoops, so Red Bull Straight Rhythm presented a chance to really twist the clickers and go crazy; however, most teams didn’t. We talked to a few notable suspension resources, like Jim “Bones” Bacon from Monster Energy/Pro Circuit Kawasaki, and most commented that they didn’t try anything too radical. “It’s tempting to make the front end high and the back end low since you don’t have to worry about turns, but the balance is off for the whoops,” said Bones. In addition, it’s safe to say most riders were using the event as a supercross shakedown and would rather stick with regular race setups and use the event as a testing ground for 2015.

And speaking of 2015, this race works well as an icebreaker for new riders and teams. Some senior KTM staffers mentioned how helpful it was to work with new recruits Dean Wilson and Justin Hill in a lower-pressure environment than A1. Sure, teams test for months with their new riders, but to actually operate out of the race semi and interact on bike changes with their parents and other entourage is helpful at a race that doesn’t count for points.

Wilson probably had the biggest changeover of all, since he was racing a Monster Energy/Pro Circuit Kawasaki 450 just six days earlier in Latvia for the Motocross of Nations. Racing on a KTM 450-SX is about as far as you can get from des Nations conditions! Wilson flew back to the U.S. on Monday, took Tuesday off, and then rode on Wednesday and Thursday to get ready for the event. He seemed to struggle early on Friday but got much better as the day went on, eventually qualifying second overall and finishing fourth on Saturday.

While we’re still months away from Anaheim, and this track didn’t even have turns, it can still serve as a confidence booster if things go right. And they did for Lucas Oil/Troy Lee Designs KTM rider Jessy Nelson, who came out on top in a matchup with one of the 250 favorites, Justin Bogle, to finish third in the 250 Class. Nelson looked more aggressive than ever on the obstacles. While his sophomore supercross season last year was spoiled by a big crash and injuries leading to Anaheim, Nelson could be a contender for wins next year if he stays healthy through the off-season.

Izzi back? Yes he is! Nico Izzi had already been through hell and back in his career, but his 2013 season, featuring two torn ACLs, sent him into the deepest depths. Just a few months ago, we heard stories of Izzi hitting absolute rock bottom in life, and it seemed doubtful he’d ever race again. A few people came to his aid, though, and helped him clean things up and begin to live a normal life again. Then came some riding—with the folks at Rockwell and Yamaha helping get him a YZ250F. Although Izzi had only ridden five times before Straight Rhythm and his bike was close to stock, he looked pretty good, qualifying seventh out of sixteen riders and knocking out Tevin Tapia in the first round. He expects to be racing Anaheim 1 in the 250SX Class.

Underrated ride of the weekend? Kyle Partridge. He turned in some of the fastest runs of the first round while besting Kyle Chisholm, and gave Justin Brayton, who eventually finished second overall, a good battle in the second round. Partridge is a big, tall rider, and height is usually good for whoops and jumps but hard to deal with in corners. This could be a great event for riders like Partridge.

Props also to GEICO Honda’s Jordon Smith, who is still technically an amateur unless you count this event as his pro debut (and it’s hard to say if this counts, since other amateurs like Ryan Surratt and Keith Tucker also competed). Smith will even have to race a few nights of Amsoil Arenacross to be eligible to race the 250SX East Region in supercross in 2015. You wouldn’t know any of that watching him ride, as he gave his well-established teammate Justin Bogle fits all weekend. On Friday, they were matched up for their four practice runs and went wheel-to-wheel each time. On Saturday, they met in the quarterfinals and again dueled down to the line. Bogle just edged him, but Smith, who hasn’t started testing for supercross, showed he’s got some real speed.

Chris Blose, normally in the 450 Class, raced a 250 for the weekend sporting the familiar Monster Energy Babbit’s Amsoil logos from Arenacross. Blose is expected to fill the spot left on the team by Tyler Bowers, who is moving to Monster Energy Supercross. The Arenacross series uses only 250s.

Malcolm Stewart doesn’t have a deal for 2015, so he showed up on a mint-green and black bike adorned with Seven logos. Seven, of course, is his brother James’s gear brand. Underneath the black plastic, Malcolm’s bike is a Honda CRF450R, which is what he was used to after spending the last two summers on a Honda 450 with the TLD team. This wasn’t a TLD bike, though, as Malcolm’s dad James Sr. tells us they bought the bike and it’s just a modified stocker.