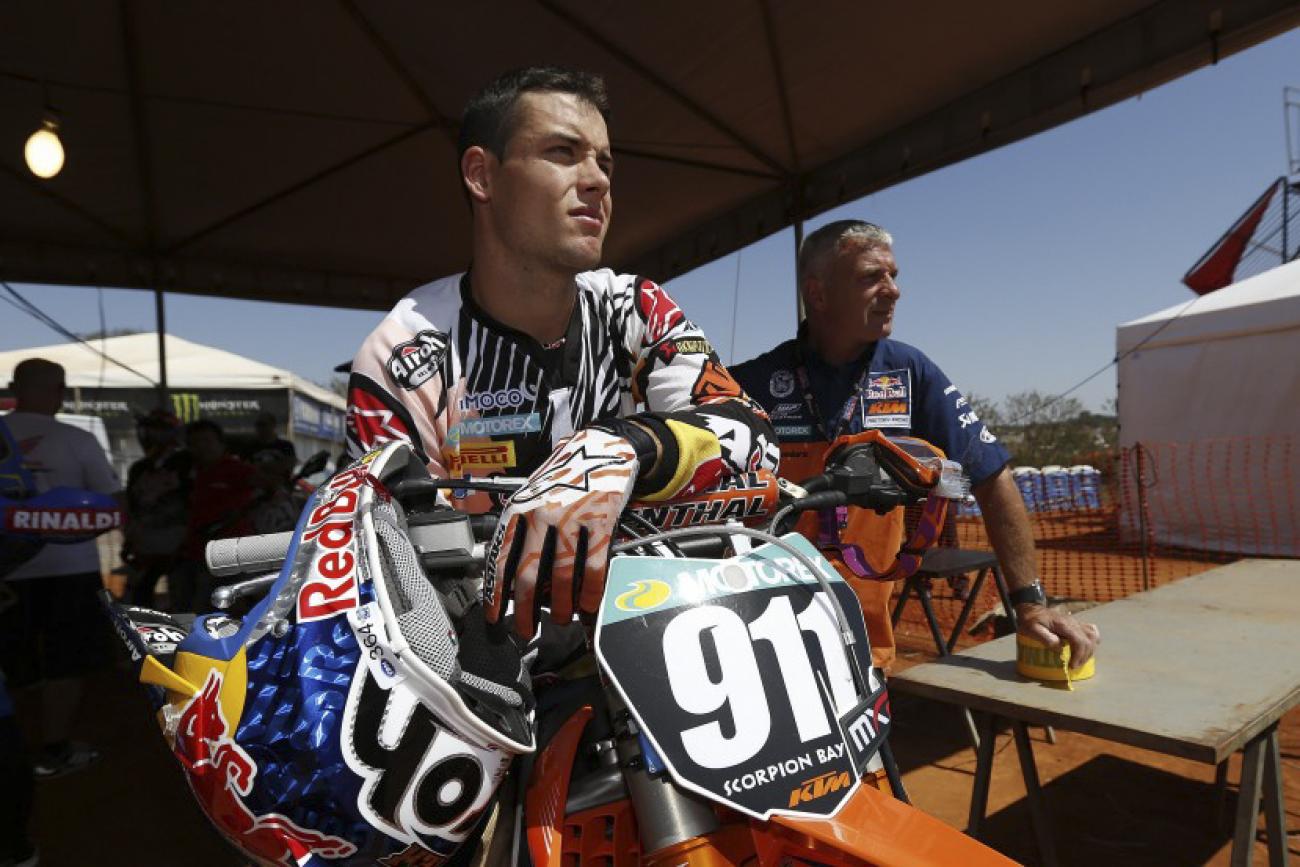 This week one rider in the Red Bull KTM team will be sweating. Another will also be trying to keep his cool. Jeffrey Herlings will want time to slow as much as possible as every hour until Friday will help his recovery from a broken femur and a stomach infection. It is an authentic race of a different kind for the Dutchman, who won every GP he entered in 2014 (thirteen) and held the red plate as series leader for a majority of the season. The 19-year-old has seen a 100-plus points lead trimmed to just 23 (less than a moto) in defense of a third title, and the only athlete capable of deposing ‘84’ is Jordi Tixier.

The Frenchman was left off the 2014 Motocross of Nations team and hasn’t had his KTM works contract renewed after another indifferent start to the campaign, but he has found recent success. Since Herlings’ disappearance, he has won his first Grand Prix and is now looking strong to be the Austrian brands fifth MX2 World Champion since 2008. Mexico will be all about Tixier (and what he can do) and Herlings (and whether he can show up to ride some laps and gain points to make his friend’s job harder). The worst-case scenario for Herlings would have been a 1-1 by Tixier in Trindade, Goias, Brazil over the weekend, but the 22-year-old was cautious and collected a 5-4. The championship has yet to be finalized. It is an unexpected climax to the season and the category that Herlings has held by the throat for two years.

Racer X: Jordi, it's a bit of a strange situation for you to be playing second fiddle to Jeffrey and now you are centre stage ready to steal his spotlight.
Jordi Tixier: It is quite difficult for me at the moment, and I am trying hard not to think about the championship; otherwise I won’t ride well. A lot of people send me messages and texts to say “You can be world champion,” and I know I can do it; I just have to be in the top five, and I’ve been on the podium at the last few GPs. If I can continue like this, then this year will be mine. Jeffrey could come back for Mexico and many things can happen.

You made some mistakes at the beginning of the season. Is it tough to look back now and see the points that were wasted?
That’s true… but it is in the past. At the beginning of the championship I was really bad and not riding like I wanted. I lost so many points. Anyway, we are in the present now and I have to do my best.

You were criticized for not being able to cope with pressure, but when you needed to produce the goods—in Czech Republic and Belgium—you stepped up.
Yeah, this came from last year when Jeffrey crashed and was injured and it seemed like everybody was waiting for me to win the GP [2013 British round] and it didn't happen. I crashed and rode with a lot of pressure. I was so tight. But I learned from that. I think I am getting stronger mentally as well as physically, and now I can do it. I think I showed that this year. I won at Loket and almost in Lommel.

What does pressure do to you?
When I can feel it, then I think too much about how I’m riding and what I have to do. This approach doesn’t really work for me. I get too tight on the track and enter corners thinking, “I don't want to crash.” Sometimes you have to think, “Just go for it.” You might make a mistake or fall off, but it's the way I have to do it.

There have been some contrasting emotions for you in such a short time frame. You were down, then a GP winner for the first time, not offered another KTM factory contract, dropped from the French Nations team, but now suddenly you’re in a position to win the championship.
Yeah! I agree with you. I really don't know why I am not on the Nations team. I was one of the best French riders in GPs this year, and have been on the podium more than Ferrandis and Febvre. I’m the only other guy who can be world champion in MX2 this year… but still I’m not on the team. However, I’m not the boss and it is like this. I raced last year and it was a really good experience for me. Two-thousand-and-fifteen will be at Ernee in France, so hopefully I can be there for that one.

Has it been weird in the team—the whole dynamic with Jeffrey and his role as world champion and team leader?
At KTM we don't really have this structure. There is not really a number one and number two. We both have the same engines, resources, and all the people around us are the same. I don't feel like I am number two. Now that Jeffrey is injured, there is more attention around me and that creates a bit of pressure, but we are working hard.

There were some rumors you were not happy with the bike at the beginning of the year.
We didn’t get that much testing done during the winter. I rode with the old bike all through the off-season and didn’t get the new engine until the first race in Qatar. It was difficult for me because I didn’t have any time with it. I found it really aggressive and I couldn’t ride with it. I used it for the first GPs but then switched back to the 2013 model and got my first podium in Bulgaria [round five] and have been near the box since.

Did you work with the new engine or keep the ’13?
I kept the ’13, only changing to the new one for Lommel because you need a bit more power there. On the hard-pack I preferred the 2013 much more and will use it now until the end of the championship.

You are leaving the reigning champions for your last year in MX2 in 2015. How do you feel about that?
For me it was a dream to ride for this team. I used to see the KTMs on the TV and wished I could be a part of it. I’ve had a great three years, finishing fifth in the championship, then second, and now I’m second again. It was not my choice to leave. We had a lot of discussions, but then the choice was made that KTM want to focus on a young rider and didn’t want to have the best two in MX2 on the same team. I knew I’d have to leave and, that’s why I signed for Kawasaki [Monster Energy CLS]. I know they are really motivated for next year, and I think we will do a good job again.

You said—quite honestly—in a press conference that this was Jeffrey’s championship… but in a few days it could be your name in the record books.
I try not to think about it! For sure Jeffrey was the man in MX2 this year and won every race he has run, and this was his championship. He was faster than us, but this is the sport. You have to be here. Anybody can get injured. To be honest, I am dreaming a lot during the nights at the moment. If I can do it then it will be the nicest day of my life.

What about Brazil? It leaves you needing to score 24 points [down 23, but Herlings owns tie-breaker] in Mexico next week if Jeffrey does not make it back.
I’m not so happy with my riding and I know I can be much faster than this. My starts were really bad, and it was hard to pass on that track. I’m happy to be safe after the crash on Saturday. I got some good points, but I know it could have been much better and I could have been on the box. It will be a long week now, but I will have a few days of fun with the KTM crew. I know I have to do my best in Mexico and will see what happens. I’m 23 points behind and if things go well, then it could all come easily. But you can break an engine or crash hard and get injured. You wont know until that checkered flag. I will be confident in Mexico. At the moment I am the only guy [besides Herlings] who can be world champion, and so many people are speaking about it. It is hard to think of something else. For sure it is an exciting time. I hope my teammate can come back because it is a bit sad to win it like this, but I guess it is the sport.