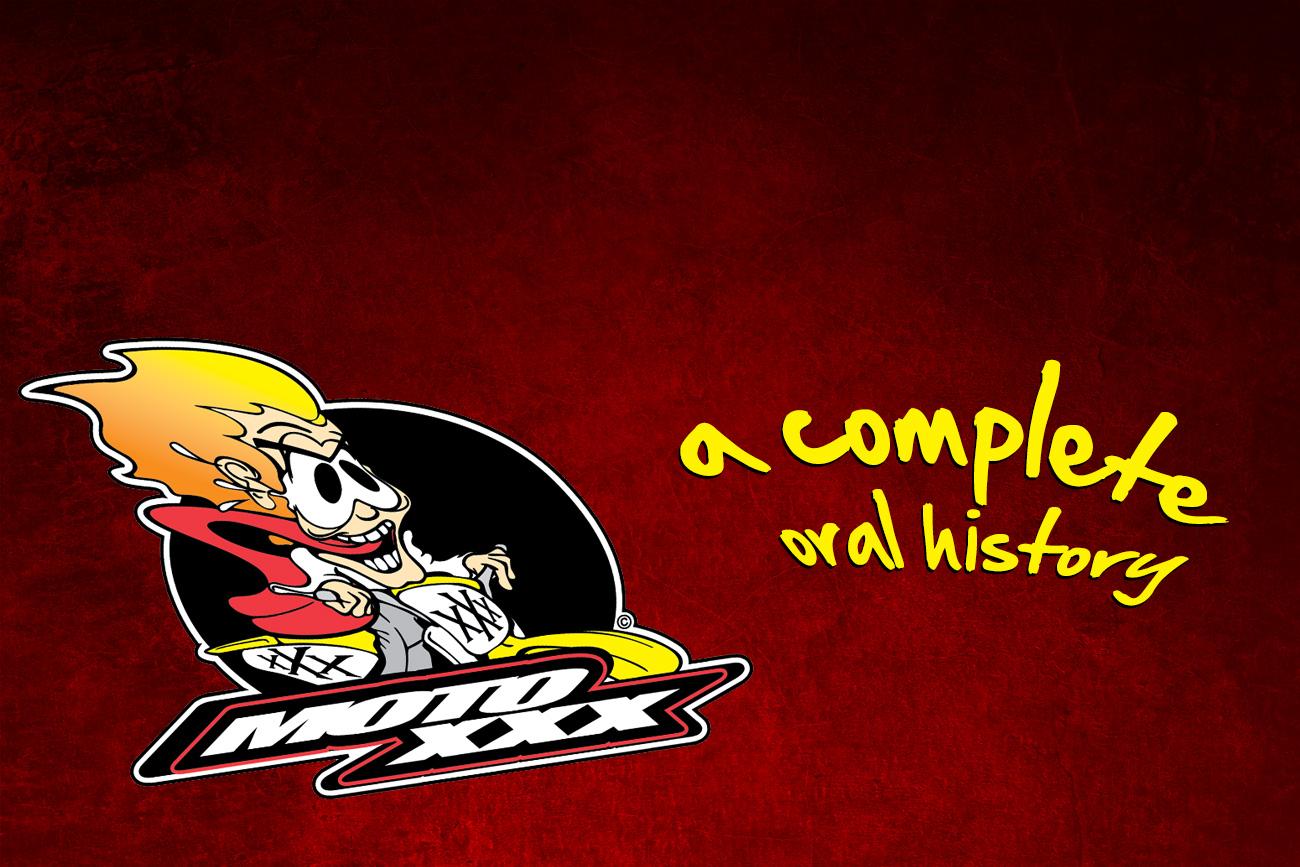 The team, started by Kurt Haller, Jordan Burns and Erik Sandin (Ed Note: Despite repeated requests Kurt Haller declined to be interviewed for this story) lasted for eleven years in various incarnations, through different managers, different bike brands and different ways of getting to the races and it’s hard to tell the whole story of the team unless it’s through the words of the people that lived it.

Sandin—“To be honest, when the team first started I was hands on at the office a lot and making some decisions. But as the team became more successful and my band started doing more, I became just a fan; I didn’t want it to be work. It took away some of the attachment dealing with some of the idiots in the industry. People who say they were going to pay us X and then when they didn’t; just say, “Take us to court.” Or sponsors back-dooring your product and selling it when they weren’t supposed to also sucked.”

Roegner—“Almost every other day Jordan would call in to bench race with us or he’d want some clothes and stuff. Kurt would shut him down but we’d end up sending it out in the end. Between Kurt, Smelly (Erik) and Jordan it was always an interesting dynamic on the phones.”

Lewis—“Getting on the Honda four-stroke for 2002 was a big thing for me. My Yamaha’s were down getting modified for the new year when I rode that bike. After I got off I was, “You’re shitting me, I have to race against people riding this thing?” and I remember begging Savino to give me anything he could. I knew I had to get on the Honda and it was unfortunate that right before supercross I weeded on it going like 100 mph. So that set me back a bit before the year.”

Alan Brown, Lewis’ mechanic—“In 2002 my buddy Steve Matthes said I should call Kyle Lewis, he was looking for a mechanic. I was working at Factory Connection and came home from the MXDN and found out I didn’t have a job. I was on the couch and not sure what I wanted to do next. I called up Kyle and it went from there.”

Brown—“At first I didn’t know Kurt that well but the more I got to know him, I realized that he was a smart guy. Jordan was a super-fan, not very grounded and realistic about things. He had the bullhorn and all that. Erik was just a quiet behind the scenes guy, he just wanted to hangout and wasn’t looking for the spotlight. He was a fan of the sport and always into it.”

Wey—“I was on Yamaha of Troy and they approached me at the end of the Nationals—I think it was Erik who talked to me but it could have been Kurt, I don’t remember—and although it wasn’t where I wanted to go I respect anyone who wants to hire me to ride for them enough to listen to them anyways.”

Lewis—“I would get off the bike and make phone calls to our sponsors—we all pitched in to make the team go from day to day—and then I would get back on the bike and finish my motos. It was unlike any other deal I had ever had.”

Steve Matthes, mechanic for Wey—“I was all set to work with Larry Brooks at McGrath’s team for Ryan Hughes. I wasn’t getting along with Harry Nolte, the lead motor guy at KTM, at the team I was at so when Larry told me I had the job, I told KTM that I was out. That very weekend Hughes KO’s himself on the works Honda 450 and has to retire! So Brooks started to backpedal, I went back to KTM to try and get my old job back and they were like, ‘Uh, no, you’re out.”

Wey—“I was making 40K at Yamaha of Troy and then despite my deal with the McGrath team falling apart, I still ended up making 60K from O’Neal to wear the gear so I had all this drama in finding a ride and then I ended up making 20G more, which was sweet. And then on top of that HJC paid me some cash to wear their helmet—I was doing pretty good!”

Ward—“No one from the team really bothered me at all, there were no autograph sessions to go to, but in supercross that year, Jordan would show up and things would get out of hand. He had a loud speaker, there was a wet t-shirt contest and all that—it was a little nuts.”

Burns—“All I ever wanted to do was give shit away and get in trouble.”

Wey—“Matthes was my mechanic and I didn’t really know him. He would let on that he didn’t know what he was doing, which made me nervous, but I think he actually did know what he was doing. He drove the box van around the country for me that year and we formed a little team within a team.”

Matthes—“Nick’s mom took care of the bonus program, it was 10 percent of purse and Yamaha money. I did ok because Wey was really good that year.”

Lewis—“I crashed early in the year, hit my sternum and ribs and it hurt to breathe at times so that was tough. At first I ran a bone stock Honda with just a pipe, I didn’t know the bike yet and didn’t know what I wanted to do. The last race in Vegas we finally got a set-up that I liked. I rode it and I knew that I was going to kill it. I loved the motor. I got every start in Vegas and really, the rest of the season my starts were so good.”

Matthes—“One thing that there was a problem with early was the tires that the team had signed with. The issue being that Nick really didn’t like them.”

Lewis—“I rode the tires and they had good initial bite. They weren’t that bad but they had money for the team and they made promises that anything that we wanted we could have in two weeks. And the ones I rode weren’t bad but I stressed to them we had Larry Ward who could be a nut-bag about set-up and that we would need constant evolvement with the tires.”

Wey—“There was an issue with the tires that we were contracted to use. They didn’t work very well and Lewis had set the deal up. He thought they worked great and he didn’t seem too concerned with the performance of these things in supercross because he would just get into the main and ride around. I wanted to try and get into the top five. I would bet that he got a cut of the tire money and that’s why we went with them—that’s just what I thought anyways. I don’t know for sure.”

Lewis—“They are a huge tire manufacturer and they had the money to do it so it seemed promising, but in the end they over promised and undelivered. Testing with the guys in Georgia and I can remember Larry Ward getting off the bike and saying, “Wow, that’s a bad tire” and pointing at it.”

“Soon we realized that the tire thing wasn’t going to work. Brian Fleck at Dunlop saved us; he was great to give us product when he didn’t have to. I think he took pity on us; he was, and is, a great guy. If he’s reading this, thanks, Brian!”

Wey—“At the beginning of the year we would race back to the van (after the race) and switch the Dunlops off and put on the other brand. It was pretty funny until the tire guy got wise and started going down to the starting line. That was not very funny for him.”

Matthes—“It was ridiculous. It was like a NASCAR pit change with Nick still in his helmet from the main and us changing the wheels with the other tires on so it looked like we just raced with them. Then we got caught and my only response was to shrug my shoulders and blame Nick.”

Sandin—“I remember being on the phone with the Suzuki higher-ups and I was trying to sort things out because I didn’t want to take an opportunity away from Nick. And that was what our team was first, we’re friends and we don’t want to hold anybody back. But at that point we had about 60 grand invested in Nick, and Roger was up our asses about releasing him. And he wouldn’t pay a penny. He wouldn’t pay and I thought that was such an insult to Nick and us. Like, here’s the big powerhouse thinking they can come in and pull a rider away and not have any repercussions.”

In the end, the Suzuki deal didn’t work out for Wey but he did end up top privateer in the supercross series that year. All in all, not a bad year for a rookie in the class…

Wey—“My results that year were a bit of a letdown because of what I had done on a 250 for YOT, but at the same time it was alright. I thought my YOT rides from 2001 were good enough to get a factory Honda ride, then the MC ride, but in the end I had a box van. I think we did pretty good for what we had, if I had more support maybe I’d have done a bit better, but what are you going to do?”

Matthes—“I’m not sure how Wey says his results were a bit of a let down. We were in a box van, he was seventh place in the SX series and top privateer that year with me sleeping in truck stops and showering with a hose by a ditch.”

Soon the outdoors came and now it was Lewis’ turn to shine. Ward was still putting in good finishes in the 125 Class and the #23 Honda veteran was really riding well in the 250 [now 450] series…

Lewis—“ I had a great outdoors. My bike was smooth but fast. You could ride it for hours and it wouldn’t tire you out.”

Wey—“It was the first year of the Honda 450 and Kyle rode great outdoors and getting associated with Yoshimura on the four-strokes was a great move. Those bikes were pretty good for those guys. The team seemed to be on the upswing and was moving into a semi and all that.”

Lewis—“My success was a combination of everything. I was feeling good and the bike was great. It wasn’t any one thing; the team helped out by letting me do my thing. I was happy with Alan being my mechanic, the bikes were awesome and everything was good.”

Brown—“We had a really good year, supercross went OK for Lewis, but outdoors he was on the new CRF450 and he killed it. He earned his permanent number that year, which meant he was top ten overall. That was pretty good I thought.”

Wey—“The guys weren’t involved that much with the racing end of things, Erik and Jordan wanted to high five and just be there. I spoke with Kurt a lot, though. There were three of us on the team and we were all kind of high profile.”

Burns—“Our results blew my mind. I’d get so pissed because we never got recognized at the Supercross banquets as Team of the Year. They never gave us any credit at all. And I felt disrespected. We did this year after year and got zero recognition. What was up with that? That stuff made me mad but on the flip side of that I was blown away at how we had the top privateers indoors and out year after year.”