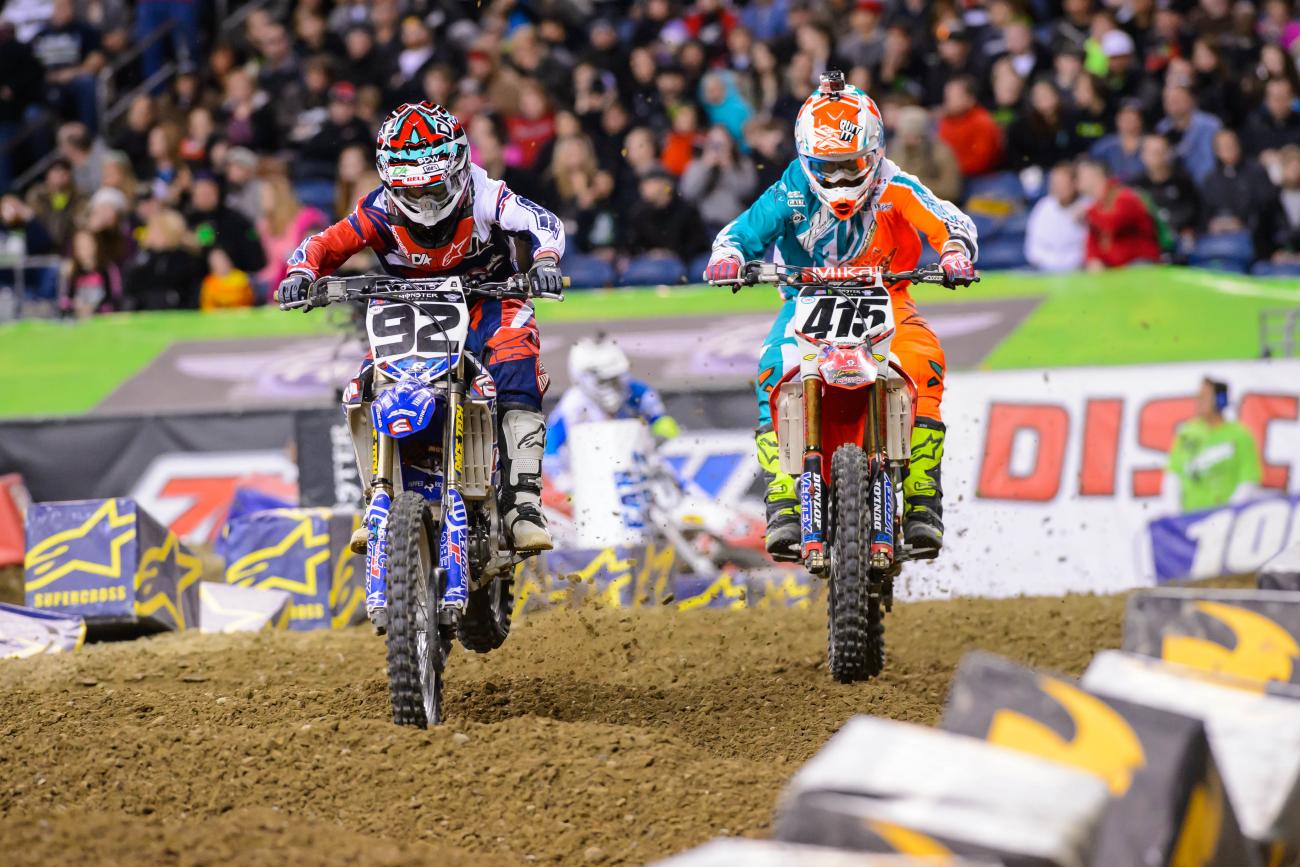 Honda Muscle Milk Justin Barcia’s streak of three consecutive podiums came to an end in Seattle. “It was a tough day. I struggled a lot with bike setup and the track was really challenging. Going from east coast to west coast dirt and track conditions was difficult and I wasn't able to adapt or find the right settings today,” said Barcia in a team statement. Barcia’s fifth was his worst finish since Daytona.

Barcia’s Honda counterpart, Eli Tomac of GEICO Honda, had his best finish since a second in Indianapolis. While his fourth didn’t land him on the podium, he felt this was his best ride of the season. “It was the best for me. The other race I got the podium it didn’t really feel like a real one because obviously the best guys kind of crashed. A podium’s a podium, but here we are. This was my best race,” Tomac told Jason Weigandt following the race.

The JGR/Toyota Yamaha squad had a completely different look than they did one week ago in Houston, as both Justin Brayton and Josh Grant were injured at that race. Brayton is expected to be out for a few weeks due to assorted broken bones and a knee injury. Grant, who was banged up in a huge first-lap pileup, might be back sooner. “Phil-In” Nicoletti getting the call wasn’t a surprise, as he’s the designated third rider. But Vince Friese’s deal was a late move. He only rode the bike for 10 minutes on Thursday press day before heading out for Saturday practice, where he had a big crash. Overall, a rough weekend for Friese, who made the main but went down again and finished 21st.

If Grant doesn’t make it back for the next race in New Jersey, Friese has a tough decision. He’d love to get another shot on the factory Yamaha, but he’s a 250 SX East rider and is currently fifth in the standings, and is within 20 points of passing the idle Adam Cianciarulo with two races left. Fourth would be nice, but Friese finished in that spot last year and didn’t get a big money deal anyway. As for the 450s, he has an outside shot at the top 20 in points, which pays about $8000. However, the rules say if a 250 rider elects to race a 450 on a night when his 250 coast is racing, he is designating himself as a 450 rider, and if he finishes in the top 20 in 450 points, he loses 250 eligibility for the next season. We talked with Friese about all this on Saturday morning, and he summed it up with, “I probably need to go talk to the AMA guys and see how it all works.”

Friese only scored one point in the 450 main, which hurt his top 20 chances anyway—he’s now 20 points behind 20th place Jake Weimer, who should be returning to action in New Jersey. Plus, Trey Canard is now 21st, one point further back. Jimmy Albertson, who as a privateer probably wants the $8000 top-20 bonuses more than Canard or Weimer, is one point further back.

Chris Blose blew an engine in Toronto and couldn’t race. Since then he’s reeled off his three best finishes of the season. What the heck is in his new engine?! Blose told us he’s just finding his mojo—and he actually salvaged most of that blown engine, so it’s the same spec. By the way, Blose is definitely winning the “pitting out of a rental car” class.

James Stewart gives you a behind-the-scenes look at his day in Seattle.

Last week we profiled the trials and tribulations of privateers Topher Ingalls and Jake Mohnike, after they had their bikes, gear, etc. stolen in Houston. Although Ingalls was unable to make it to Seattle, the Strikt Slaton Yamaha team, which consists of riders Zack Freeberg, Scott Champion and Preston Mull, stepped in to help Mohnike. They let him pit with the team and loaned him Freeberg’s practice bike to compete on in Seattle. Mohnike fell short of making the main, but it was great to see Strikt Slaton Yamaha step in and help the privateer.

Lucas Oil/Troy Lee Designs Honda’s Jessy Nelson had the breakout performance we’ve been waiting for in Seattle. While the 2012 MX Rookie of the Year has battled injuries throughout the season, he has still finished inside the top ten at every round, but had failed to crack the top-five until Seattle. His fifth tied a career-high set in just his second professional supercross race in Phoenix last year. For most of the race, he was running in fourth, until Dean Wilson made a late pass.

Lucas Oil/Troy Lee Designs Honda’s Malcolm Stewart’s ninth in Seattle was his worst finish since a 16th in Oakland. Stewart was coming off back-to-back podium performances in San Diego and Houston.

Stewart had a ferocious heat race battle with Zach Osborne for second, then when leader Dean Wilson crashed Osborne nearly got the win. The GEICO Honda rider was looking good for the main event, but it didn’t come together. "I just blew the start," Osborne said in a team statement. "I was like 15th on the start and had a mediocre ride to sixth. I feel like I really let one slip away from me tonight. Being on the podium seemed to be within my reach after the heat-race ride. I'm a little disappointed."

Jake Canada took control of the “top privateer” in points with an eighth in Seattle. Canada now leads Michael Leib and Dakota Tedder by three and four points, respectively. Canada’s deal with 51Fifty Engery is SX only, so he is still looking for something outdoors. Check out RacerXOnline.com later this week to hear more from Canada.

If you missed Lucas Oil/Troy Lee Designs Honda’s Shane McElrath’s crazy crash in his heat race, check it out here:

There’s Super Bowl Championship fever in Seattle, as a ton of fans were wearing ‘Hawks jerseys. On the track Tevin Tapia was running the full Seahawk paint job on his helmet, and he made the 12th man proud by making his second main event of the year. Also, the SmarTop MotoConcepts team—based in Spokane, Washington—had Seahawks livery on the graphics and gear of Mike Alessi and Colton Aeck.

A Night of Firsts: Privateers Chad Gores (17th), Ross Johnson (19th), Collin Jurin (20th), Ryder Steffy (21st) and Johnny Jelderda (22nd) all made their first 250SX mains of 2014 in Seattle. In 450SX, Bracken Hall won the LCQ in dramatic fashion to make his first main of the season. He finished 22nd on the night.

After making just one main (Anaheim 2) through the first four 250SX rounds, privateer Chris Howell has reeled off four straight. Following a season-high 15th in Seattle, Howell trails the injured Darryn Durham by one point for twentieth in points with only Vegas remaining.

Aaron Siminoe made his first main since Oakland in Seattle, finishing a season-high 16th.