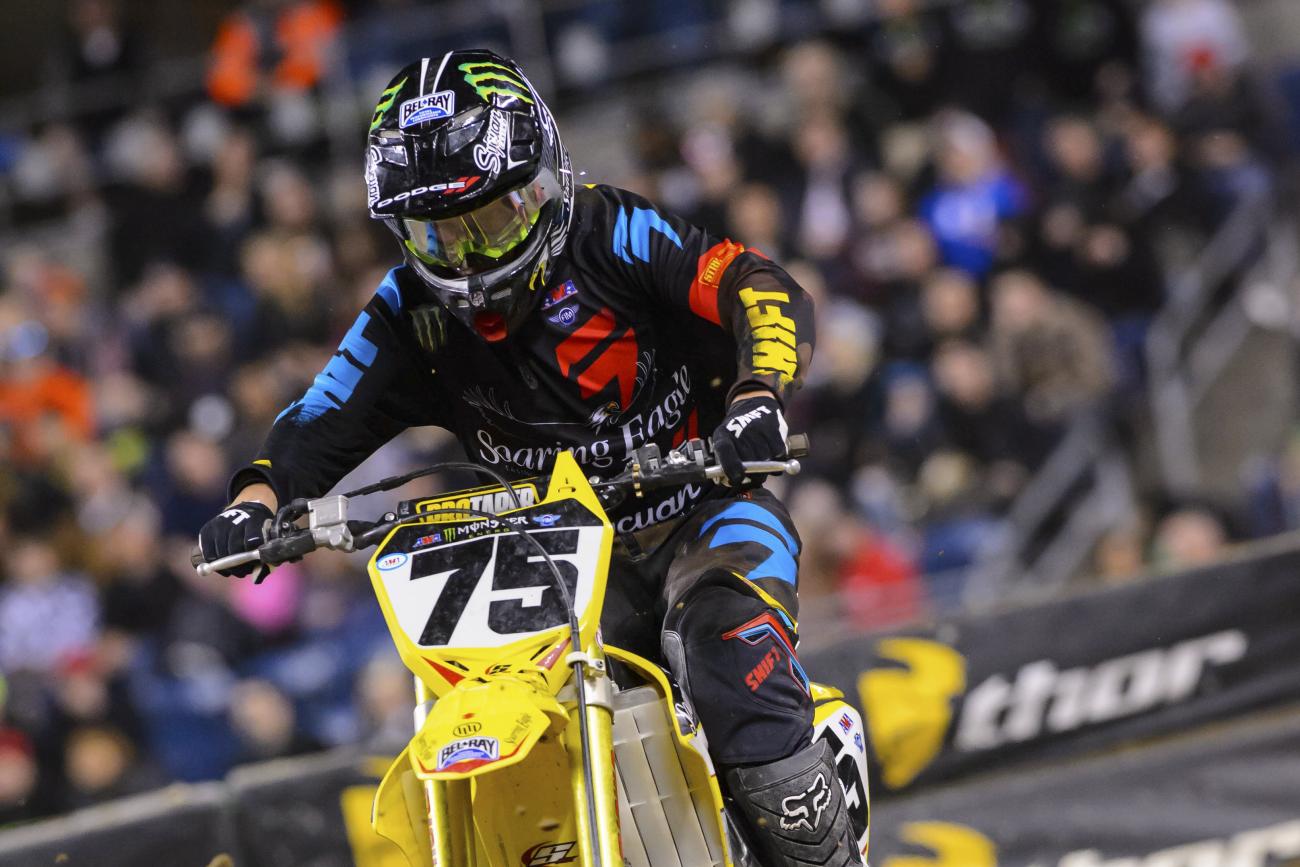 Last week in 450 Words we put together a piece on Josh Hill’s run of up and down luck over the last few years. Little did we know his year was about to grow even more dynamic. Two days after we posted the story, the Soaring Eagle RCH Suzuki team announced they were not going to support Hill for the Lucas Oil Pro Motocross Championship, and they instead would hire Weston Peick in his spot (and also bring on Ivan Tedesco as a fill-in for the injured Broc Tickle).

Now, Hill is going to ride out the final two Monster Energy Supercross rounds for the team. What comes next? We asked him about it all after Seattle.

Racer X: Man, another bad start. Didn’t you used to be able to get starts? The starts, bro!
Josh Hill: It’s not me, man. I’m getting the best jumps out of anyone and we’re having some issues.

I don’t remember you being a notoriously bad starter.
There’s some stuff going on. I’m not happy. I feel like I could run up front, but I couldn’t buy a start if … There’s no way I could buy a start right now.

I feel like the last couple weeks you’ve started to ride better.
I finally started to feel real healthy and I’m confident in myself. In Detroit I jumped the quad no one else did. They changed it for the night show. Last weekend we were in Houston and I was the first guy to jump that thing. Then today I was the first one to hit that quad. Maybe even the only one in practice to hit that quad. The confidence in myself is coming back. I’m having fun riding. Riding and practicing, I’m having a blast. It’s just the races, the main events haven’t been going so good for me because I’ve been starting outside … if I start mid-pack, tenth place, I’m like, “Yes, I got a good start!” So it’s been rough.

Was the hometown vibe cool? Is it always fun to come up here?
Oh yeah, I had a blast. That semi, once I got in the lead … that was just like a parade lap. I just went out and threw whips. Just kind of showed off and had a good time. All in all the weekend was good, just the bent rotor in the main kind of messed it up.

How’d that happen?
I don’t know. I hit somebody around lap six and bent the rotor on my rear. I couldn’t tell what was going on. I thought maybe I blew out spokes. I couldn’t tell what was up because the bike just felt like it wasn’t going anywhere, but then at times it wouldn’t really bother it. When I’d let off the gas it felt like something was wrong. It threw me off for a couple laps but I put on a last-minute charge and got up past [Mike] Alessi. I actually almost caught up and got around [Ken] Roczen and [Andrew] Short but just kind of ran out of time. I took a stab at Short on the last lap but didn’t feel like pushing the envelope and making contact and being that guy on the last lap. So I ended up ninth and two more races to throw this thing on the box, because I know I can.

Do you have a comment on outdoors and what even happened? Were you even supposed to ride outdoors for this team?
I was supposed to. It wasn’t a performance-based contract at all. I was supposed to race outdoors, but like I said we’ve been disagreeing on a couple things on the motorcycle and we’re going to part ways. It’s nothing against the people at RCH. Carey Hart, Kenny Watson, I have nothing but love for those guys and nothing but great things to say about them, and pretty much the entire staff. They’re some of the greatest people I’ve ever worked with. It caught me off guard but it may be for the best. I’m just going to move forward. If I can get on a good program for outdoors I’ll be there. If not, I’ll regroup and try to just keep making myself better and come back for supercross, hopefully.