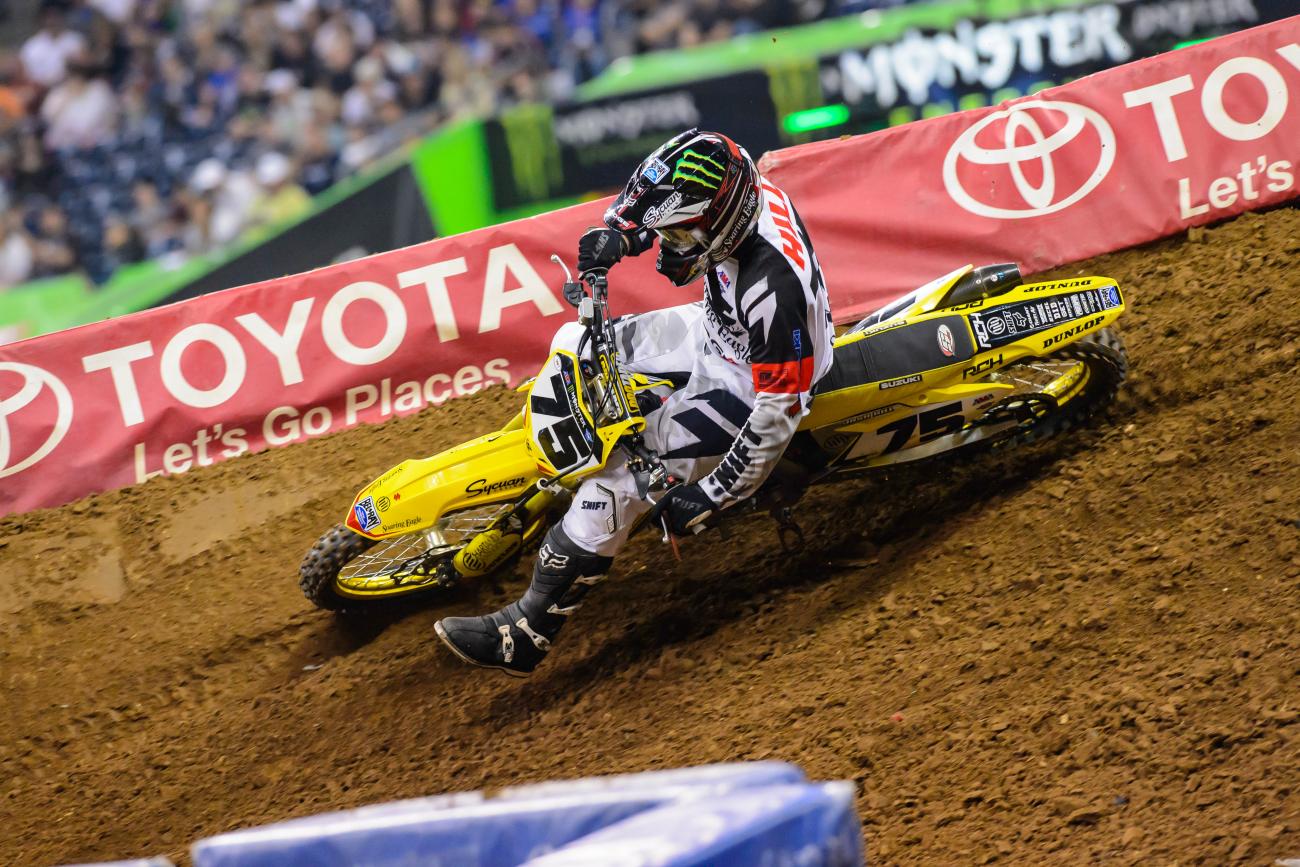 Fifty-one weeks ago, Josh Hill finally reclaimed some ground. After years of injuries, setbacks and false starts, he won a heat race in Minneapolis. Normally, a heat race win isn’t much to celebrate—heck, the AMA doesn’t even keep official stats on heat race wins—but it was a big moment for Hill. He’d been fighting for three years to just get anything, just something, going.

The speed in that heat race proved he could make it back from massive injuries incurred back in 2010. But it didn’t send the walls tumbling down—his best main event finish of 2013 ended up being seventh. With a SX-only contract, he fell off the radar again when Lucas Oil Pro Motocross began. He went to Australia during the off-season and appeared to have a championship in hand, but it was ripped away during a controversial rough riding bout with the Moss brothers. Then he lost whatever momentum he’d built in Australia when he wrenched his back before Anaheim 1. Just as he was getting back on track from that, he broke his collarbone … the same old spiral, again.

Ever since Hill broke his leg and smashed his foot attempting a backflip in the summer of 2010, it seems like every season is a make-or-break for the former amateur phenom. Every time he starts to rebuild momentum, another set back sets in, like a first turn crash in the very first turn of his first heat race at Anaheim 1, 2012, and a practice crash and broken hand at Anaheim 1, 2013. Momentum stopped, momentum stopped.

He keeps clawing, though, and found himself with a season-best seventh last weekend in St. Louis. Injuries have started to deplete the 450SX field now, and Hill is surely glad to finally not be part of that list. He seems to be getting faster each week, and he blossomed in Houston, looking fast, loose and relaxed all day. Hill was one of the first to jump the big quad before the finish line. He was throwing his bike flatter and flatter over the jumps. He was fifth fastest in practice, then grabbed a rare good start in his heat race and led for a bit before dueling with Ryan Villopoto. When RV went down, Hill had the lead again, and took off for another heat race win. It took 51 weeks, but he had himself another small victory in the U.S.

Unfortunately, more misfortune was coming. In the main event, Josh smacked a tuff block in the first turn and went down. He started in last. He rode well coming from 22nd, and finished 13th.

"The heat race went well," said Hill in his team’s post race recap. "I felt really confident in practice… I was jumping a section that not many people were doing and just felt great. It’s unfortunate to have a fall in the first turn! I really wanted to get the holeshot, but ended up running out of real estate—me and James kind of bumped and I hit the deck."

As before, a step forward and a step back. It all leads to another make or break season, again, for Josh Hill. Lets see what he does with it this time.