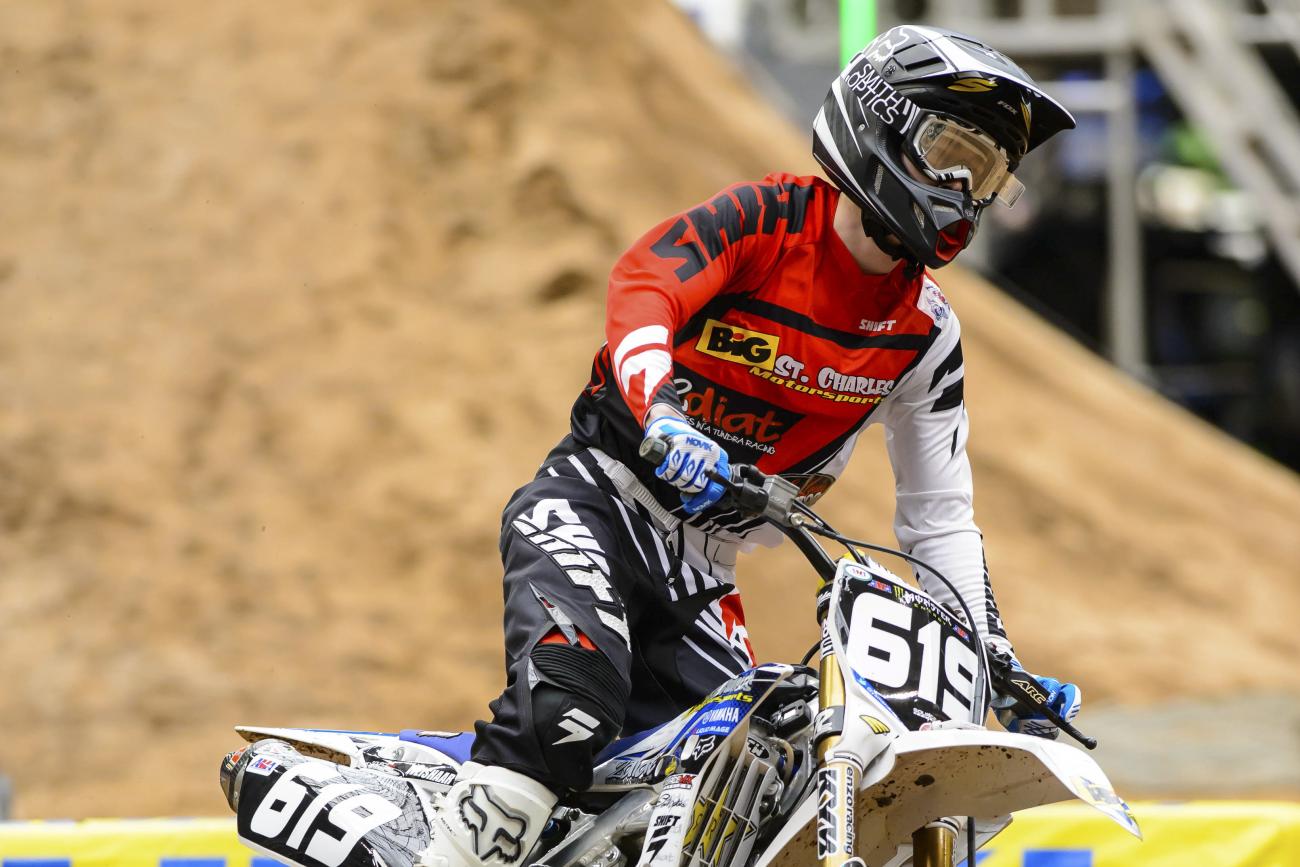 Mark Weishaar gained notoriety a year ago traveling the country from race-to-race with Chad Crawford in just a Toyota Tundra. Under the moniker 2 Dudes In A Tundra, a number of publications, including Racer X, featured the duo. Mark is back this year, along with Bubba Pauli, trekking across the country, fighting for spots in the main. As we found out, though, there is much more to Mark’s story than just a Tundra. We caught up with the Illinois native today as he shuffled from classes.

Racer X: You mentioned that you were on break from class, where do you go to school?
Mark Weishaar: I go to SIUE (Southern Illinois University of Evansville).

So you attend college full-time while also trying to make a career in supercross?
Yeah, pretty much.

How do you balance the two?
It’s a juggle, to say the least. I have it set up where I go to school Tuesday and Thursday, but I go from 8 a.m. to 8 p.m. pretty much. I have a break for lunch in-between, but that’s really it. Going to school on Tuesday and Thursday isn’t the worst part, it’s trying to get the time to study around everything.

Do you get a chance to ride during the week?
No, not really [laughs]. The week before St. Louis and the week before Houston I got to ride a couple days. But the rest of the supercross season I barely got to ride once.

Last year you had the 2 Dudes In A Tundra setup. Are you doing the same thing this year?
This year we still have the whole 2 Dudes In A Tundra thing going on. I actually have a different rider doing it with me this year. Chad Crawford, who did it with me last year wasn’t able to race this year because of his knee, so I brought on my friend Bubba [Pauli]. It’s still the exact same program. Last year through the exposure we got through Racer X and other publications brought on an awesome title sponsor this year. Big St. Charles Motorsports, which is a local dealer, came on. We can’t thank them enough because they made it possible for us to race this year.

For those who aren’t familiar, explain what 2 Dudes In A Tundra is.
2 Dudes In A Tundra started out with me and my best friend Cody going to races on the weekends in my Tundra. People started joking and calling it that, and I was like you know what? I can probably run with this. Last year we changed it up and it was me and Chad as the two riders. Every weekend we load everything we need for the weekend into the truck. No trailer. No covering. Nothing.

Obviously with two guys in a truck traveling the country for hours on end has to wear everyone thin.
The worst is the weekends where I have class to Thursday night and we can’t leave until Thursday night and we have to drive through the night. Those weekends are the worst because we are all running low on sleep. Tensions get high for sure. You could poke someone and have them freak out on you afterwards [laughs].

What is it like to travel the country and do what you’re doing right now? It has to just be a fun thing for you to do?
There are a lot of people that dread the payout and how much money it costs to race, but as long as I can keep coming up with the money to do it throughout sponsors—and my parents help me a lot—why not keep doing it? Every weekend is a blast for me. I get to travel around to all these awesome cities and race my dirt bike on top of it. The traveling is a bonus.

What made you decided to further your education while riding professionally?
My parents are behind me one hundred percent with racing, but they said if they were going to be behind me in racing I had to be one hundred percent in school as well. So as long as I keep my grades up and in college full-time, they will help support me with my racing. It started out as a big fight with them, but over time I’ve come to the realization that this is probably for the better. If I can stay in school and keep racing, it’s probably better to do both. There are times where I wish I wasn’t in school and could be in Cali for the first five rounds rather than doing my first two over Christmas break. But it has to get done sooner or later.

You finally made your first main in Houston, which had to be a big weight off your shoulders.
Once I saw how the West Coast was setup I pretty much based my year off that. I have been riding my 250F in the 450 Class for all the East Coast rounds and I knew going to Houston it would be make or break. I went in there saying I was going to make the main no matter what [laughs]. Luckily it worked out in my favor.

I think you are probably the only rider still riding a carbureted bike.
[Laughs] Oh, yeah. I know for a fact I am. I love my race bike, I think it’s awesome, but people will come up and say, “Oh, you ride a carbureted bike? It bogs so bad.” But my bike never really bogs. I never have an issue with that.

What are the major disadvantages to riding a bike that’s two years older than your competitions?
The only disadvantage I can see is that the 2012 stock Yamaha isn’t up to par speed wise, and now someone can ride a brand new 2014 Yamaha and it’s a race able bike. At the same time, my bike is pretty worn out.

What are your plans for the rest of the year?
Our plan is for sure to be in New York and hopefully that goes well and we can make it to Vegas. I wasn’t able to make it to Seattle this weekend because of school—I have three tests today that I couldn’t miss. Bubba is actually going to Seattle, so hopefully he does well up there.

What are your plans for outdoors?
We haven’t really finalized anything yet. The way it’s looking we will do all the closer ones to the St. Louis area, but we would like to start at the beginning with Glen Helen, Hangtown and Colorado.

I’m sure it’s a little easier without school.
Oh, yeah. Vegas is right after my school ends, so I could hit Vegas and be on the road for a while.