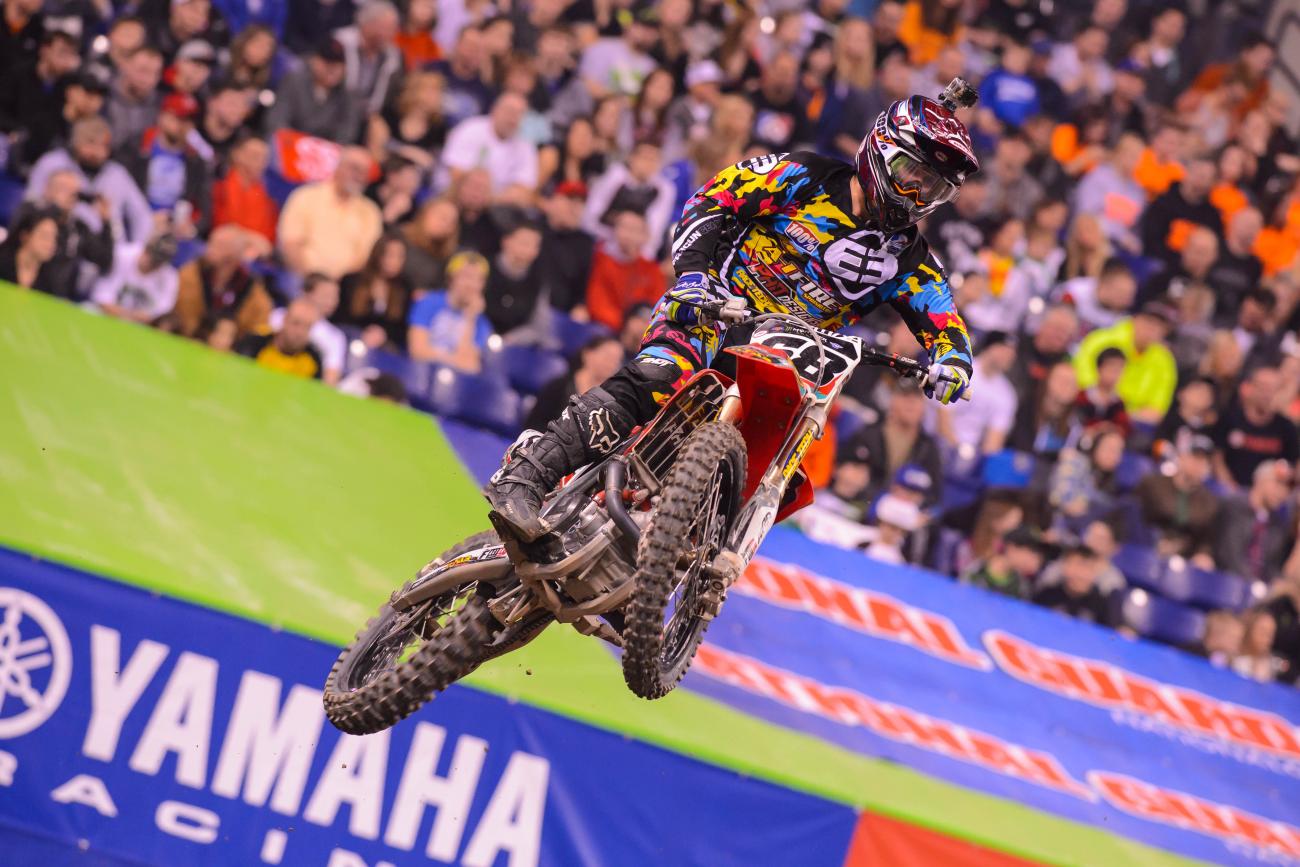 It seems like every year we’re on the phone with Chris Blose around November and he’s still trying to make plans for the upcoming season. While always a solid main event guy in the 450 class, with several top ten finishes to his name, the game of team musical chairs lags late into the off-season. Chris got a ride last year on the N-Fab/TiLube Yamaha squad, but this year nothing came together. So he grabbed his own 2012 Honda CRF450R and went to the races himself! His program has built from there, and so have his results. After a season’s-best 14th in Indy, we chatted with him yesterday.

Racer X: When we talked to you before the season, you said you had a plan to get to the West Coast races, but didn’t know what you were going to do for the East. Now we’re a few rounds in and you’re still going. What is your actual setup week to week?
Chris Blose: Yeah, the plan was to do the West Coast rounds and hopefully figure things out for the East Coast. Luckily the Factory Metal Works/Club MX team is able to take my bikes to all the East Coast rounds.

You pit out of their rig?
Yeah, kind of just off to the side. They’ve got their own team going and I don’t want to interfere with any of that. Very thankful for those guys hauling my bikes around.

Who else do you have with you? Do you have a mechanic?
For the West Coast I had a mechanic, and at a couple of the rounds I had Eddie Ray, you know, he’s Jessica Patterson’s fiancé and mechanic, he helped out in Atlanta. But I’ve just been calling around to the Honda dealerships and getting some certified mechanics to work with me at the races.

No way!
Yeah! It’s all on my dime right now, so anything I can do to cut down on the costs… flying a mechanic to every race is going to cost me another $500-$700 and I just can’t afford that.

So these have been dudes you didn’t even know?
Yeah. Last weekend I had Mitch Brown, who works at the Dreyer Honda dealership in Indy. I just called up and said, “Hey, my name is Chris Blose, I need a mechanic for the weekend.” They put me in line with Mitch. As crazy as it sounds it seems to be working out. [Laughs]

You might have stumbled on a great idea! What’s your during the week deal? Do you have a practice bike?
Yeah I’m training and doing that whole deal. You know here in Arizona there really isn’t a supercross track to ride, so if I ride I ride outdoors, and sometimes I just go riding on weekends.

Wow! And I assume you’re not making any real developments with your bike, because it’s stuck on the road every week.
Yeah, exactly. I just go there and race on the weekends. My bike is there and the mechanic can grab it on Friday and do oil and clutches and go through everything. I can’t really complain, I’m still getting to the races.

And the results have been pretty good. You’ve made most of the main events and Indy was your best of the year.
Yeah the last few rounds things have really been clicking. Last weekend I got 14th and hopefully we can keep improving that.

It seems like every off-season you’re stuck in the same situation. You’re making mains and doing well enough to keep on going, but it’s always dicey if you’re going to get a ride the next year. Do you have a long-term goal?
Pretty much wherever it takes me is where it takes me. I started working with a new trainer about a month ago and we’ve been making gains. I think it’s starting to show now, Atlanta I got a 15th and Indy a 14th, so I’m feeling better and better. Making mains isn’t really the goal, I want to make an impression on some people and hopefully something comes together for next year.

Would you do this same thing again next year if you have to?
You know, it’s not too bad, but we’ll have to see. Unfortunately as you know we’re not getting paid all that much, especially for someone who is paying for everything on his own dime.

With the purse and contingency, can you make money when you get a 14th?
Yeah, you can make money, but not as much as I would like to. For me to make the main event is awesome and that’s great and all, but that’s not where I want to be. I want to be up there battling with those guys, not just making the main event. So we’re trying to get further up there and make more money.

Were you really racing a 2012 Honda early in the season?
Yeah. I rode Monster Cup on it last year and nothing really came about as far as a ride for this year. So that was the only bike I had. Before Anaheim 1 I only rode like eight times, and I didn’t make the main event. I had some bad luck. We were having lots of problems with my bike, but luckily Testa Motorsports in Nevada, they helped me out and got me a new bike. San Diego was the first time I rode it.

And you have your own little business going on the side?
Yeah it’s something I started working on about a year and a half ago, Phit Designs. I wanted to stay in the industry somehow, I wanted to so something after racing. It’s been going really well.

So you’ve got your graphics on your bike?
Yeah it’s pretty cool because I can do whatever I want. It’s kinda tough to find time, but sometimes I can get it done and bring some graphics with me to the race. Like this weekend at Daytona I wanted to do a Dale Earnhardt theme, like an all-black bike and everything. I didn’t have time to get it done but it would have been cool.

Is it tough handling the job and the racing?
Nope, not too bad at all.

You would want to stay in this thing—your whole family is a motocross family.
Oh yeah. My dad raced, my uncle raced, my brother raced, so I’m like “Man, I’m pretty deep into this thing.” I’m in a moto family so I’ve got to keep the legacy going and keep the name out there. But most importantly, I’m having a lot of fun doing it.

Yeah, everyone always thinks the privateer thing is terrible because you’re at a disadvantage with a lot of things, but in the end, you’re happy to get on that bike every weekend and race?
Yeah and I’ve been there with being on a team and having expectations. This year being completely on my own, you kind of take a step back and realize why you do it. You realize that it’s awesome. I might be at a disadvantage not riding during the week, and having a random new mechanic every week, but I’m still having fun. And if I reach my goals, that makes it that much better.

And for these mechanics, here’s a guy who works service at a shop, and he’s packing the gate for a 450 supercross main event. I’d imagine that’s pretty awesome!
The guy last weekend, Mitch, I asked him if he’d ever been a mechanic at a supercross before. He said he never was—this was his first time every being on this side of the box. He had been a mechanic for his brother at Loretta Lynn’s, which was the closest he’d ever been to anything like this. It was pretty cool for him to be the mechanic for a supercross main event.