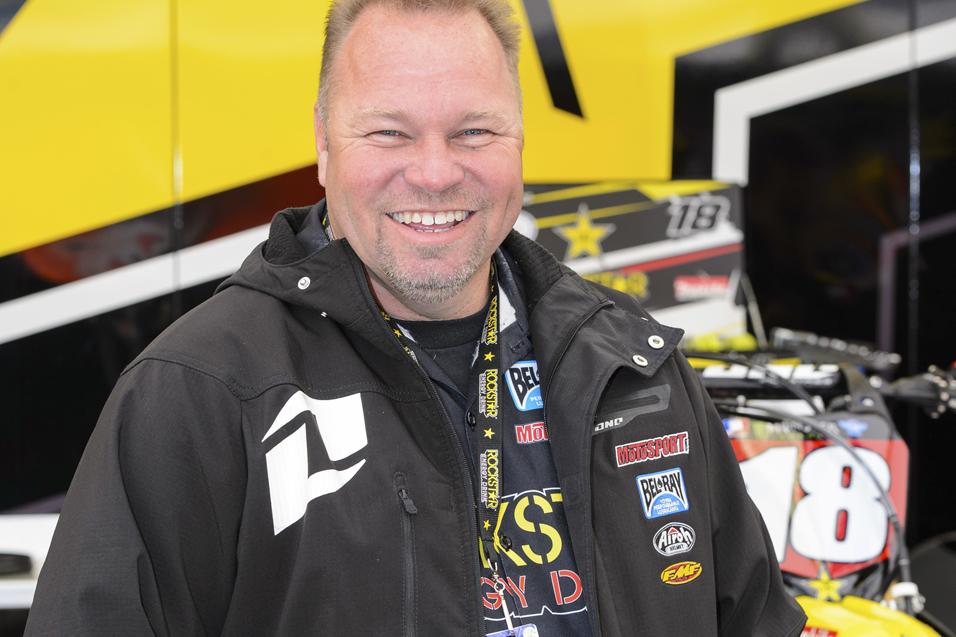 August 28, 2013 10:00am
by: Steve Matthes
Dave Gowland has been around a long time and knows a lot of people. He’s accomplished a lot in this sport, but he might be enjoying his greatest success as team manager of the Rockstar Racing team. In 2013, his rider Davi Millsaps won a couple of races and led the 450SX points for a long time, Jason Anderson positioned himself as a future star and Blake Wharton won a supercross. Under the watch of owner Bobby Hewitt, the Rockstar Racing team looks to be a team on the rise and for 2014, they’ve switched to KTM’s in a move they hope brings them more support from an OEM than ever before.

We caught up to Dave before his day started to get going at Lake Elsinore to get his take on the season that was just ending and the future.

Racer X: Dave, 2013 was certainly a good year for you, Bobby, and the whole team.
Dave Gowland:
We put a lot of focus on the supercross season trying to get Davi a title. And not that much went into the outdoors, and once we got started with motocross, we realized that we wanted Davi to win so badly that we didn’t focus enough on motocross and left something on the table.

As a whole, it’s been sort of, every since I started, one step up at a time. Slowly but surely we’ve tried to get support from Suzuki for a long time and obviously they had other ideas and teams they wanted to help out. Whatever, it was their decision and that’s fine. We needed support and felt like our results warranted some. We couldn’t keep going the way we were going, we needed a true partner and it came down to Yamaha and KTM for us.

Yamaha was very strong, the offer was really, really good and I can’t thank those guys enough. They did a real good job at putting things together but at the end of the day the KTM thing was just a little more appealing for us and the riders. I wanted to make sure the riders were 100 percent comfortable on the bike and I polled all the riders and had them tell me which bike they thought they could win on. And that was part of the decision—it wasn’t just financial reasons. We want to win and that’s who we went with. We’re really excited about it and KTM has been awesome. The communication has been unbelievable. It’s crazy how different it is from where we were to where we are now.

Was Suzuki in the running at all to step up and help you guys officially?
Steve, we’ve begged them and I’ve always tried to have communication in asking things and getting a response back. They just … I don’t know. I couldn’t tell you what happened other than I asked for support on many occasions. We didn’t need a lot, at least in our eyes, and it wasn’t from us not asking for help. We wanted to make it work and be a good partner with them. We’ve always told them that but, hey, look, sometimes it just doesn’t work out. They’re restructuring over there and obviously they didn’t think we were needed and they couldn’t do anything. It’s their decision and it’s not personal, it’s business. 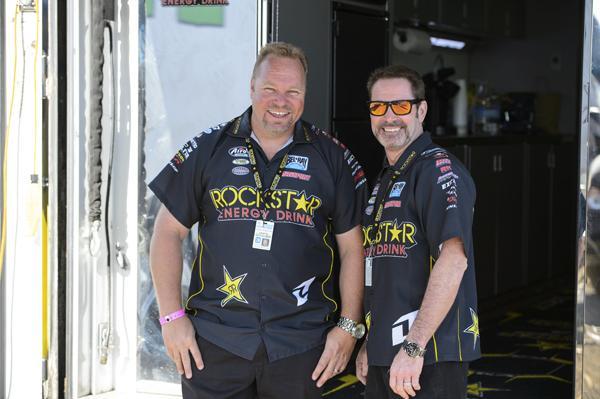 I think that 2014 we will see Jason Anderson really step up and be one of “the guys”. Can you talk about his season and having him on the team?
I think Jason is like Davi in the fact that Davi got on the Suzuki and was immediately comfortable and could go fast. Davi had ridden Suzukis before. And Anderson got on the KTM, he’s been on them before, and showed that he’ll have no problems adapting to the bike. We’ve stuck with Jason and he’s not going to be this guy who’s a flash in the pan. We’ve had him for three years and have him for next year. I agree with you, he’s going to be good but his steps to success are going to be a bit slower than some other guys.

He struggled at first but we stuck with him and it’s paying off for us now. I think we have a title contender next year.

Ryan Sipes, Blake Wharton and Nico Izzi won’t be coming back to this team next year, but can you talk about the seasons that they had?
I think Blake did what he did in supercross and we were kind of expecting that out of him. I did think that with the east being a bit weaker we would have hoped he would have done a little bit better, but still, he was great. Going into outdoors it was a shame that things turned out the way they did but with a virus like that, you just can’t predict how those things are going to be.

Sipes, we kind of moved him back and forth off the 450. He starts off good but then he hurt his back and then he had some mishaps and crashes. He fought with his hand and that gave him trouble. And Nico never got out of the gate. We had great hopes for him but he got hurt within the first week of having him, then we get him up and going, two races in and bam, he hurts his knee again. Someone wasn’t looking favorably on him this year! We got stuck that way and these are the things that plagued us in the outdoor season.

We’ve started testing, KTM has given us the bikes, we’re working on supercross and Davi’s been riding for a week already. His leg is great, his arms are good and the leg is just going to get stronger. He says the bike is awesome, the chassis thing is perfect and he says it’s similar to the Suzuki. The engine package they have is spectacular and is as good if not better than the bike we have this year. It’s great to have a family to lean on.

And Joey [Savatgy] is going to be good. He was the Rookie of the Year in supercross and Joey’s already been on the KTM. We’re rolling out with everything new, new semi next year, we’re going with just one but it will be new. New bikes, new rider and we’re trying to pick up where we left off this year.

You yourself have been around working with Team Green, then some IndyCar stuff and then Thor. But it looks like you’ve found a home here with Bobby Hewitt and the team.
The only reason I moved around in the early years was I followed Mark Johnson. Wherever he went, I went. I went back to Kawasaki because he was there in 2004 but then he ended up leaving and I was Team Green, then Thor and now here.

I’m very happy where I’m at, there might be some changes in the future, I might become a partner in the team where I have some ownership in it. So that’s exciting and I’m hopeful for that. This is family for me and now KTM is our new, extended family that’s really taken us under their wing. I’m really happy where I’m at, I’m never going to leave the race team. It’s where I like to be. 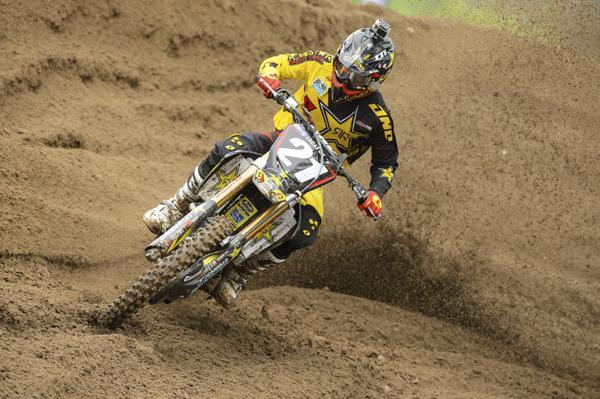 Jason Anderson is returning to the team next season.
Simon Cudby photo

Whenever I interview Davi, Jason or Sipes I ask them about Ross “Rollerball” Pederson and your career wrenching for the greatest Canadian rider of all-time. Can we get the riders on your team a little history lesson here?
[Laughs] My mom is getting close to retiring, so she sent me down all the old photo albums and she wanted to make sure I had them just in case. I’m thinking of putting a montage together of Ross and I and I’ll make sure everyone in the shop takes ten or fifteen minutes and goes through it.

Davi asked me one time who Rollerball was! I was disgusted.
These mechanics, the younger guys, they don’t realize that I was a mechanic. They just think I’m a pen pusher.