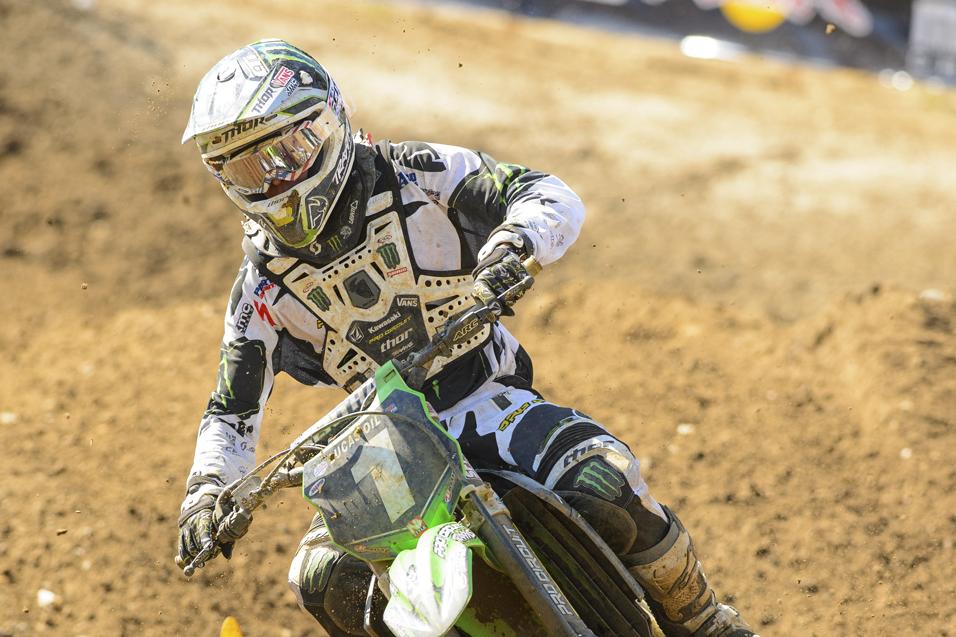 Get with the times with this week's Sign of the Lap Times.

Ryan Villopoto was just on fire in this moto. His average time of 2:01.728 (fast enough to stand alone as the third fastest lap of the moto!) was so blistering that it checked into the Asterisk Medical Unit immediately afterward to be treated for severe burns. He had some company in the form of Ryan Dungey pushing him, but even after Dungey went down on lap twelve, Villopoto's lap times remained low, resulting in an astonishing margin of victory of nearly fifty-one seconds! Take a look at the duo's silly-fast laps through lap twelve in the chart below.

Phil Nicoletti had a disastrous first lap of 2:34.748. Not suprisingly, he was in thirty-ninth place at the beginning of lap two. Things improved from there though, as the New Yorker steadily lowered his times for the next several laps. By lap six he was consistently clicking off laps in the 2:07 and 2:08 range, ending the moto in fifteenth.

You might expect a veteran racer of Mike Brown's vintage to have ridiculously high lap times by moto's end, but then again, Brown is no mere mortal. In his third decade of professional racing, Brown put his experience to work to pace himself at Budds Creek. He intially logged a 2:15.808, followed by a 2:14.989, but after that he settled in and went to work, even dropping into the 2:08 range on lap five. With a final lap of 2:13.618, Brown finished faster than he started. He ended moto one in twentieth.

Setting the fourth-fastest lap of the moto on lap two, fifth-place finisher Ryan Sipes continues to impress after jumping up to the 450 Class to take the place of the injured Davi Millsaps. Staying below the 2:05 range for the first seven laps (and just barely exceeding it on lap eight), his first-half speed was excellent, and even after that he didn't totally throw out the anchor. His slowest time, a 2:09.866, came on the second-to-last lap. Sipes, who missed most of the supercross season with injury and made the move to a 450 at the last second, gets a pass with his late-moto fitness for now, but if he can step it up slighly, he could be sniffing podiums in the second half of the season.

Not to sound like a broken record here, but surprise surprise, the Ryans laid down the law yet again in moto two. The only difference was that Dungey, who made some adjustments to his forks to better handle the choppy downhill sections, held the clear advantage in this moto, even after Villopoto worked his way into second place on lap five after a bad start. The lap times below tell the tale.

More often than not, a rider's fastest lap will occur early when he's fresh. From time to time you'll see a fastest time pop up in the second half of the race, but it's not the norm, and almost never does a rider set his fastest lap on the final lap. But that's what Broc Tickle did when he busted out a 2:03.338 on lap seventeen on a track that was more beat than 125 piston after a long day at Southwick. Barcia pulled a similar feat by posting his best, a 2:03.457, on lap fourteen.

Things looked to be picking up for James Stewart in the second moto. By lap six he'd moved into third place, but he lost a ton of positions when he went down on lap nine. He got back up and started to move forward again, but another crash knocked him back to thirteenth in the moto. It was his brother, Malcolm Stewart, that would end up with third. For kicks, let's compare the brothers' lap times through the first nine laps. 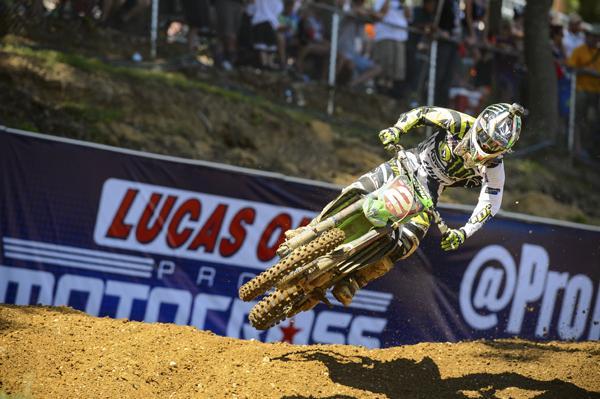 The elephant in the room here isn't an elephant at all, it's El Chupacabra! Blake Baggett returned to beast mode in the first moto at Budds Creek by flipping the switch and putting in one of his signature charges late in the race that saw him both take over the lead and set the fastest time (2:00.190) on lap fifteen to take the moto win. Below his laps are compared to the times of Marvin Musquin and Ken Roczen, who went two and three, respectively.

In the data above, you can clearly see that Musquin and Roczen had no chance of fending off Baggett's attack. But that didn't stop them from carrying on the battle they had going before Baggett went by. Roczen, who mentioned that he was still recuperating from a sickness he caught during the break, was just a little faster, but Musquin responded in the final two laps by stretching the lead back out ever so slightly.

Probably not the day that rookie Adam Cianciarulo wanted to have in his first pro race, but let's give him a break folks. It was, after all, his first pro race. He nearly snagged the holeshot, and he did manage to record the tenth-fastest lap of the moto in a field that was already four races deep in the season. Other than a 2:19.769 on lap eleven, his times were pretty solid, and the upcoming races will be the true test of his rookie mettle.

The main thing you need to know about this moto can be summed up in two words: Eli Tomac. Just how hard did Tomac drop the hammer in moto two? Cable companies across the country were swamped with calls from angry customers insisting that their remote controls were stuck on fast forward. Turns out, that's just how fast Tomac was riding in what our own Jason Weigandt later referred to as "The Charge of Death." On lap eleven, which was his fastest, he was nearly five seconds faster than Ken Roczen, who was the next fastest rider. It wasn't a scoring error or lucky lap either, as Tomac dipped under the 2:00 range on laps ten, eleven and twelve. To put things in even more perspective, his fastest lap in moto two was faster than every single lap of every single 450 rider in the second moto. Yikes! 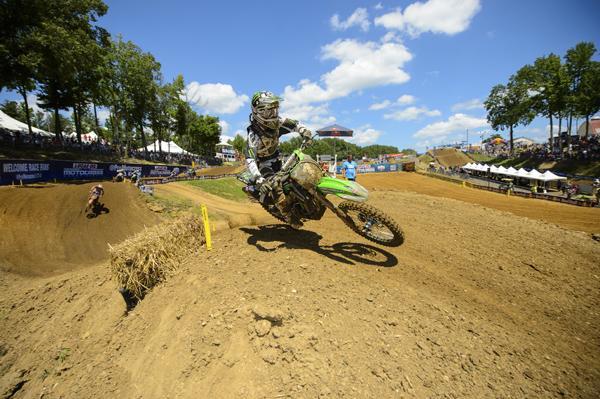 Great ride for Darryn Durham, who grabbed the early lead and led for ten laps. That's especially impressive considering he's been nursing a leg injury incurred at Hangtown. Predictably, his lap times were solid, only exceeding 2:06 four times, and one of those laps he crashed, while two of them were the final two. If Durham keeps it up, we're going to see another regular podium contender in the second half.

Although the results don't show it, nice ride for Cianciarulo, who finished seventeenth. After rounding the first lap in near dead last, he was forced to charge through traffic, which is reflected by lap times that never fell below the 2:07 range. The silver lining is that his pace held steady all the way through lap fifteen before dropping off. Not bad, considering it was his first day as a pro.

Check out the battle bewteen lap times between Zach Osborne, Kyle Cunningham, Justin Hill, Ken Roczen, Marvin Musquin and Wil Hahn. Their best laps are separated by less than a quarter of a second!