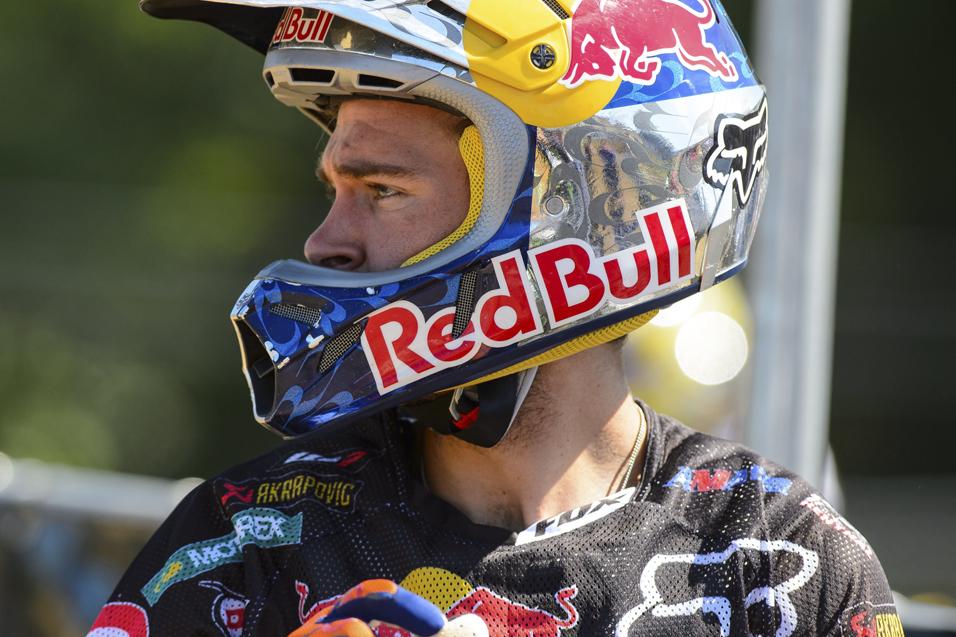 Advertisement | Advertise with Us
Budds Creek Motocross Park Mechanicsville, MD Budds Creek Lucas Oil AMA Pro Motocross Championship
Red Bull KTM’s Ryan Dungey now has two wins during this season’s Lucas Oil Pro Motocross Championship, but this weekend’s triumph at the Red Bull Budds Creek National was the most impressive. He showed the speed to meet or even exceed points leader Ryan Villopoto en route to his (2-1) victory. After the race, Dungey opened up quite a bit.

Racer X: Take us through your motos today.
Ryan Dungey:
The first moto was going really well. Was able to kind of close the gap, which was good. I felt like we were really running strong and then lost a little bit of time in the lappers. I ended up losing my footing over here in these rollers. I slammed the ground pretty good. Knocked the wind out of me and it was kind of hard to get up. But kind of rolled around there for about an eighth of a lap and then things kind of settled down, I just got my breath. I couldn’t believe I didn’t lose any positions, but I just lost a lot of ground on Villopoto obviously. But we recovered the best we could. The second moto I got a good start, worked my way into the lead. From there, however it played out behind me, I just was trying to go as hard as I could. The track was really rough and choppy. We made a change and stiffened the front a little bit for the second moto and it ended up helping. Track was pretty brutal but we were able to find some good line choices and get the overall, which was nice. The last couple weeks we’ve been doing a lot of testing and stuff. I really feel like we made a little improvement.

When you were talking about stiffening the front end was it because the downhill braking type stuff?
Yeah, that was pretty much it. We got a little bit of time on press day here, but the track was really flat. We stiffened the rear going into the first moto. I had to really push the front end coming down the hills, so it was really diving a lot and I was using a lot of energy. It’s nice when you can kind of rest going down the big hills because it’s not diving. Kind of save a little bit of energy and let the bike work a little bit more. 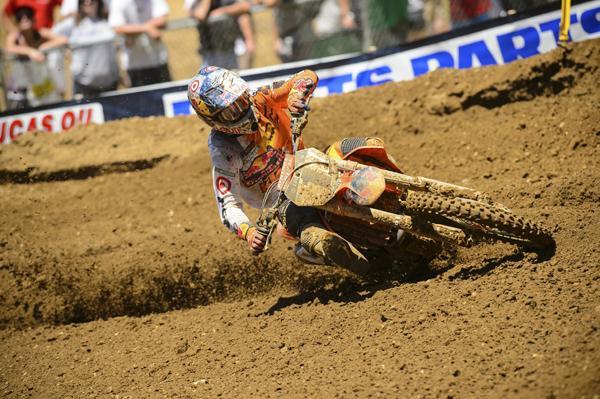 The first moto you were catching Ryan and then it looked like there were 100 lapped riders that you both had to get through. Just take us through those laps.
Yeah, that was pretty crazy. I got right on them and it couldn’t have been six, seven laps into the moto. I came up on a group of five guys… it seemed like you said, 100 riders. It took him a little time to get around. Took me a little bit of time. I felt like I lost all the ground that I made up on him. So I was really trying hard to get back up and that’s when I kind of forced myself and made a little mistake. It’s tough. Sometimes the lappers can work to your advantage and then play against you. Seems like this year it’s been the worst so far. I know nobody means it intentionally. There are two lines. It wasn’t one-lined but it was more of a two-liner, inside or outside. So if you were in one of those lines, you had nowhere to go.

What do you like about this track? You won this three times in the last four years.
I think this is an amazing track. I’ve been fortunate to have good success here. I like the elevation. The off-cambers are pretty tricky. The dirt’s good. It really brings out the best of each rider and it challenges us and makes for good racing. Kind of a little tighter, a little slower in some areas, but then again it’s pretty fast in some others. I like it.

You mentioned bike setup on the hills. How do you test for that because there aren’t any tracks like this that you can test on? I know where you ride in Florida doesn’t have hills like this.
I guess basically you get a good at your base setting where you’re at, which isn’t hilly, but I think the hilliest track you can test at is like Glen Helen. But usually that’s not such a huge change. You’re a little soft. If you can have room to stiffen it up, whether it’s pre-load compression, it’s pretty easy. When it comes to the rear shock kicking, that’s another story, more complicated.

I feel like all weekend long people are like, “What’s Ryan going to do to beat Ryan Villopoto?” Do you think like that or are you just like, I’ve got to worry about my own deal.
Well, I think, Villopoto, obviously he’s that guy beating me. So yeah I do think about it in a sense, but I can’t worry about how I’m going to beat him all the time. I’ve got to focus on myself, on the track and apply myself. It’s tough. It’s like if you had a duplicate of yourself out there, and you were racing him. You can’t ever get that little extra edge. I feel like it’s the beginning of the motos; if he gets a bad start it separates us. And if I get a bad start it sets the tone for the whole moto. Even the first moto [today]. He’s doing everything right, and I’m doing everything right. So I’ve got to ride at 110 percent if he’s riding at 100, which means I’m using a lot more energy and stuff just to catch him. And even if I do that, then I’ve got to pass him and try to win. So it’s tough racing. That bar is so high. 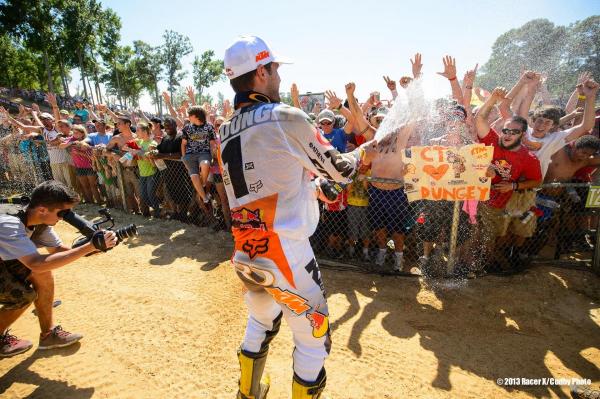 Dungey celebrates his victory with the fans of Budds Creek.
Simon Cudby photo

Compare the pace this year to last year.
Way faster. I think last year was a good year. With Villopoto out, there were some good races, but nowhere do I feel like I ever pushed myself even close to this limit. Last year was a new bike, new outdoor setup. So this year I feel like we’ve been able to make progress. The guys at the team are doing a good job. But there’s more intensity, more guys out there… They’re keeping you on your feet. And you have to push.

What are your thoughts on heading into Southwick?
I’m excited. It’s pretty early in the season that we’re heading there, so it’s a little different. But if this is the last time, try to make the most of it. Southwick’s a good track. The base is a little hard, but it gets rough and it’s a man’s track, so try to prepare for that and see what we can do.

It seems like you, Trey Canard and Ryan Villopoto are all running the heavy 5 o’clock shadow today. Do you have to have some sort of 5 o’clock shadow to podium in the 450 Class?
[Laughs] This is like a seven-day shadow. Maybe a little more. It doesn’t grow that fast!