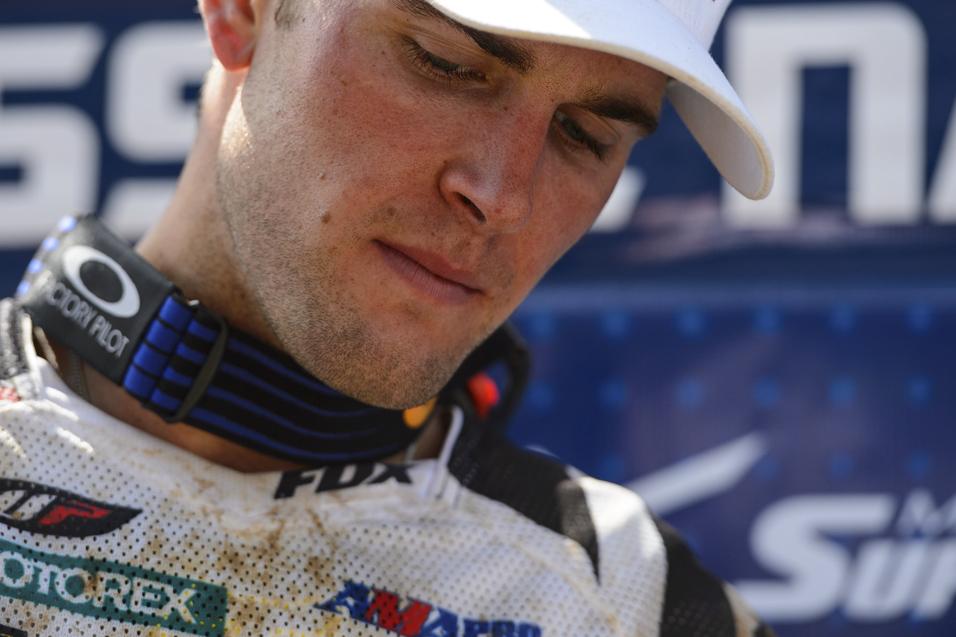 Racer X: Last year, round three, you kicked off a 10-race win streak. What is it about the third round of the outdoors where you’re able to put your program to work?
Ryan Dungey
: I don’t know. I think we were fighting it a little bit at Hangtown, then we did a little bit better in Colorado last weekend. I feel like things are improving. I think everybody’s making a little bit of progress at this point, but I feel like everything’s kind of fallen into this place [for us]. It’s good to get the first win of the season. It was definitely a hard-fought one. The track was tough. The guys didn’t make it easy. So it was nice to get a win. Last year we were able to start kicking off a win streak at this round, but I think this year’s been a little different. There’s a lot of tough guys out there, a lot of tough competition, but I think we can keep the pace going and the consistency to be there every race.

Ryan Villopoto won the first moto and you finished third, did you know the math for the overall in the second moto?
I basically kind of did the math in my head, a 3-1, beats a 1-3. I knew Barcia, if he was in the lead, he’s got the overall, and if Villopoto finished third and I was going to win, with Barcia behind me, then that was good enough for overall. I knew that the pass for the lead was for the overall but I didn’t know where Villopoto was at on the track or anything. He could have caught Barcia. So I was just trying to race the race. 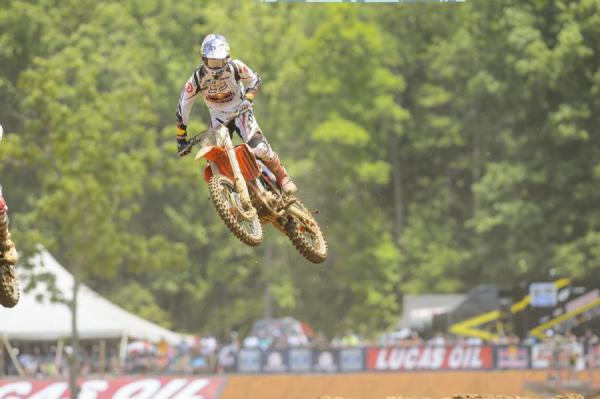 Like a season ago, Dungey captured his first overall of the season at round three.
Simon Cudby photo

Talk about how Barcia is riding.
Barcia is riding good. I think obviously the starts are key. If you can get a clear track from the very beginning you’re going to go. And the first moto, for me, I found myself out of top ten. By the time you get into third place, Barcia and Villopoto, they had ten seconds on me. So that ground is hard to make up, especially in the first moto and everybody’s fresh. This year’s been a little bit different and it feels like the time between motos is very short. That recovery time, you don’t get it. Pushing that hard and then you have to try to recover in that amount of time and eat and everything and go to the podium and stuff like that. So it’s so quick and then you find yourself back on the line. But I feel like each race has gone better and better with that. But being behind Barcia I knew that if I could just...I didn’t want to stay behind him, but I knew that being behind him I hopefully was kind of wearing him down and then I got the five lap to go board and I was like, I’ve got to make the pass. I tried to drop the hammer a little bit more.

That shorter time between your first and second moto, does that really lend itself to you and Ryan Villopoto’s conditioning and experience?
Well, it’s going to be good for the guys who can recover quickly, but I think everyone is going to be going up to that gate in the second moto, you’re still feeling it from the first moto. You feel heavy and stuff like that. Everybody has their own recovery technique. So yeah, the stronger and the more you can recover the better you’re going to be in the second moto. There’s that push in the beginning, but then you see guys that are kind of flat a little bit as the race goes on. But it’s only going to get better and everybody’s going to adapt to it. Today was a pretty hot day so it’s the first really hot, humid race. So that was even tougher.

I have to ask if you’ve ever received a trophy like that before.
No, that was a pretty amazing trophy. I don’t know where I’m going to put it, but definitely cool to see the trophy’s different and new and to get the first place one was pretty cool. It’s good to see.

You’ve been talking quite a bit about working on the bike. And people are like, “Why don’t they just run what they did last year? It was good enough to win the championship.” So just take us through how much things advance from year to year and why you can’t just roll out last year’s bike and just race that all year.
Well, every year you hope to get better. You can see it. The competition’s faster. And last year there were some instances where it wasn’t a lot of top guys. Some of the guys were hurt, unfortunately, and last year’s bike was very good, but I’ll tell you, it wasn’t going to cut it for this year. I got on the bike and I was like, “This ain’t going to work.” We’re going to have to really change things up. And the KTM guys have been doing a good job. And it’s different, too, because you do supercross for the whole half of the year and then you get off onto an outdoor bike and then you seem to want everything more stiff, and then your style changes, the way you ride the bike. But I do feel like everybody is on it this year. It’s way faster than last year’s pace, both motos, and guys are there from the beginning all the way to the end. So we’re going to need a good solid setup. And that takes time. Sometimes you search and search and search and then it just clicks. We struggle sometimes but the tracks, everybody does. It’s so rough and sometimes you just got to go out and put it out of your mind and race. 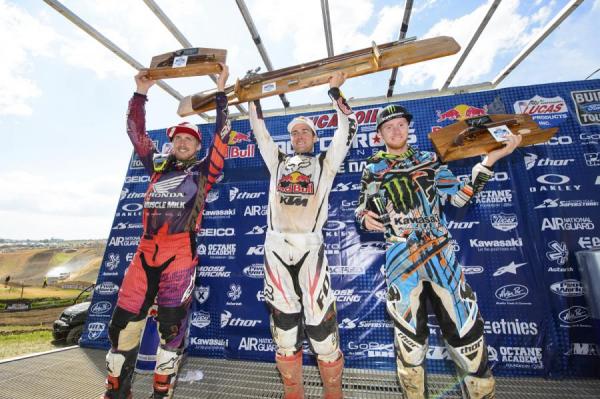 What’s your plan for getting the gun on the airplane?
Actually, I’m lucky to have some people who drove up here to to take it back down for me. I was planning on just carrying it on. No, it’s big. I don’t know. Shipping it’s going to be weird.

This is the new track for everyone, so was there a lot of extra work behind the scenes through practice, making adjustments at settings and stuff or was it fairly normal?
I’ve never been here before so I don’t know what it was like before. I talked to the owner and I guess they did a ton of reimaging and stuff like that. For the first race it was cool to see all the fans. The one thing that caught me off guard was the dirt, just to see how loamy it was in the first practice and then you get down to that hard base. And the ruts just get deeper and deeper. So that was tough. Also it was very harsh and rough, especially that second moto. It’s a man’s track. It’s definitely tighter than normal, which I think kind of physically makes it tougher. Like supercross you’re just always working the bike and you never get that straightaway break. But at the same time I think it was a tough and pretty demanding track. It’s the first year; I don’t know if they’re coming back here next year, but if they get some good feedback from the guys and it will be good.