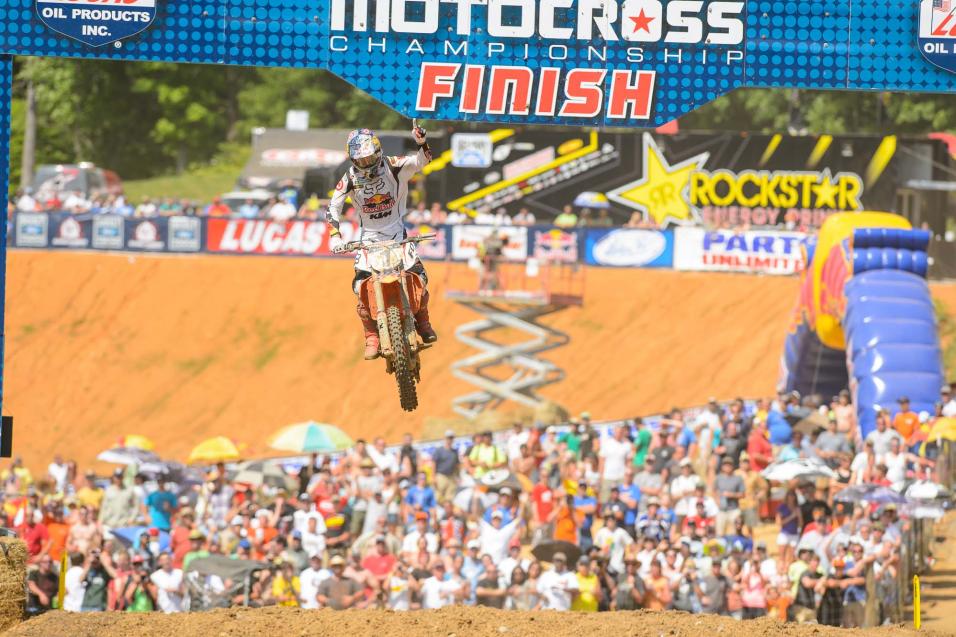 For the first time since 1997 Lucas Oil Pro Motocross returned to a starving Southeast fan base. The Built Ford Tough Tennessee National at Muddy Creek Raceway, just outside Bristol, played host to round three of the series. A massive crowd flooded the lush hillsides at the newly revamped raceway, which brought a new set of challenges along with it.

Through four 450 Class motos Monster Energy Kawasaki’s Ryan Villopoto was a perfect four of four—with little sign of the streak disappearing soon. He had been challenged by the likes of Justin Barcia and Ryan Dungey, but has showed all season that he was the alpha male. But on a humid southern afternoon, Dungey put a halt to the streak with 3-1 moto scores, taking his first overall win of the season.

Jeff Stanton, Justin Barcia’s long-time trainer, has spoken about the rookie having “boy strength” compared to the “man strength” of Villopoto and Dungey. In the first professional moto ever held at the esteemed venue it was Villopoto’s “man strength” versus Barcia’s “boy strength.” Villopoto secured his first Motorcycle-Superstore.com holeshot of the season with Barcia and his teammate Trey Canard following. Defending 450 Class champion Dungey was buried on the start, putting himself in a hole he had a hard time digging out of.

Barcia actually passed Villopoto early, then Villopoto got him right back, leading to a great battle for the lead. Early on, Barcia would hold serve, keeping within a few bike lengths of the leader. But lap six provided the breaking point as Villopoto clipped off a two second advantage, leaving Barcia to battle for second. 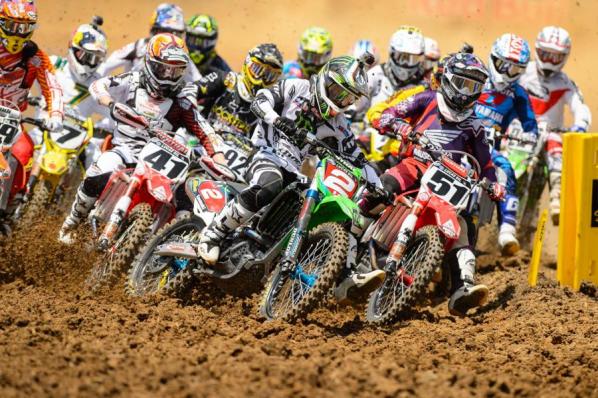 Villopoto started the day with the first 450 Motorcycle-Superstore.com Holeshot, but Barcia (51) quickly passed him to ignite a battle. Villopoto would repass him, and then pull away at the halfway mark. 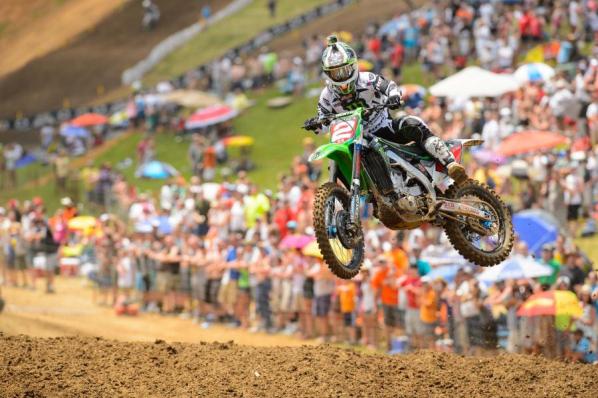 At the halfway mark, Villopoto put the hammer down and left Barcia behind.

Barcia led early again in moto two. Villopoto then crashed while running second, giving the rookie a shot at his first-ever 450 overall win.

While RV was running away with his fifth consecutive moto win, Trey Canard was left picking his way through the pack after he carted huge in the straight away before the finish line. Canard was down for a few moments and then would have to go to the pits for repairs. He would remount and finish 29th.

Dungey methodically dug himself out of an early hole, putting moves on Mike Alessi and then James Stewart to finish third. Clement Desalle made a furious late charge to take fifth with Alessi, Josh Grant—who had to recover from a bad start—Phil Nicoletti, Ryan Sipes and Justin Brayton rounding out the top ten.

Villopoto, seeking his sixth consecutive moto win, was joined at the hip with Dungey and Barcia in the second moto, but his win streak was put in jeopardy following an early crash that sent him stumbling back to 16th. With Villopoto buried, it left Barcia and Dungey to duke it out for the overall. Dungey was strategic early, hanging near and waiting for a mistake. When that mistake never came, Dungey, feeling the pressure, dug down and made a pass stick late in the race. Dungey would cruise from there, holding off Barcia for the win and ending Villopoto’s win streak at five motos.

Meanwhile Villopoto was working his way through the pack at a rapid pace, eventually getting to third before another crash set him back to fifth. RV then charged again, tracking Alessi down for fourth and pushing Canard to the final corner for third. Alessi, Stewart, Kevin Strijbos, Jake Weimer, Desalle and Andrew Short would round off the top ten. 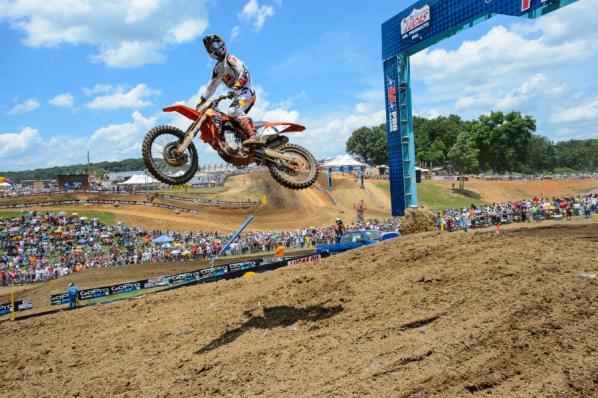 In moto two, Dungey had to work past Barcia to take the lead. From there, he was able to nothc the overall via 3-1 scores.

Villopoto raged back from 16th to fourth, but then crashed again to drop to fifth. He would regain fourth by the finish. 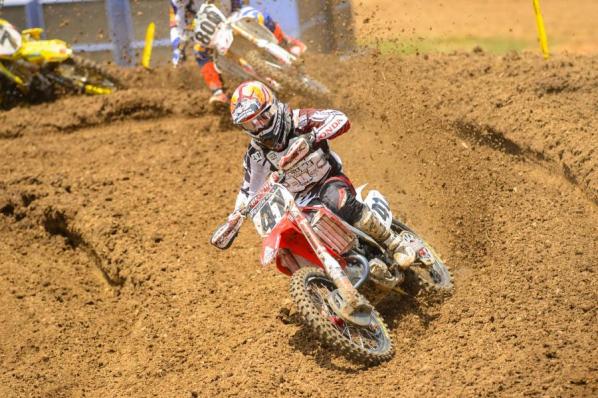 Canard bounced back from a hard crash in moto one to card third in moto two.

The 250 Class offered up another intense day of racing, with a third overall winner in as many rounds emerging. Marvin Musquin secured his second overall win in his American motocross career at the inaugural Tennessee National, and like Unadilla a season ago, the site of his first win, the Frenchman did it without winning a moto.

Musquin’s Red Bull KTM teammate was on fire early in the day, blistering the field in practice but he failed to grab the Motorcyle-Superstore.com holeshot in moto one. That honor belonged to GEICO Honda’s Justin Bogle, who is beginning to return to form after missing all of Monster Energy Supercross with injury. Bogle was joined up front by teammate Zach Osborne, who briefly took the lead before being re-passed by Bogle, and MyPlash/Star Racing Yamaha rookie hotshot Cooper Webb. But Bogle was unable to hold the lead, crashing before making it through the first lap. The lead was inherited by Webb—the first time the rookie has lead in Lucas Oil Pro Motocross—and he held the lead for the first few laps.

But Webb soon received heavy pressure from points leader Ken Roczen, who made quick work of the rookie. Webb’s work was not done as he still had the likes of Musquin, Blake Baggett, Zach Osborne, Jason Anderson and Eli Tomac to deal with. The young gun held off the barrage of Osborne and Anderson, but succumbed to the pressure of Baggett and Tomac.

With the battle ahead dispersing, and the mid-pack charge of Osborne fading after a late crash, Roczen cruised to his fourth moto win on the young season. Musquin would take second with Baggett, Tomac, Webb, Osborne, Anderson, Kyle Cunningham, Cole Seely and Joey Savatgy closing out the top ten. 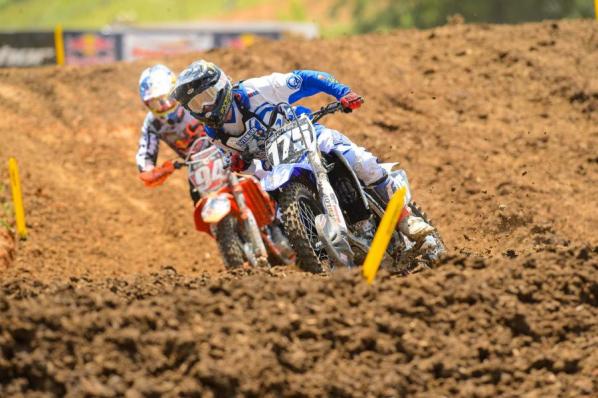 In moto one, Cooper Webb  made his way around GEICO Honda men Zach Osborne and Justin Bogle to take the lead on his MyPlash/Star Yamaha. 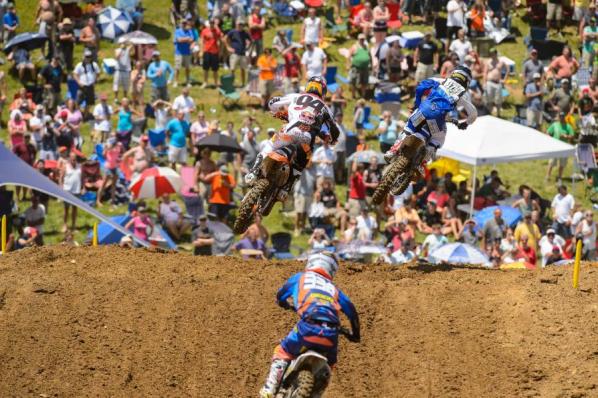 But Ken Roczen (94) was just too much, eventually getting around the rookie for the lead.
Cudby photos

Just like last week at the Rockwell Watches Thunder Valley National, the second moto belonged to Eli Tomac. The GEICO Honda rider used an open track after grabbing the Motorcyle-Superstore.com holeshot and crushed the field to the tune of seventeen seconds over Musquin.

With Tomac out of sight attention quickly turned to Roczen, who was dealing with a second consecutive bad start. Roczen pushed past the GEICO Honda duo of Osborne and Bogle and was looking to make a charge at Baggett who had made his way past earlier.

Roczen quickly moved to the rear fender of Baggett, and using some creative inside—and outside—lines, got past the defending champion. The overall was Roczen’s to lose at that point and a late mistake did exactly that. With Baggett still on his heels, Roczen was dealing with traffic on the downhill after The Bomber triple jump, and was unable to take the line he had been using. This threw him off just enough to send off the track, losing his position to Baggett, and the overall in the process.

The GEICO duo of Osborne and Bogle finished fifth and sixth, respectively, in the moto, with Anderson, Martin Davalos, Blake Wharton and Jeremy Martin rounding out the top ten. 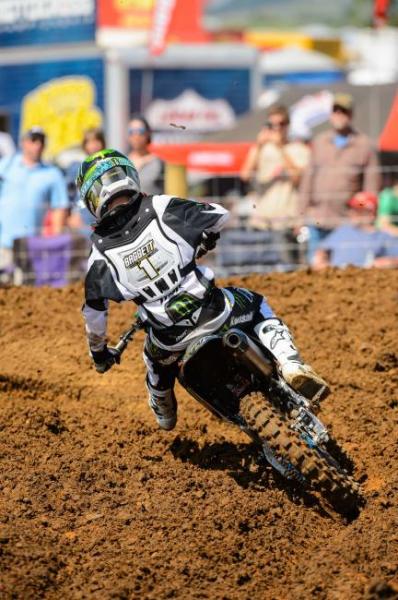 Blake Baggett's third in moto two prevented Roczen from getting the overall win. 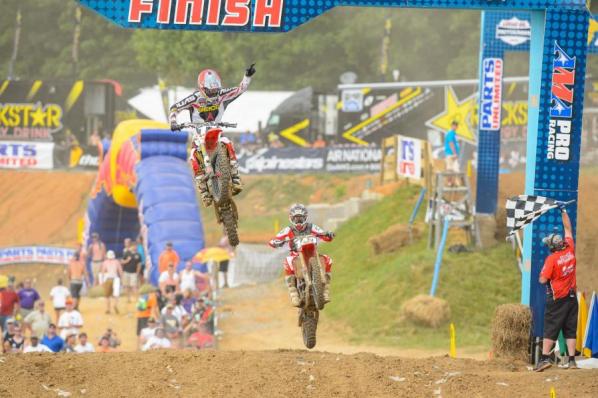 And while Tomac dominated the second moto, his fourth from moto one prevented him from grabbing the win, too. 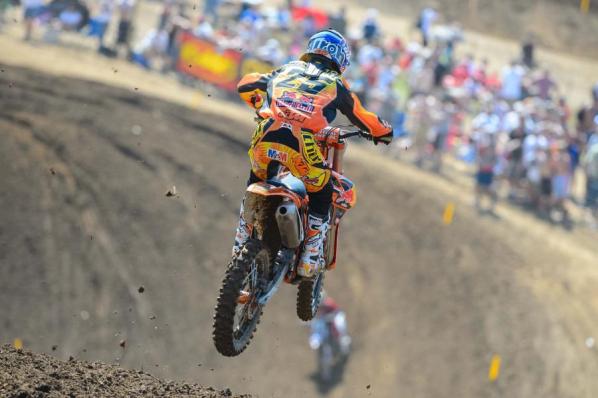 It all led Marvin Musquin to the overall victory via 2-2 scores.
Cudby Photos 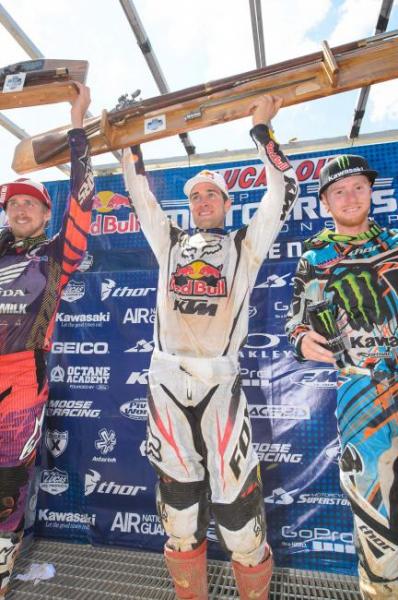