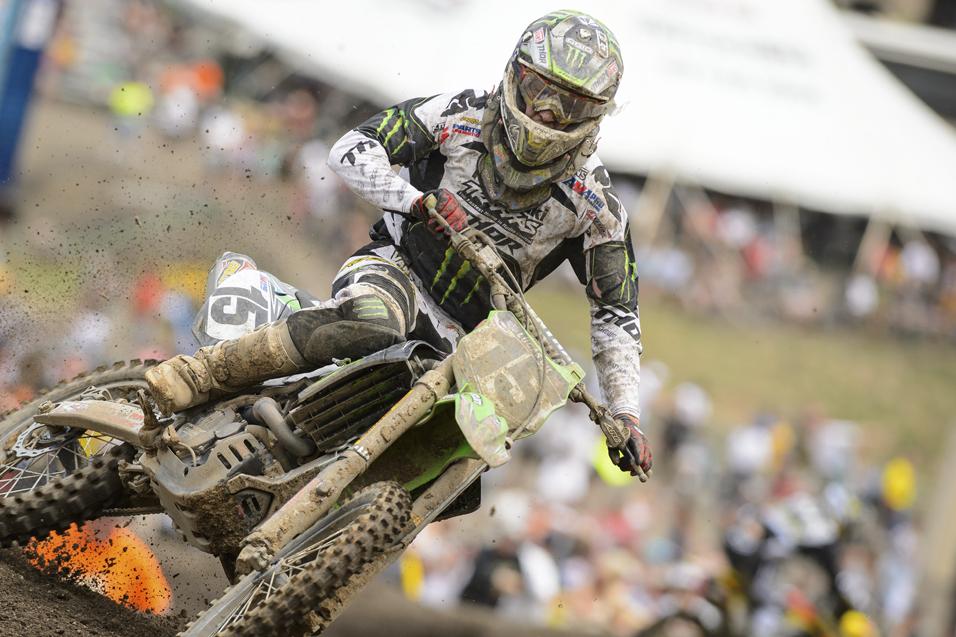 - A lingering leg injury from a second moto crash at Hangtown forced Monster Energy/Pro Circuit Kawasaki’s Darryn Durham to the sidelines during the Lakewood motos. Durham tried to go in the morning practice and qualifying sessions, but said he couldn’t grip the bike with his legs, due to bruising and stitches. Durham is expected to return this weekend at the Built Ford Tough Tennessee National at Muddy Creek. In the one moto he completed this year, he finished a solid sixth.

- In more news on the injury front, it looks like an elbow injury suffered in supercross could keep Lucas Oil/Troy Lee Designs Honda rider Jessy Nelson out of action indefinitely. “It’s tough to go racing without him but the smart thing to do is get him 100 percent healthy,” said team manager Tyler Keefe in a recent team press release.

- The MyPlash/Star Racing Yamaha stable of rookies impressed for a second consecutive week. Cooper Webb locked down his first career podium—in only his second career race—in the first moto. Not wanting to be outdone, Jeremy Martin snagged the Motorcylce-Superstore.com holeshot in moto two, before falling back to sixth in the moto. As the series travels east, it could hold an advantage for the North Carolina (Webb) and Minnesota (Martin, who also trains in Florida) natives. 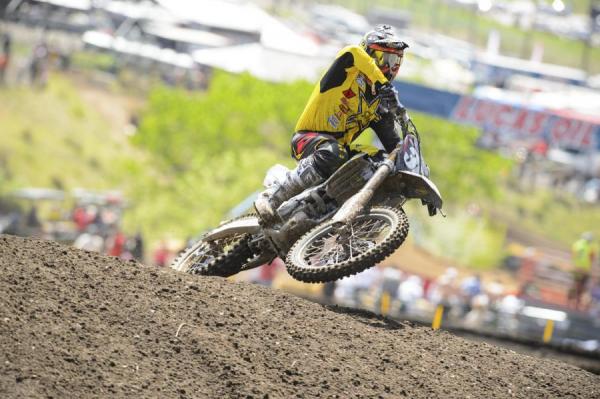 - Following surgery to repair a torn ACL, Rockstar Energy Racing veteran Nico Izzi struggled in his return to action at Hangtown—about eight months removed from the injury. Thunder Valley proved a much better gauge of where Izzi is in his recovery, as he challenged for a top ten in the first moto en route to thirteenth overall. Things should only improve from here as Izzi’s knee continues to grow stronger.

- GEICO Honda’s Justin Bogle had a thirteenth in the first moto, but he rode much better than the result shows. On the starting line, Bogle didn’t have the Hats Off device installed in his helmet (this is a small inflatable pack which makes it safer for medics to remove a helmet after a crash) and you can’t race without it—so he had to remove his helmet and install it at the last second. The gate dropped without him. From last, he tangled with privateer Travis Bright early, crossing the first lap in 37th, before charging to the front for a top 15 finish. A second moto seventh helped Bogle salvage a top ten overall finish on the day. Let’s also give Bogle credit for pulling Bright’s bike, which was dumping gas and wheel spinning, off the downed rider after their crash.

- ROOKIE WATCH #1: We mentioned the good days from the MyPlash/Star Racing Yamaha duo, but the same could not be said for others. GEICO Honda rookie Zach Bell missed round two due to a shoulder injury suffered in supercross. His status for the rest of the series is still in question. FMF/Orange Brigade’s Joey Savatgy was headed toward a top ten in the second moto before his bike let go. Savatgy finished the moto 35th.

- ROOKIE WATCH #2: Consistent day from Monster Energy/Pro Circuit Kawasaki’s Justin Hill (12-12 for 12th overall). And another solid weekend for 250 privateer Dillan Epstein, who went 15-15 for (guess what?) 15th in the 250 Class. That’s two weeks in a row that the California native has been the top placing true privateer in the class.

- Lucas Oil/Troy Lee Designs Honda fill-in rider Malcolm Stewart, with little time on the bike after signing late, picked up his first career 450 top ten in the first moto with a ninth. Stewart would finish just outside the top ten overall in eleventh. 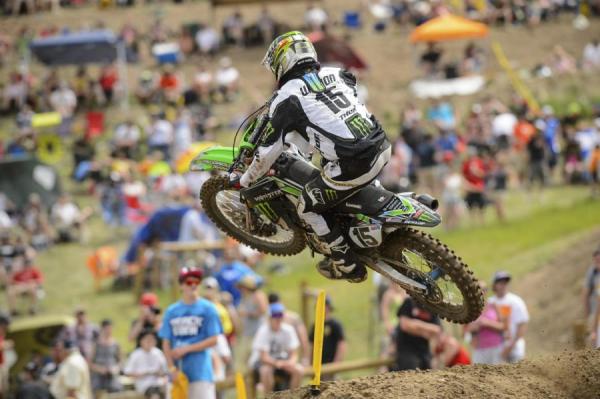 - Unless a last minute deal is struck, Thunder Valley will mark the last races of Lucas Oil Pro Motocross—until the series heads back west to Washougal in late July—for privateer Weston Peick. Peick finished thirteenth overall at Thunder Valley and sits an impressive ninth in 450 points.

- Privateer Derek Anderson, who recently released his new web-series Man vs. Moto, was back in his home state of Colorado. While other home state icons like Eli Tomac and Andrew Short garnered the spotlight, Anderson rode to a solid 19th overall, one position behind Short.

- But wait, why was Short only 18th? A big crash off the start of moto one left him with a sore groin. He soldiered on through the rest of the day.

- Rookie privateer Tyler Bereman made his first career 450MX main at Thunder Valley. The SoCal native, who contested the 250SX West Region in supercross, finished 29th overall on the day.

- Certainly a rough start to the year for the JGR Toyota Yamaha team. Justin Brayton crashed early in both motos, and in moto one the crash damaged his kill switch, sending him to the pits for repairs. He finished 31st there, and then went from 33rd to 20th in moto two. Josh Grant was a solid eighth in moto one, but troubles off his own early in moto two held him to 18th, enough for 12th overall. 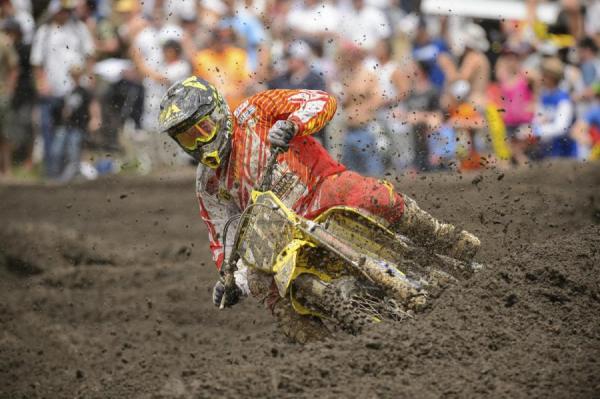 Unless he can put something together, Peick won't be heading east.
Simon Cudby photo

- Rockstar Energy Racing’s Jason Anderson is knocking on the door of his first career 250MX podium. He was battling in podium position early in the first 250 moto, and would finish fifth. In moto two, he rallied from way, way back, from 38th on lap one to 12th. This could be considered the home race for the New Mexico-born Anderson, but then the Las Vegas, Phoenix and Salt Lake City supercrosses could be, also, as could the Utah National in Salt Lake coming later this year. New Mexico’s Ivan Tedesco always did well in Thunder Valley, if this means anything.

- By the way, the Rockstar team switched to black plastic on their Suzukis this weekend and plan to keep it that way all year. They didn’t have the look ready in time for Hangtown but what you saw in Thunder Valley is the official 2013 outdoor livery.

- Did you know the oversized gas tanks on the factory Honda bikes (Canard, Barcia and Dungey) are made of titanium? That’s just bad ass.

- We fully admit we know nothing about Jacob Baumert, and he went 19-19 in the 250 Class. Seriously, we’ve got facts and figures on just about everyone else in the Thunder Valley top 40 except him. We’re on the lookout now….