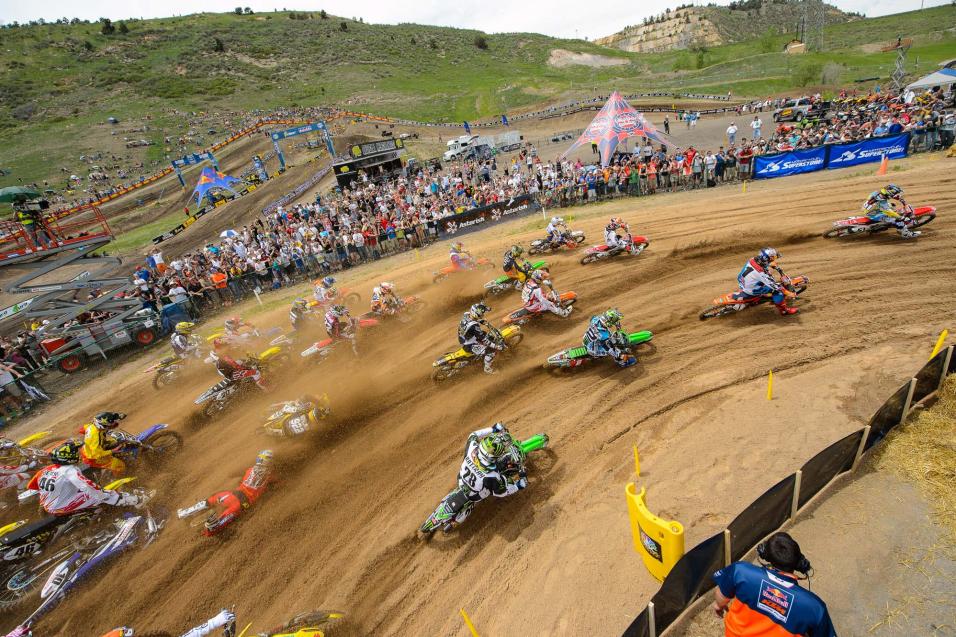 The track was rough at Thunder Valley. The riders commented that there was much more sand than usual, and that led to some huge breaking bumps. Most of the passes, it seemed, happened heading into corners thanks to those bumps. The riders did get some relief from the weather, which was in the 80s all day. It has been much hotter in the past at this race.

Ryan Villopto wins again—but it wasn’t quite as dominant as Hangtown. Close, though. Justin Barcia led some laps in both motos, Ryan Dungey was a little closer down the stretch in second place each time compared to last week. But the scary part is that when Villopoto visibly turned it up he made passes quickly. In the first moto, he passed Barcia and Dungey on the same lap. It's hard to say if Villopoto has really shown all the speed he could potentially have, since he seemed able to drop the hammer at key times and do damage. But did admit he had a few close calls, and he went off the track a few times. But each time he was able to make the ground back up. Villopoto has won a lot of races in his career, but this is the best he’s even ridden. 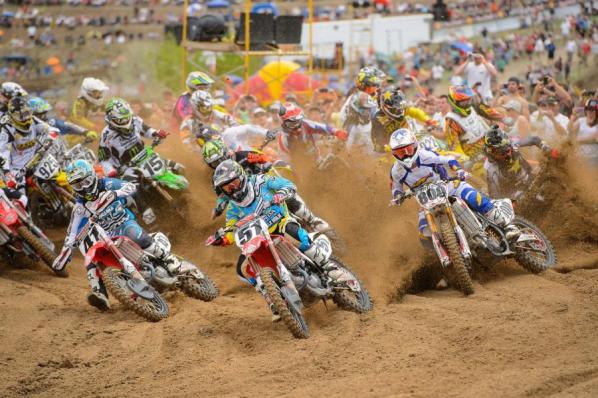 After getting a pair of bad starts at Hangtown, Barcia (51) had them dialed here.
Cudby photo

Dungey won’t give up, though. After the race, Villopoto said he knows Dungey is the kind of guy who will charge hard to the end of every moto. At one point, he got RV’s nine-second lead in moto two down to six seconds. So RV kept pushing, but Dungey kept him closer than at Hangtown. Dungey said his team made big progress on the bike during the day, and he said they made more progress in the second moto.

Barcia said his starts really held him back at Hangtown, and he was hoping to get better ones here. He did, nailing two holeshots. “I learned so much riding up front with those guys,” he said after the race. “The competition here is gnarly. Just got to keep working hard.”

Another solid, consistent day for Trey Canard, who scored 4-5 finishes. In the second moto, Barcia and Canard started 1-2, but were eventually overhauled by the veteran riders with 450 Class titles to their name, Villopoto, Dungey and Stewart. Still, the young Honda Muscle Milk squad is building a solid base to their season.

Well done by the Rockstar Suzuki guys from the GPs. Clement Desalle was battling for top fives in both 450 motos, and Kevin Strijbos was top ten both times despite going down in the first turn of the first moto. The team pitted with the Rockstar Energy Racing squad, and their bikes were basically versions of Ryan Sipes’ RM-Z450 with different suspension and tires. They’ll be back to race in Tennessee next weekend. 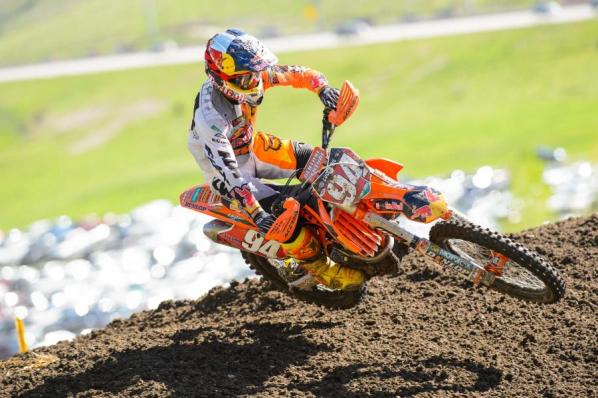 Ken Roczen just wasn't as sharp in the second moto, and his three-moto win streak is history. 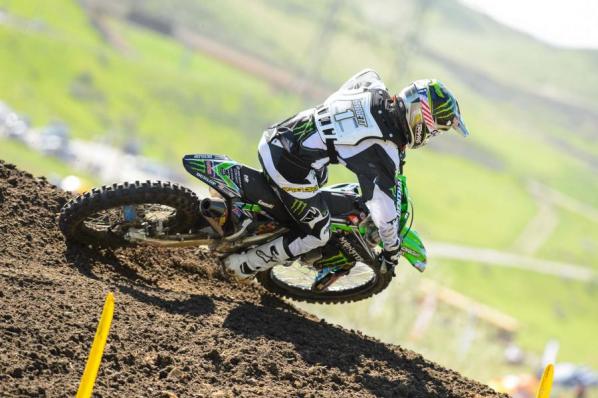 Not as good for Blake Baggett here as it was at Hangtown. "One of the worst days I've had," said Baggett after the race. He salvaged fifth overall.
Cudby photos

James Stewart and the Yoshimura Suzuki team, like Dungey, made big progress during the week. Team Manager Mike Webb says the team worked on the stability of the bike during the week, and they had a steering damper on the bike as proof. Stewart couldn’t show what he had, though, because Jake Weimer crashed in front of him in moto one and Stewart went down with him. It took nearly the whole moto for Weimer and Stewart to even get into the top twenty. In moto two, things were better and he finished third. He and Dungey still have some work to do to get onto Villopoto’s pace for the whole moto, though.

What was different about Eli Tomac this weekend? Was it the bike? His familiarity with elevation? “Not really, I think you just have those days were you’re on,” he said. And as far as Tomac’s home track advantage, he lives nearly eight hours from the track and even flew in just like he would any other round. “I rode here a few times for Loretta’s qualifiers, maybe once every few years.”

But it seemed like something sapped Ken Roczen in the second 250 moto—he just didn’t have the same aggressiveness as he did in the first three motos this year. Roczen said he didn’t feel extra winded at the end, but he knows with how much slower his bike felt, the elevation must have had some impact on him physically, too. He just said he didn’t feel on in the second  moto.

Zach Osborne sure did, hounding Roczen the whole way to steal second. Here’s Osborne’s first four motos this year: he was just inside the top ten in the first moto of the year, where he said he was super nervous. He overcame crashes in the next two motos to score fifth and sixth, then took this second. What we’re saying is that Osborne has been consistently fast so far, and is rapidly establishing himself as a contender. “Spending a few years in Europe will change a person,” said Osborne, who had never even come close to the podium in his brief stints trying in American motocross. 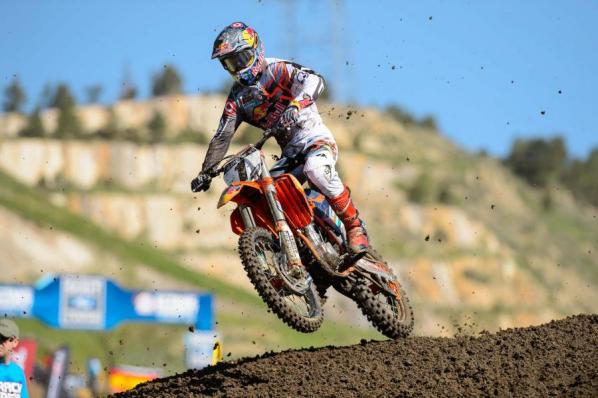 Dungey was better than he was at Hangtown. 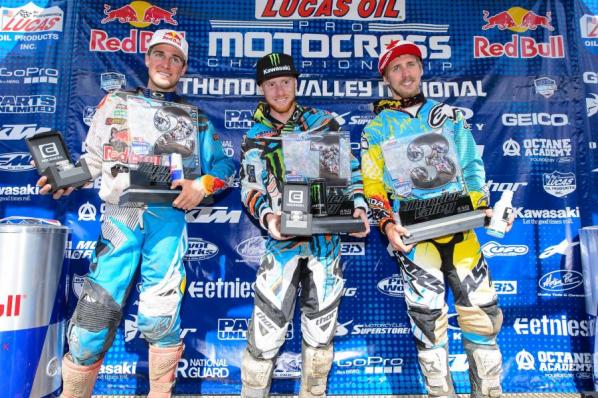 We’ve seen rookies come in and kill it in their first pro races. But now Cooper Webb has backed it up, finishing third with a brilliant ride in the first moto. His pass on Marvin Musquin to get that spot was super slick. Just like Hangtown, he wasn’t quite as strong in the second moto, but still had a shot at the top ten when he crashed on the final lap, knocking him back to 17th.  His teammate Jeremy Martin, also a rookie, pulled the holeshot in moto two and finished a solid sixth, as well as sixth overall with 8-6 scores. Things are looking up for the MyPlash/Star Racing Yamaha team.

Another rookie who should have had a good finish was FMF/Orange Brigade KTM’s Joey Savatgy, who was running ninth in the second moto when his bike let go. Savatgy went 16-35. Justin Hill was consistent all day with 12-11 scores for 12th.

Justin Bogle was left stranded on the starting line of moto one when it was found that he didn’t have his Eject helmet removal device installed, which is required. He was rebuckling his helmet as the moto began, but climbed back to 13th. In moto two he was seventh.

Darryn Durham was unable to race due to the lingering effects of a big mid-air crash with Blake Wharton last week. He has stitches in his leg, and found he couldn’t grip the bike with his legs after trying in practice. He says he should be ready to go next weekend.

Blake Baggett had a forgettable day. He says he crashed early in the first moto then went off the track three times, finishing ninth. In moto two he finished fifth, somehow getting fifth overall with 9-5 scores. Baggett is already nearly a full moto down on points from Roczen, though. 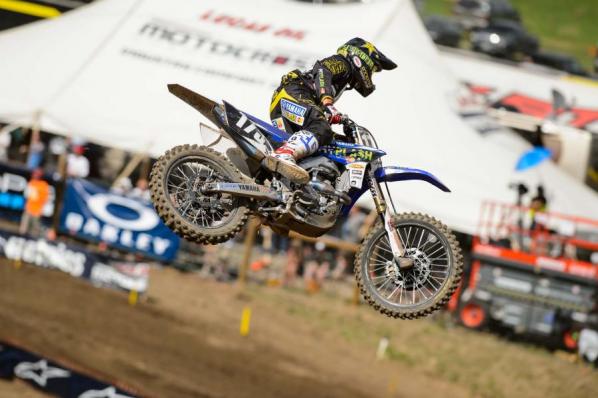 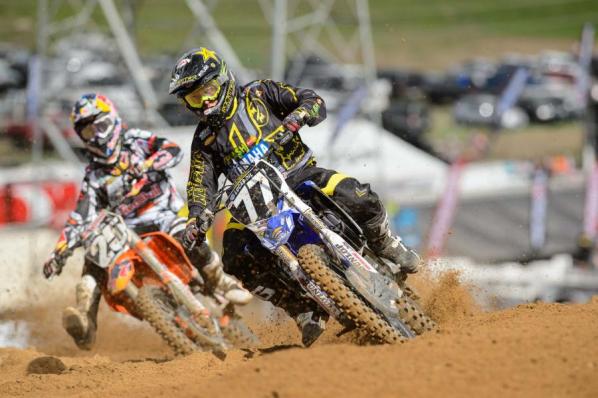 But don't let that overshadow his rookie teammate Jeremy Martin, who was a solid sixth overall. 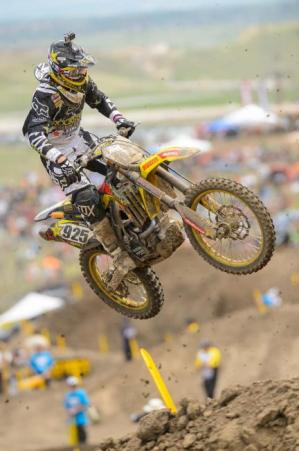 Clement Desalle just missed the top five overall, but he was impressive. Expect him to be even better next weekend in Tennessee.
Cudby photos