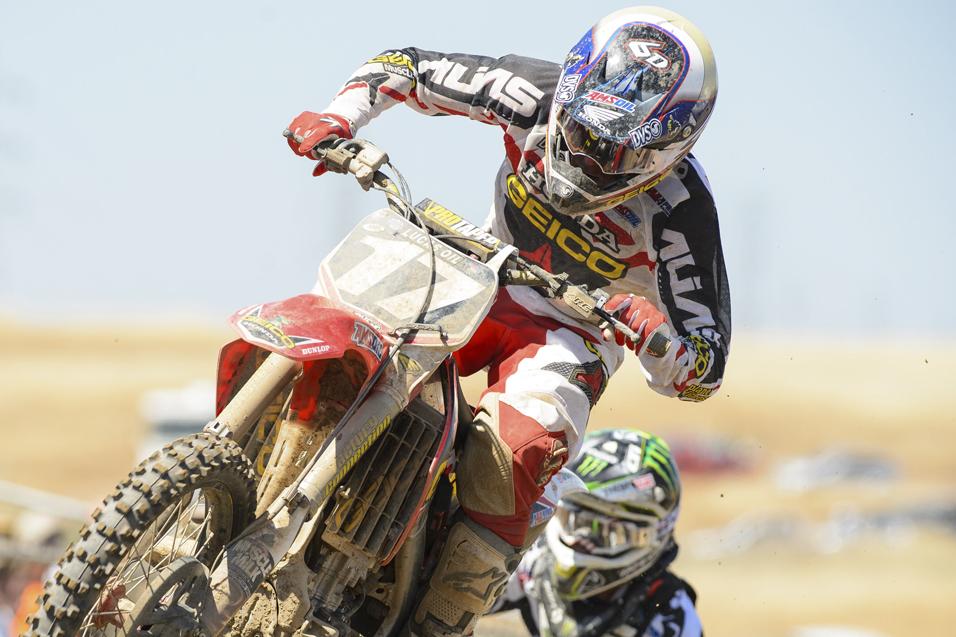 - Ryan Villopoto not only set the fastest lap of the race with a 1:59.603, he was the only rider to drop below the two-minute mark en route to a dominating round one performance.

- Last year James Stewart returned to Lucas Oil Pro Motocross with a 1-1 performance at Hangtown. This year, Stewart talked about preserving himself for the entire season. Although he led early, his fastest lap was nearly three seconds off RV's, and nearly two seconds slower than Dungey's.

- For the first time in his career, James raced against his younger brother Malcolm, who made his 450 debut at Hangtown. The younger Stewart was on rails early, before eventually succumbing to a mechanical, setting the sixth fastest lap in moto one.

- Canard's teammate, Justin Barcia, who is beginning his first full 450 MX season, overcame a bad start to finish fifth. Barcia helped matters by setting laps in the 2:03-2:05 range during laps 2-12.

- While a late stall cost 450 rookie Dean Wilson a chance for a top-ten finish, the 2011 250MX Champion did settle in nicely in his first race—considering his lack of prep time due to injuries suffered in supercross. The Monster Energy/Pro Circuit Kawasaki backed rider set laps in the 2:04-2:06 range during laps 3-9.

- Villopoto set the fastest lap of the moto by just barley sneaking under the 2:02 mark, with a 2:01.999. Note that this is two and a half seconds slower than his first moto fast time. Tracks get rougher as the day goes on in motocross.

- Jake Weimer went down in a big pileup early on and was way back, and he didn’t even score points due to a 24th place finish. But check out his lap time—fifth fastest of anyone while running in traffic.

- Ryan Sipes, who took over for the injured Davi Millsaps in the 450 Class for Rockstar Energy Racing, impressed in his 2013 450 debut. Sipes showed a mixture of speed and consistency, setting all his laps (excluding laps 15 and 17) under the 2:10 mark.

- It seems like we mention this every year, and at every round he races, but Weston Peick put in ANOTHER very underrated performance at Hangtown. While his lap times slid from his early 2:07-2:08 pace, he was still in the 2:09-2:10 range in four of his final five laps. 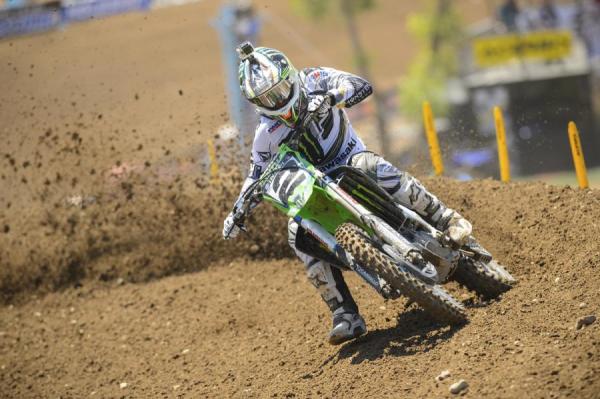 - Ken Roczen rolled to his first overall motocross win in the U.S. on Saturday, but he didn't make it easy on himself in the first moto. Roczen had to slice his way through the likes of Tomac, Baggett and Musquin—all title contenders—to grab the moto win. During that time, he set the fastest lap of the moto with a 2:02.818, which would have put him fifth best in the 450 Class.

- Blake Baggett's patented late moto charge never came to fruition in moto one—mainly due to a nagging wrist injury in which he only has 10 percent movement. With that said, he was matching Roczen step for step late. Check out a side-by-side comparison below.

- Consistency’s the game, Eli Tomac's the name. The GEICO Honda pilot had only one lap over the 2:06 mark—his last lap.

- The other star rookie under the MyPlash/Star Yamaha tent, Jeremy Martin, whose prowess coming out of the amateur ranks was his endurance, was strong late in the race. Four of his last five laps were on pace or better than his 2:06.637 average.

- While his status for the opener was still in question in the weeks leading up to Hangtown, Darryn Durham returned with a flurry—finishing sixth in the first moto. Many were skeptical if his nagging shoulder injury would hold up, but if his lap times are any indicator it did—as Durham's average lap time was a 2:06.504, with his late times in the 2:05-2:07 range.

- While he was probably not pleased after giving away his lead in the first moto, Marvin Musquin came back in the second moto, after getting tangled with Zach Osborne, to lay down some very consistent laps in the 2:07-2:09 range.

- The aforementioned Osborne also made a late charge to fifth. He helped his own case by setting laps in the 2:08-2:09 range.

- Monster Energy/Pro Circuit Kawasaki rookie Justin Hill overcame bad starts in both motos to piece together a solid pro debut. Hill was very consistent in the second moto with only two laps over the 2:10 mark.

- Jason Anderson, who spent time atop the leaderboard in practice, was much better in the second moto, running inside the top-five for the majority of that race. Although his lap times did dip into the 2:11-2:12 range late, his average of 2:09.907 was near the leaders. 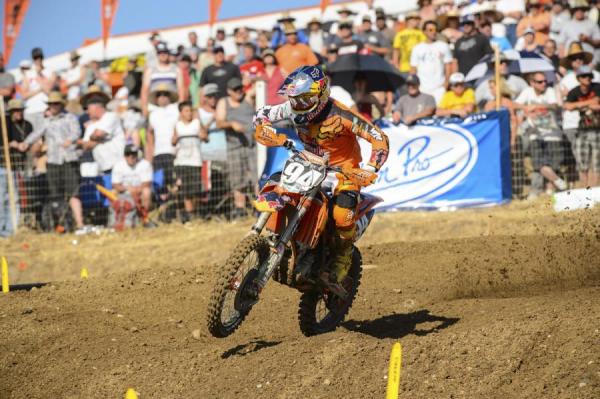 Ken Roczen was the fastest in the 250 Class.
Simon Cudby photo

- Arguably he most shocking story of the weekend was Rock River Yamaha’s Courtney Duncan dominating pre-season favorite Jessica Patterson and the rest of the field. Duncan wowed the crowd on her YZ125, with her fastest lap two seconds clear of second in the first moto, and nearly four seconds better in the second moto.

- Patterson bounced back from a DNF in the first moto to capture second, but her average lap was two seconds slower than Duncan’s.

- T-bug Higgins was also a major surprise in WMX. Higgins set the third fastest lap in the second moto.