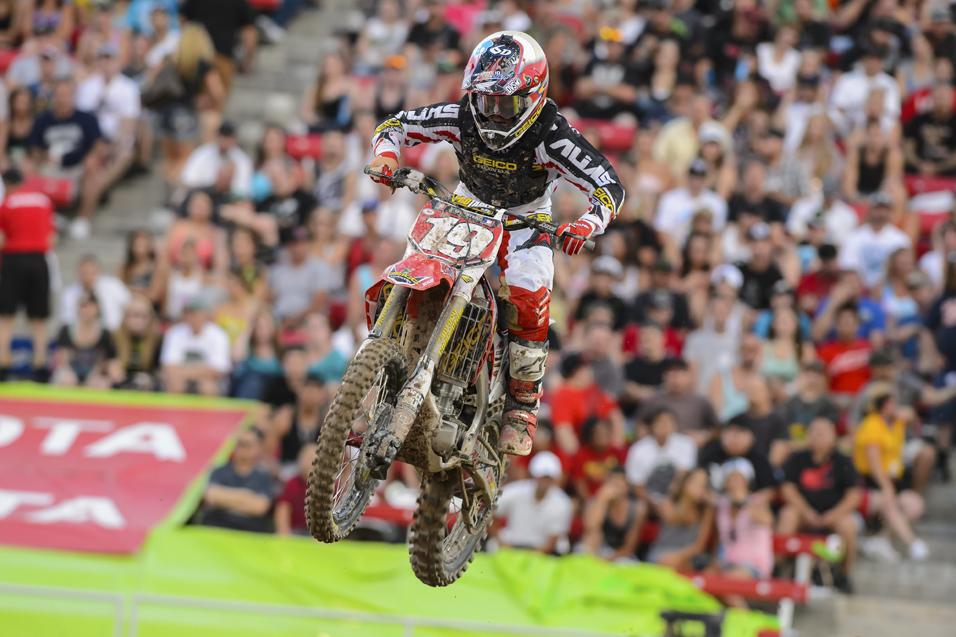 While most champions would be out celebrating titles and talking long into the night about their accomplishments, GEICO Honda’s Wil Hahn was nowhere to be seen post-race in Las Vegas. He broke his hand in a practice crash earlier in the day, and was getting the same hand that held a number-one plate set for a cast. He followed that with surgery a few days later, and will be out of action until the Budds Creek round of Lucas Oil Pro Motocross. We finally tracked down the new 250 West SX Champion for a Monday Conversation that’s one week overdue.

Racer X: I would imagine the party has been raging for a good week now?
Wil Hahn: Yeah it’s been going pretty good and I don’t think there’s an end in sight yet.

Are you really even hurt or do you just figure with all of this celebrating you won’t be able to race?
Exactly, I just know I’ll be too hungover from Las Vegas to go at Hangtown.

I would like to ask what it’s like to go into the final race with a title on the line, but instead, I have to ask what it’s like to go into the last race with a title on the line and also get hurt two hours before the race. What was running through your mind?
Man, I can tell you about so many emotions. It was a catch-22 that day. At a lot of rounds, I rode really defensive, I was thinking about points and the points lead, I wasn’t riding as well as I could have. I finally felt all of that was out of my system coming into Las Vegas. I felt like I couldn’t be touched in the first practice, and I felt like that in the second practice, even though I wasn’t on top of the board, I just felt so good on the bike, like I could do anything I needed to do. But then I crashed 50 feet from the finish! All I could think about was getting up, but I knew my hand was bad right away. I knew it was going to be hard and tough, but I knew all I had to do was deal with 15 minutes of pain and suffering. Just 15 minutes. Back at the truck, though, I didn’t really know if I could do it. Luckily, the Asterisk guys and Doctor G, taped it up and went for it. I really wanted to beat Marvin [Musquin] in that race, I wanted to go out with a win, but late in the race, it was pretty much all I had.

So you weren’t riding just for points? The hand is what really held you back?
Absolutely. A lot of people were like, “Oh he just let Marvin by and let the points fall his way.” I didn’t want to do that, I wanted to win. But I just could barely hold on at that point. That was the 15 minutes of pain, which was all I had in me. 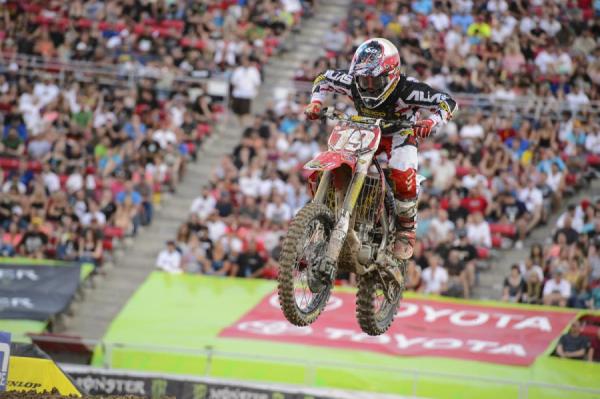 Wil Hahn fought through the pain of a broken hand to capture his first 250SX title.
Simon Cudby photo

Would you have even raced if a title weren’t on the line?
Tough to say. I’d like to think I would have still raced, but that’s a hard decision, because riding with a broken hand, it’s easy for your hand to come off the handlebars and then you’re really vulnerable to an even bigger crash. Most of the race, I had to ride making sure that didn’t happen.

Moving away from the injury, looking back now, do you feel like you handled the pressure pretty well? Did the day seem normal?
Everything seemed really normal to me. I feel like I handled it pretty well all day, which is good considering it was the first time I’ve ever been in that situation. I think it helped that Marvin and I had great respect for each other the whole series, and all you can do is give it your best. I was at the point in my career where I had to get things back on track and win races, and I had already done that, so I think that helped me deal with the pressure better, I had already accomplished some good things.

It seemed like you had prepared yourself for that all year. Even pre-season, you never shied away from talking title, about how this was your last best chance, things like that. You just hit it head on.
It’s like I said earlier in the year, if a guy sits there and tells you he’s not thinking about the title at all, he’s crazy. This is what we all dream of doing when we are eight years old. You want to be in this position, so you need to enjoy every minute of it. In the past, I’ve taken things for granted, and I’ve had some tough years. So I wanted to enjoy being in this position.

So when it was over, what happened? You’ve won the title but now you have an injury!
Yeah it was weird! I was excited, but I’m also like, ‘Now I have a broken hand, so I’m going to miss Hangtown.’ And that’s a bummer because I thought I would have some real momentum going into the outdoors. So that was kind of hard. And, also, I wouldn’t be able to run the number one plate in the shootout. That’s too bad, because I won’t be able to defend this title next year, so the shootout would have been my only chance to run a number-one plate. But, this was the best decision I could make. I got it checked out on Tuesday, had surgery on Wednesday and was back in my bed that night. Now all I can do is focus as hard as I can on therapy. 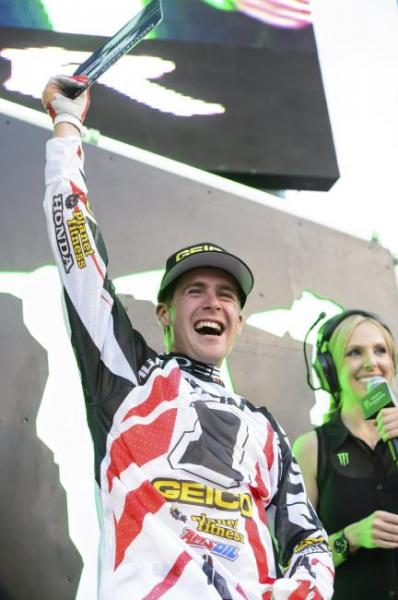 Yes the rules force you to the 450 class next year, right?
Yes.

Did you know that all along?
I did. That’s okay, though, because I knew the only way I would get bumped is if I won the title so you can’t really complain about that! If I got second for the year, I would get to stay another year. For me, it’s awesome because I have a great team behind me with GEICO Honda and I think they’re going to stick with me.

So the team has already said you’re set for a 450 next year?
It’s a little early, nothing has been signed, so it’s a little bit premature to say that, but I think it’s pretty mutual that I want to stay and they want to keep me.

Did you see how close it was on the last lap?
I did. With two laps to go, the gap was pretty good. Tyler [Bowers] was riding a great race. But I knew Marvin was going to give it everything he had, and I saw how close it was getting, and I was like, ‘Hey, I gave it everything I had. There’s nothing I can do now.’ I’m pumped it worked out the way it did! 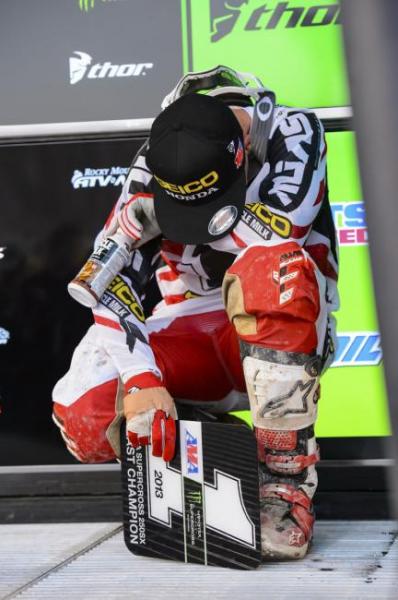 Hahn was overcome with emotions after his win.
Simon Cudby photo

What did you say to Bowers after the finish?
I said, ‘Hey, what kind of beer do you like because tonight it’s on me!’ That may sound inappropriate to say, but the way the whole night worked out, this year, the last couple of years, for me, I don’t think I’ve ever felt that way in my entire life.

Finally, they brought in your brother Tommy to hand out the championship to you at the Awards Ceremony. Did you know that was coming?
I had no idea! He was even sitting at my table, and then just before my time comes, he leaves! I was wondering what was going on, I couldn’t believe he was going to miss this. That was one of the coolest moments ever. We got emotional up there, too, we’ve both been through a lot. My whole family—my parents made this possible for me by sacrificing their entire lives. I know that and realize that, and I might not have realized that at a young age, but I see it now. Having them all up on the podium while I’m holding that number one plate, that’s a picture I’ll have hanging in my room for the rest of my life.