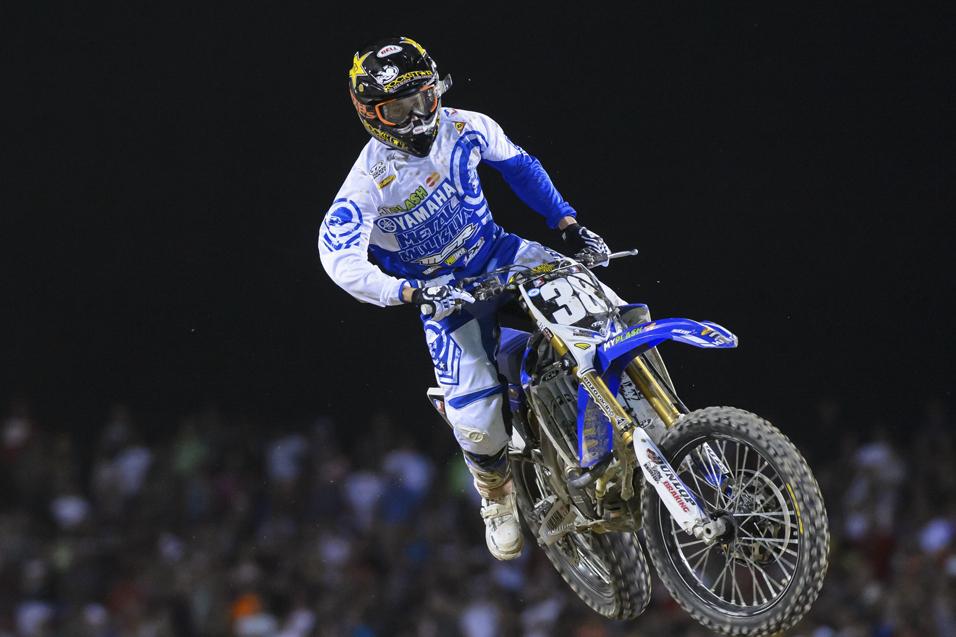 - Las Vegas could have been the final run for J-Star JDR KTM, which was scheduled to fold after Monster Energy Supercross ended, but the team has been rescued and will return next year. According to team manager Nathan Ramsey, the assets of the team—the shop, equipment, semi, and staff—will transfer to a new owner, who has also worked with NASCAR teams. Ramsey says the investor is not a high-profile guy like Joe Gibbs and has not worked with a motocross team before. But the deal came together so late that they will be unable to get a program built for this year's Lucas Oil Pro Motocross Championship. The team will return for the full 2014 season, although Ramsey says everything, including riders and even bike brands, is up in the air. Still, well done for Ramsey and company to keep the team going long enough to attract new ownership.

- Red Bull KTM's Ken Roczen rode great this year, but in the holeshot department he was severely lacking. In fact, the only holeshot the 2013 Western Regional 250SX Champion pulled all season was in Las Vegas in the Dave Coombs Sr. Memorial East-West Shootout. Roczen was so pumped on finally getting a holeshot that it was one of the first things he brought up when our Aaron Hansel asked him about his night—despite the fact that he’d just taken his first championship in America.

- Cody Gilmore extended his string of main events to three in a row in Las Vegas by transferring directly out of his heat. “Happy” was sixteenth-fastest in qualifying and finished sixteenth in the main, which boosted him to thirty-first in points for the year. If you're Gilmore right now, you're probably wishing the season was just getting started instead of coming to an end! 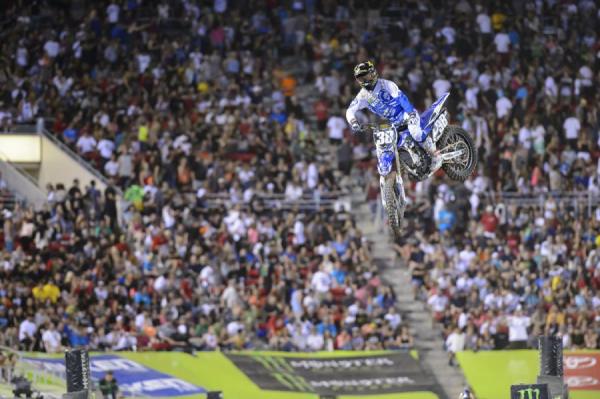 - The Shootout results are in and the West has officially taken the title of fastest region in 2013. While the number of riders who qualified for the race was pretty even on both sides (eleven West and nine East), Western riders overwhelmingly beat out their Eastern counterparts: In the top thirteen, only two-Marvin Musquin and Blake Wharton—were from the East. Of course Wil Hahn broke his hand in practice and Tyler Bowers crashed shortly after slamming Blake Wharton (check out this interview with Bowers for the story), so those numbers could have looked a little different.

- Kyle Cunningham always seems to find a little something extra in Las Vegas. This year, Mr. Vegas once again showed up in full force at the finale. Cunningham, who says the dirt in Vegas is a lot like the dirt he grew up on, matched his best result of the year with a fourth in the West main and went on to score second in the Shootout.

- The knock-down-drag-out brawl between Phil Nicoletti, Chris Blose, Ben LaMay, Vince Friese, and Jimmy Albertson to lock in a top-twenty result (and nearly $9,000 in prize money) for the year never materialized. LaMay sat the night out after tearing his MCL during the week, Albertson is still recovering from a broken wrist and opted not to race, while Friese raced a 250 to preserve a top-five standing in the East (he finished in fourth overall in the region). The final results? Nicoletti took seventeenth, Blose nineteenth, and Friese twentieth, despite not even racing a 450 all day. 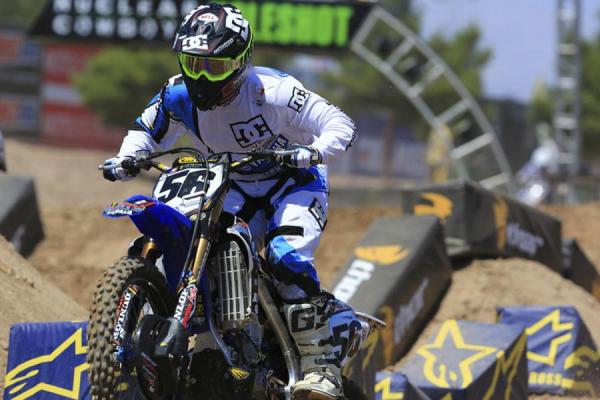 Kyle Regal made his first main of the season in Vegas.
BrownDogWilson photo

- With help from Valli Yamaha, Kyle Regal returned to Monster Energy Supercross in Seattle. It has taken a while for Regal to get back to speed—he missed the main in Seattle and Salt Lake City—but he qualified for his first main of the season in Vegas, finishing thirteenth on the night.

- Also making their first mains of the season were a pair of Pacific Northwest boys, Nicolas Schmidt and Tevin Tapia. Schmidt finished the night in eighteenth, while Tapia was plagued by mistakes and crashes and finished twentieth.

- Trey Canard’s feel-good season ended on a sour note. The Oklahoman, who battled back from nearly career-ending injuries, had to pull out of the race prematurely due to problems with his goggles.

- A few years from what he describes as “goon status” in supercross, privateer Weston Peick is slowly becoming a force on the circuit. The burly California native finished a season-high seventh in Vegas, giving him his fourth top ten of the season.

- N-Fab/TiLube Yamaha’s Bobby Kiniry bounced back from a highlight-reel crash in his heat to win the LCQ, topping the night off with a season-high twelfth in the main.

- It’s been a long, strange journey for Jake Weimer in 2013. After a solid start to the season, a battle with pneumonia and broken ribs curtailed his hot start. But Weimer finally looked like his old self in Vegas, leading his heat and then finishing a season-best fourth in the main. 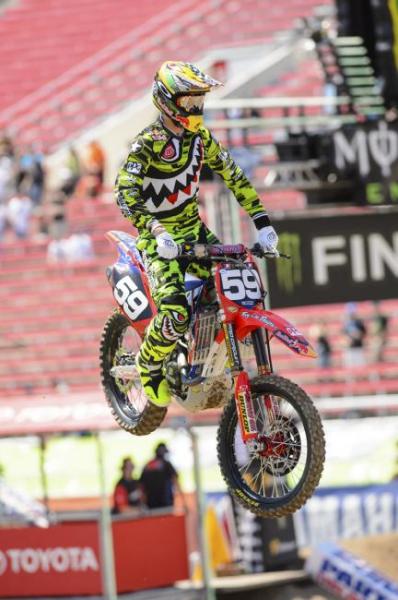 Christian Craig suffered a wrist injury in practice and may miss some time.
Simon Cudby photo

- Lucas Oil/Troy Lee Designs Honda’s Christian Craig had a huge crash in practice that sidelined him for the night with a wrist injury. We’re waiting for an update on his status for the Lucas Oil Pro Motocross opener at Hangtown.

- Eleven10 Mods Yamaha rookie Brady Kiesel, who made three main events in his rookie season, finished the season strong with a career-best eleventh in the 250 East main.

- When MotoConcepts’ Gavin Faith grabbed the early lead in the 250 East main, it marked the first time in his career that he led a main-event lap. Faith would drop back to finish the night in fifth. 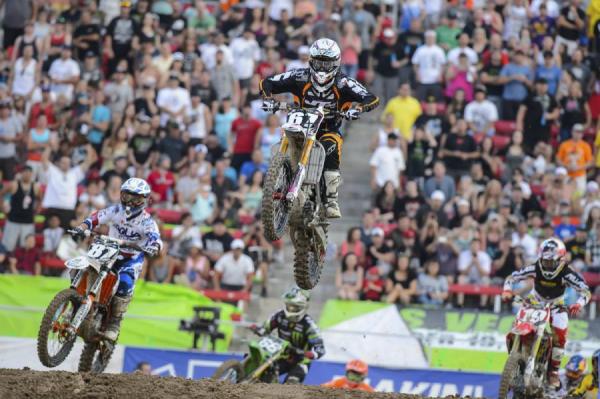 Gavin Faith lead a lap in the main event for the first time in his career in Vegas.
Simon Cudby photo

- AJ Catanzaro was back in the top ten in Vegas; his tenth-place finish was his third top-ten of the season.

- 51 Fifty Energy Honda’s Chris Plouffe made his first main since San Diego, riding to seventeenth in the 250SX West main.

- Gared Steinke, who joined the 250SX West Region in Seattle following his arenacross campaign, made his first main of the year, finishing thirteenth.

- Although his LCQ battle with Zach Osborne received the majority of the attention, Topher Ingalls’ run in the 250SX West main deserves some recognition, as he finished a season-high twelfth.