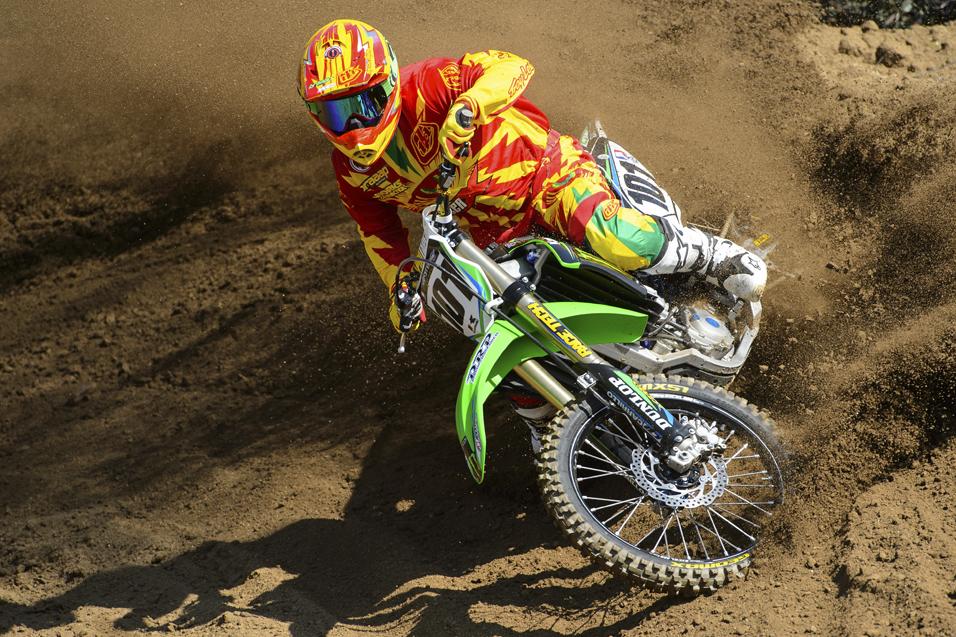 What do you think about these top supercross guys giving each other all kinds of high-fives, hugs and props at the end of main events?  I realize that there is certainly a ton of mutual respect between everyone if they race clean and show good sportsmanship and it looks more professional for the sport, bla, bla, bla, but personally I’d like to see a little Hannah-like behavior once in awhile.  I mean, why can’t these guys make a little respectable smack-talk and act a little pissed off and bummed about losing?

There is probably a fine line between throwing down MMA-style and the hugs and kisses they give each other every week, but all I’m sayin’ is that I’d like to see more aggression once in awhile…should I hang out in the pits after the main events, or is that when the Lot Lizards come out looking for the drivers of the team haulers?

Motocross fans are a hard bunch to please. When riders let their emotions get the best of them they get blasted in the media and by the fans. Remember Justin Barcia’s full-on freak out last year when he and Lance Vincent clipped before the finish line? And now there has been a very different vibe, particularly among the 250 east coasters, where guys are shaking hands and congratulating one another afterwards and you complain about it. Look, the east coast guys like Hahn, Musquin, Wharton, and Wilson are some of the friendliest, most down-to-earth guys on the circuit so it doesn’t surprise me that they are slapping hi-fives and cuddling just a little bit after the races. That’s just who those guys are. One thing that makes any sport great is different personalities within it. You want raw aggression? Watch Vince Friese or Tyler Bowers. Or watch Weston Pieck on the big bike. Or, better yet, watch Andrew Short blow Broc Tickle out again this weekend. That’s become the highlight of the night for me. All I’m saying is appreciate the personalities and styles that we have because the one thing that I’ll guarantee is that it will change. New guys will come in and bring their own flavor, some of it good and some of it bad. Personally, I would much rather the guys keep it professional than scream and whine like a bunch of diaper babies. I agree that sometimes it would be nice to see genuine emotion out of some of these guys, be it anger or frustration… yeah, I’m talking to you Ryan Dungey. But I’ll take his calm, classy demeanor over an arrogant ass any day of the week.

I know a lot of teams have fun with pranks or bets over the course of the season. I remember the TLD team used to do some kind of pushup thing when you said a certain word. What was the best bet or prank you had while you were there or while you were racing?

I had some great times over at TLD. I was lucky to have an awesome crew and guys who were afraid to keep it light between the races. We did play a game for a while where we tried to get each other to say the word “mine,” at which point they had to do ten pushups. Troy even got in on the game and he had to leave the pits at one point because he was sweating from doing pushups. We had games where we would challenge each other to work certain words into interviews. Wil Hahn and Jake Moss used to crack me up because they would use ANY word I gave them. The best bet I had with my guys was with Jake Moss and Sean Borkenhagen in 2009. They each made bets with me that if they didn’t have their best finish by the Colorado National that year that I could give them a haircut… Whatever I wanted. Jake was actually on his way to a podium finish in the 450 class when he stacked it up pretty good and knocked himself out. It was a bummer. I told him I would give him a pass since he got hurt but he was a man of his word and we met at the shop for haircuts. It’s hard to tell from this photo but I cut a sweet pair of hair headphones into Borky’s head, with a wire taped behind his ear to make it look legit. And Mossy got a Bozo the Clown haircut with a giant cul-de-sac on the top. They each had to keep the cut for three days before shaving it off. Those were good times.

I know you get tons of people writing you about how great you are and don’t want this to be put into that category so as to lessen what I want to say. I do however, want to compliment you and thank you for one of the best written farewell articles I have ever read in last week’s Townley article. I respect a lot of riders in the sport when it comes to riding ability, but there are few that stand out in the integrity department. We need more articles like yours that highlight these types of riders. I remember when Ben sat Alessi down and gave him a little fatherly rebuke a few years ago. From what I read it wasn’t mean or malicious but with concern for Mike and the sport. I smiled the whole time I read your article as I remembered some of my own Townley fond memories.  I wish the best for Townley and his family and hope he can mentor a few riders on the art of being a class act.

Thanks again for your article.

P.S. You would definitely be in the class act category. Just saying

Thank you for the letter and despite the trend of doing so, it is not necessary to stroke my ego to get your letter published. I’m glad that you had a chance to meet Ben and see the kind of guy he was. I tell people all the time that I like/dislike riders based on the kind of human being they are, not how good they are on a bike. Everyone lining up at a supercross is an amazing rider. Period. But not all of them are quality individuals. Ben was the kind of guy you introduce your son to and say, “That’s how a professional acts.” He will be missed here in the States.