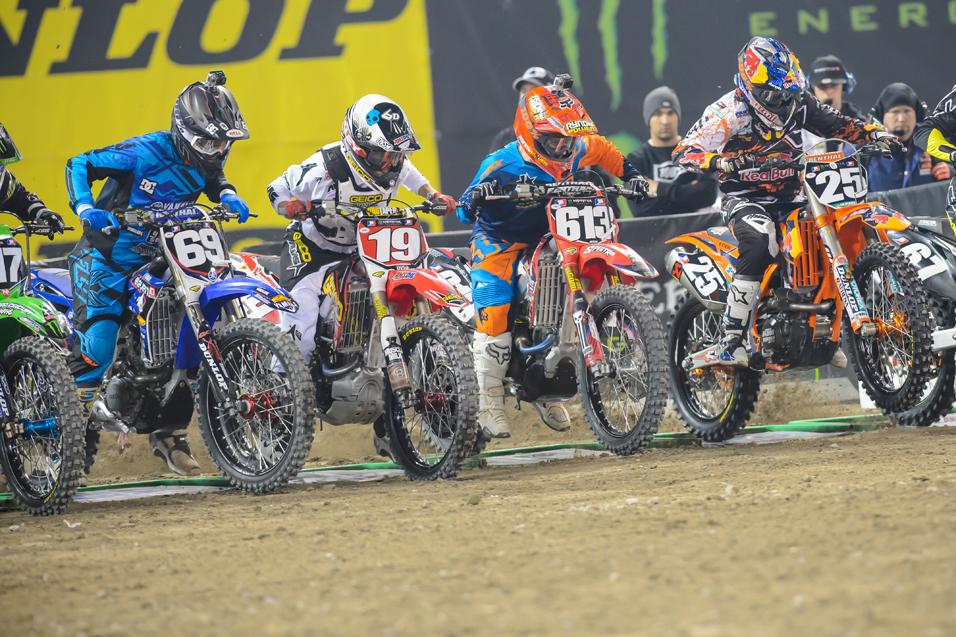 - Ryan Dungey is often thought of as Mr. Consistency, but his speed was on display in the Toronto main event. He didn't win the race, but he did log the fastest lap time with a 57.695.

- Race winner Ryan Villopoto was only third fastest, as his 57.746 was also topped, just barely, by Davi Millsaps' 57.740. This puts the three fastest within less than a tenth of a second in their fastest lap. That's close.

- As the soft Toronto dirt broke down, lap times slowed, too. James Stewart turned in his fastest time on lap eight, and that was the latest any rider turned in a fast lap.

- Villopoto turned in only four laps over the one-minute mark. Dungey had five over one minute, and Millsaps had six.

- Chad Reed said post race that he got a good start and didn't know what to do with it, and also that he rode better once he settled in. The lap times reflect that. On laps two and three, CR22 turned in two laps of over a minute. He then jumped into the 58s on lap four, followed by a 59, and four more 58s. He wouldn't go back over the one-minute mark until lap 13.

The middle of the race was the pivotal point in Toronto. The race leader, Millsaps, was holding his own out front, actually going a little faster than Villopoto on laps eight and nine. Then Villopoto evened him up on lap 10. On lap 11, RV closed in and made the pass. Once he had a clear track at the beginning of lap 12, RV put the hammer down to try to sprint away. His 57.889 certainly did that, adding over two seconds on Millsaps in one lap.

Meanwhile, Ryan Dungey was making a push, going faster than Millsaps and Villopoto on lap 11. But he stalled his bike on lap 12 and couldn't jump a triple. The three seconds Dungey lost to Millsaps there would cost him any shot at second place. 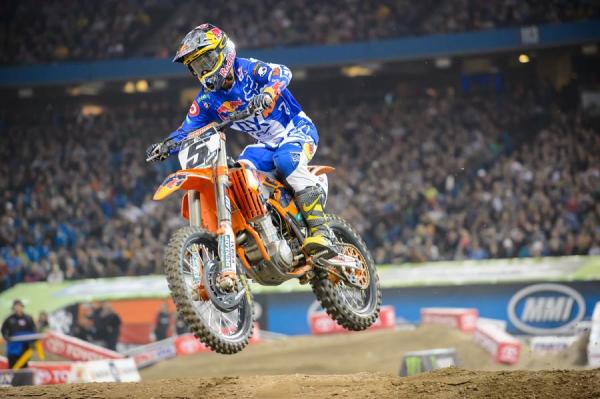 - Hahn also had the fastest average lap time, with a 1:00.082 topping Musquin's 1:00.146. How come Hahn didn't win the race, then? The official lap times don't begin until the riders have crossed the finish line for the first time. Musquin did all of his damage before that, between the start and the beginning of the first full lap.

- Hahn was partially done in by a bad gate pick, courtesy of a crash in his heat race. He was too far outside to control the first turn, even though he had a good jump. "And I should have been more confident and doubled out of the first turn," he told us yesterday.

- Martin spent a lot of the race stuck behind Vince Friese. He ran 1:01s on laps 7, 8 and 9 and then a 1:00.713 on lap 10, when he made the move on Friese. He then ran his fastest lap of the race on lap 11, and kept digging all the way to the finish. You can see where he made up ground on third-place Blake Wharton below.

A rookie versus a veteran in the class, Martin made a late bid at taking a podium spot from Wharton, and nearly succeeded. Once Martin passed Vince Friese for fourth, he put his head down and gained nearly a second-and-a-half per lap on Wharton on laps 10-13. Martin's bad lap on lap 14 helped Wharton hold his ground, setting up a spectacular finish, where Martin showed a wheel in the final corner. Martin is strong late in the races, which is not a surprise to those that saw him win races as an amateur. 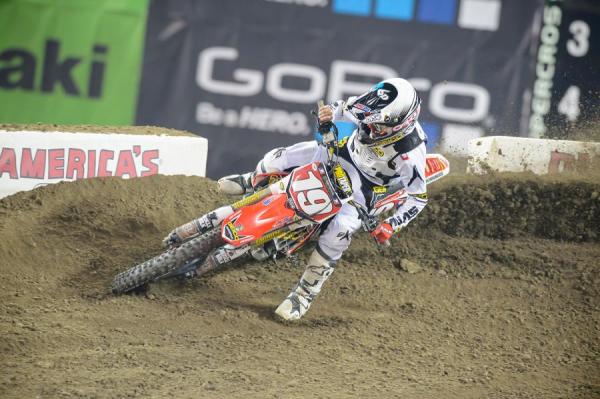