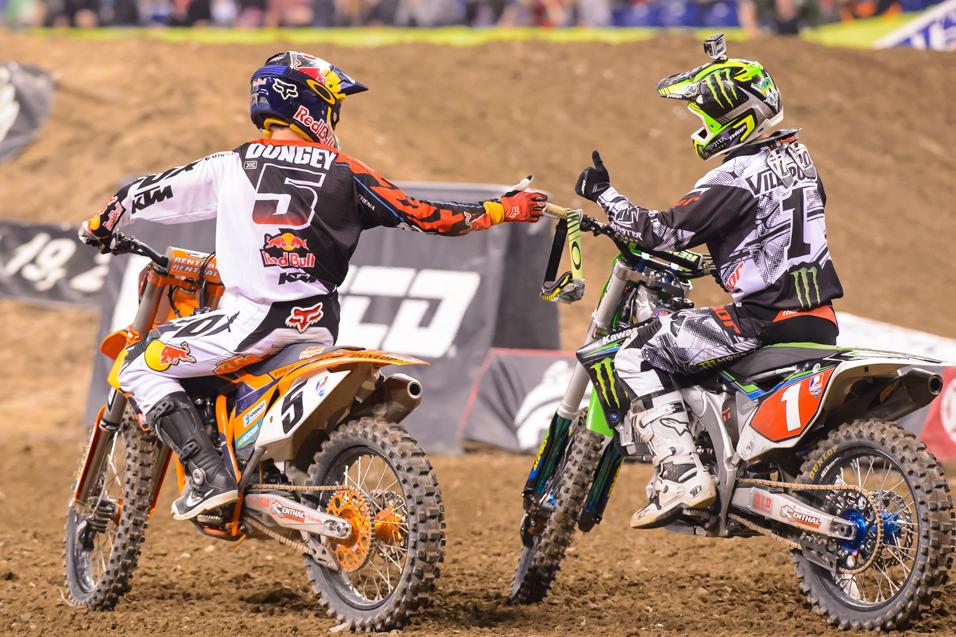 Saturday night's race at Lucas Oil Stadium in Indianapolis practically served as a microcosm for the entire 2013 Monster Energy Supercross season so far. The building was packed, the fans were engaged, and Kevin Windham's transfer may have earned the biggest applause of the night.

The winner was the man most expected to win, two-time defending champion Ryan Villopoto, who is beginning to ease away from the early leader, Rockstar Energy Racing's Davi Millsaps. Millsaps once again had a solid night, riding in podium position most of the way and maximizing his point value on a night when he was not as fast as the winner. Red Bull KTM's Ryan Dungey showed inspired speed, maybe more so than he has in any other race so far, including the one he won back at A3. James Stewart had the speed to win, but once again made an unforced error and his inconsistency remains the most consistent thing about him. Chad Reed looked like he was riding hard but he just didn't move forward fast enough, and Trey Canard's title contention continued its steady slide, this time with a crash he was fortunate to walk away from. Justin Barcia was fifth, and Andrew Short seventh—right about where they were pegged to finish from the start of the season (even though Shorty is now on a BTOSports.com KTM and not a red bike). And the RCH guys—Broc Tickle and Josh Hill—hovered just outside the top ten, which is not the finish their bosses Ricky Carmichael and Carey Hart probably wanted for them. 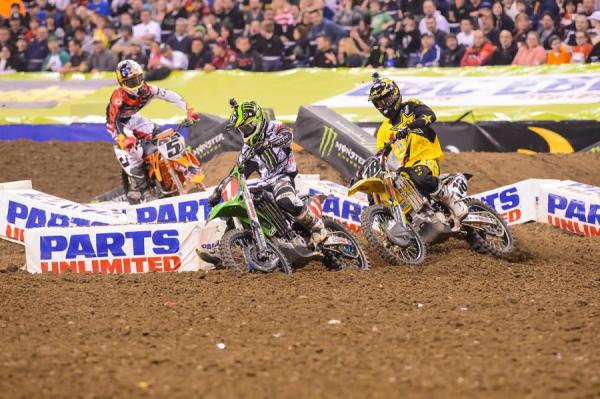 Villopoto edged away from Millsaps and Dungey in Indy, and in the series.
Simon Cudby photo

Add it all up, and it's as if we've entered a holding pattern where everyone's performances so far could be summed up by Saturday night's racing. Will it continue like this? I really don't think so. With only six races left in the series, we may see some folks hitting the panic button. Sure, there is a whole summer of outdoors to come, but for guys like Reed and Canard, who expected to at least win races, and Millsaps, who has his first and best chance at winning the title this late in a series, why not throw caution into the wind and take the fight to Villopoto?

Because if there's one thing that we've seen before, it's Villopoto's McGrath and Carmichael-like ability to manage a points lead. Since his rookie year of 2006 he's earned four outdoor championships and two 450 SX titles, which means he knows how to close the deal. He's not one to count his chickens before they've hatched, and he seems to have hit stride at the right time. This championship is now his to lose.