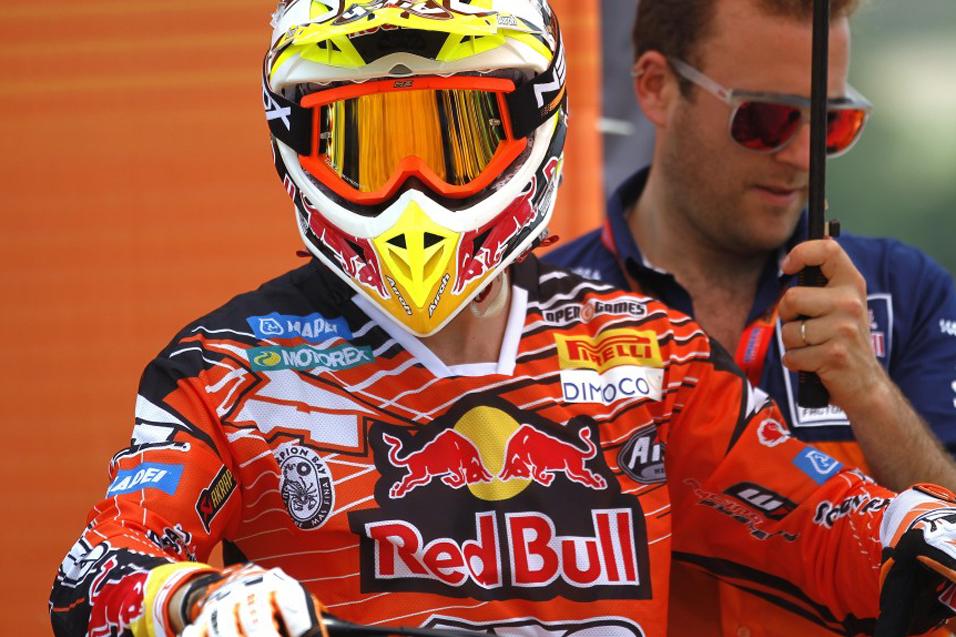 With the second running of Grand Prix motocross’ experimental Super Final format, the attraction and drama abated slightly compared to the previous race, but there was still some intrigue thanks to the first-ever visit to Thailand for the FIM series. And most were impressed with the Si Racha circuit. But the mix of MX1 and MX2 classes into the final moto continues to divide opinions.

While the combination of the twenty fastest riders in each class for a blockbusting moto has spectacular potential, it also needs more analysis. Issues such as clarification of the changing standings per class and the aspect of safety with 250s and 450s (and 350s) hammering through wave sections  -- particularly in the opening laps -- still have to be dissected and evaluated. “I think we have to get used to it,” said MX1 star and world champ Tony Cairoli. “I think it would be better and safer for everyone if we entered the gate mixed rather than MX2 first and then MX1. The riders would form more of a ‘spike’ into the first corner. For sure you can get stuck in the pack, but that’s the same for everyone.”

While Super Finals and formats are still a main talking point in the GP paddock at this time, there were other headline aspects of this second round of eighteen. Red Bull KTM’s Cairoli claimed Grand Prix victory with a 1-1 scorecard and teammate Jeffrey Herlings came within a wheel of snatching an impressive third position in the Super Final, while only two of the first thirteen bikes using a quarter-litre engine. 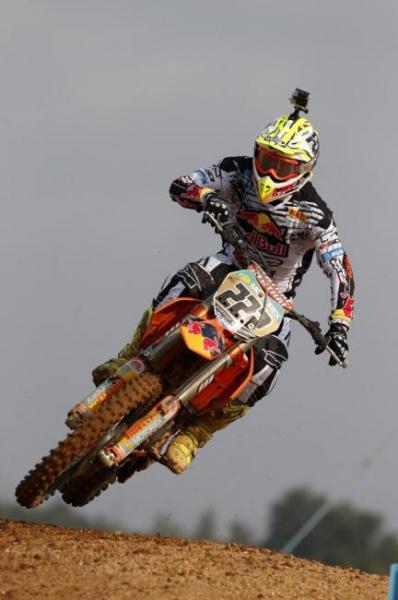 Cairoli takes over the points lead after his win in Thailand.
Ray Archer / KTM Images photo

The podiums of Cairoli, Gautier Paulin and Clement Desalle (MX1), Herlings, Romain Febvre and Jose Butron (MX2) were almost identical to Qatar with only Butron celebrating his second career trophy as Dean Ferris’ plight faded in the Super Final with a numb hand. Febvre’s easy style is increasingly catching the eye in MX2 while Paulin and Desalle appear the only likely chasers for Cairoli (now with the red plate to match his gold one) at the moment.

On the track, unlucky crashes for Evgeny Bobryshev dumped the works Honda-mounted Russian out of rostrum contention and Cairoli’s MX1 awning companion, Ken De Dycker, shone in one outing (second in Moto1). Paulin and Desalle’s spat for second place in the Super Final led to the Suzuki rider -- who was lucky to escape an immense superman get-off cresting the biggest double on the layout earlier in the day -- spouting off at Paulin in the winner’s circle afterwards. Paulin had flicked his Kawasaki over the same double after passing the Rockstar Suzuki rider and Qatar GP winner (the only rider to clear it), but his exuberance carried a price on the last lap as he ran off the track in the next turn. Desalle dove for the position and Paulin motored back across, clipping the Belgian at the same time whacking his foot and keeping his rival back in third. Dramatics aside, Kawasaki’s Tommy Searle impressed once more as the leading rookie in MX1 and has a gumption and fire that belies his relative inexperience in the class.

The cuts and thrusts of the racing were the meat of this particular show, but it was a roasted meal. The temperatures at Si Rancha were punishing. Humid and sunny on Saturday -- with a short burst of rainfall that was so heavy it threatened to wash the track away -- and then cloudy but topping 95 degrees anyway on Sunday. The riders were finding ways to deal with the heat and hydration systems were a common sight. It was difficult to escape the suffocation in the makeshift paddock and all in all it was an uncomfortable weekend for a collective of Europeans. Desalle and Herlings were just two to comment on the new ‘status’ of the track with the lines and bumps taking some time to come through (but when they did there was some nice choice and variation in the sections) while Youthstream President Giuseppe Luongo himself admitted that the tracks would have to be chiselled to allow a more level playing field for 250s and 450s together. Si Racha had some quick, open sections and big jumps for the MX2 class to contend with. 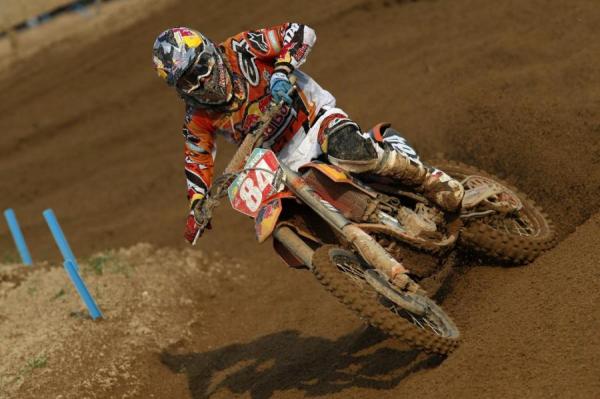 Forgetting the constant sweat and a few (expected) rough edges to the set-up there was a positive vibe to this Thai Grand Prix. Proximity to a touristy location helped. After Qatar it represented a shift from one cultural extreme to another. People clearly ‘live to enjoy’ in Thailand and this was true of their following for motocross with a brand new audience for Grand Prix racing entering the facility complete with smiles and a tangible feeling of expectation; from small attendance at Losail to a healthy and curious crowd at Si Racha. It was good to see and there’s nothing like experiencing enthusiasm for the sport in a complete new part of the world.

Nearby Pattaya was loaded with motorcycles and scooters, enough to seemingly make Daytona Bike Week look like a local ride-out. The Japanese brands sell serious quantities of bikes in the territory (even with a market share of just 4%, Suzuki offloaded 80,000 units a year) so the Thai visit is more than just a fresh site on the calendar, it is an important signal of how the FIM Motocross World Championship is trying to breach mainly European horizons. The organizers have another two years contracted to try and blossom the sport further in their homeland (the Thais entered their first team in the 2012 Motocross of Nations, don’t forget) and with healthy support and backing, their presence seems assured. In what shape or form Grand Prix will be when it returns in twelve months time is another matter, however. It’s unlikely we’ll learn of any major repercussions for the future of the 56 year old championship until a meeting between the powers-that-be is held on June 19. By then, two more Super Final ‘trials’ will be run in Brazil and Mexico in May. 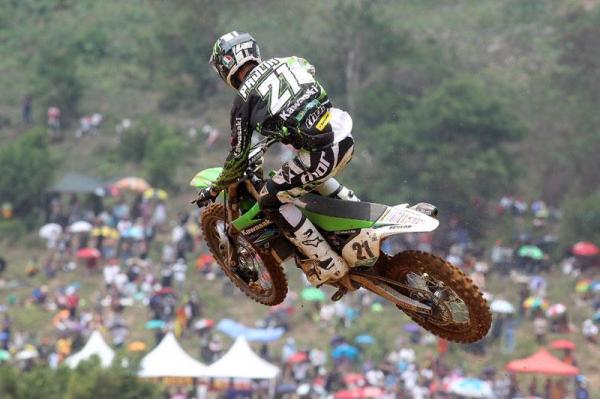 In the meantime, GP comes back to Europe and into the Dutch sand of Valkenswaard on Easter weekend. The Eurocircuit is a fortress for both Cairoli and Herlings. The Dutchman is unbeaten in three years and six motos at the track near Eindhoven and on the evidence of the first two flyaways so far there doesn’t appear to be much that will knock the duo from their thrones. 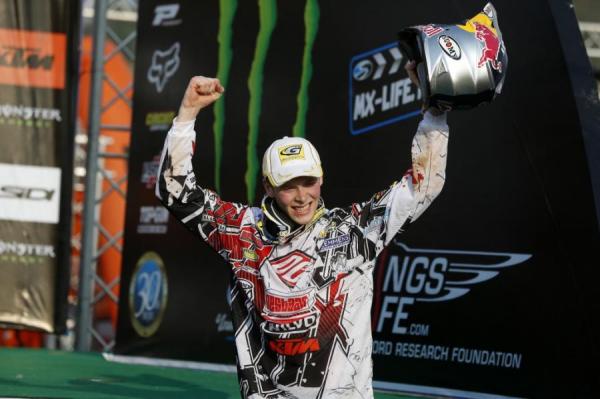