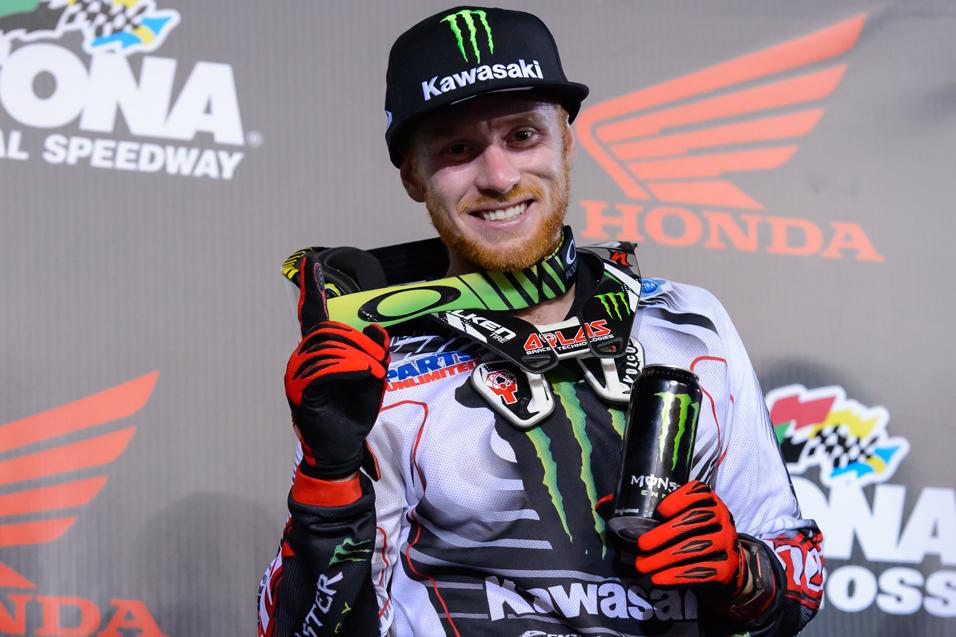 Monster Energy Kawasaki's Ryan Villopoto is on a roll, having won three of the last four races -- including two straight. A win in Daytona, coupled with a tenth from Davi Millsaps, has vaulted Villopoto into the points lead for the first time in 2013. Steve Matthes caught up with him after the race.

Racer X: Great win tonight. You killed it.
Ryan Villopoto: It was good. We were a little off in the qualifier but I was able to… we ripped a great start in the main. Well actually I made a little mistake and was able to pass those guys back and get up.

You slid out a little bit?
Yeah, I slid out. The berm just kind of went away and I made a mistake. But I was able to get back and pass those guys.

At one point Dungey was reeling you in … maybe not reeling you in, but made up two or three seconds. It was later in the race. Did something happen? Lappers? Did you see it? Were you backing it down?
We were talking on the podium, the lighting’s not very good and this is one of the worst Daytona tracks I’ve ridden just because I think it was drier when we came here. It was the driest it’s been and it made it more rough. I don’t know; it was tougher. There were a few laps where ... but I obviously knew where he was. I was gauging him. I wasn’t too worried but he caught a little bit and I was able to pull it back out and just keep it where it was. 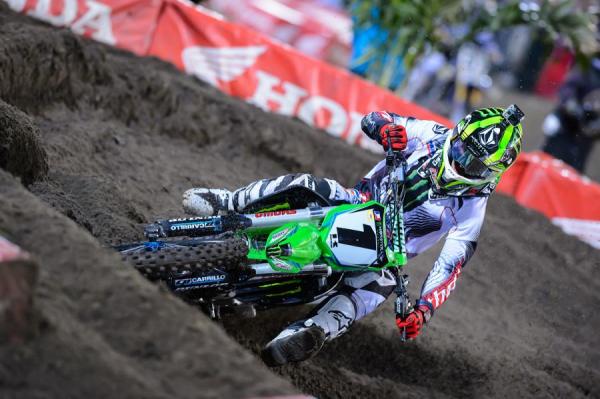 Ryan Villopoto is the new 450SX points leader after his win in Daytona.
Simon Cudby photo

Any sketchy moments for you out there?
Always. You’re not going to leave Daytona without one. If you don’t have one, you’re not riding hard enough.

Points leader now, bro.
Yeah, red plate. We haven’t had that since Anaheim 1. It feels good. We’re in a good position. We’ll just try to keep doing what we’re doing.

Did you like the track? In practice it looked like fun, but it didn’t look like fun after that. But did you like it?
I thought it was good. Could have used a little better lighting. Man, there were some sections that were really gnarly that they could possibly have maintenanced throughout the day or before the main.

How much did you stray on your supercross setting, if anything at all?
Same setup, just clickers here and there. We made some changes but it was all clicker stuff.

Did you run your front tire like normal?
No, different front tire.

That’s different for you, to run a different tire.
Yeah, more aggressive. 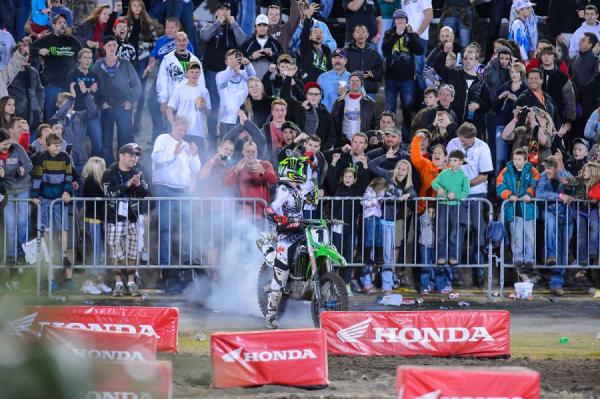