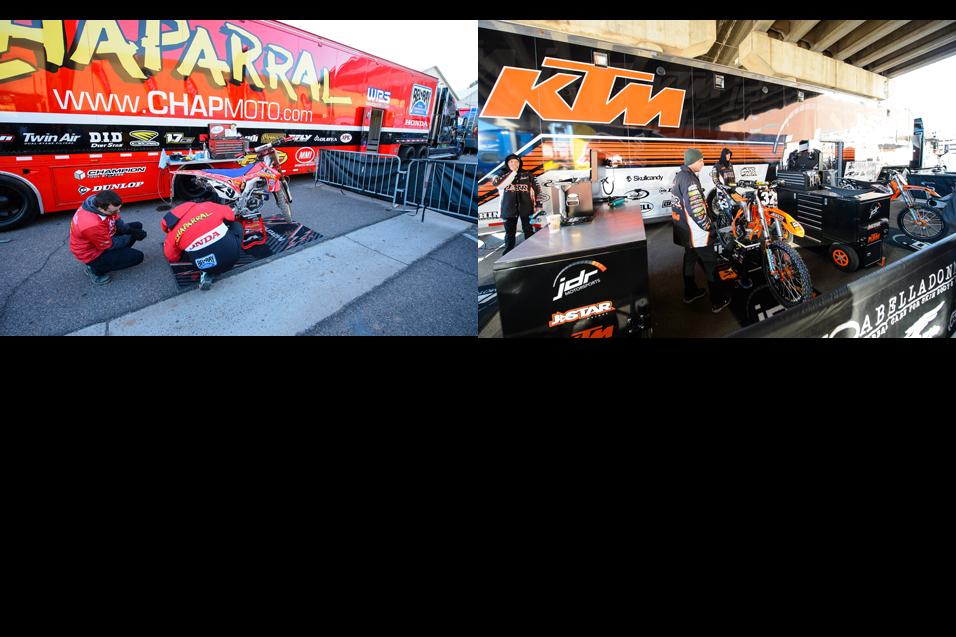 Two teams folding in one week. First, J-Star JDR Motorsports KTM, and now Chaparral Honda (L&Mc Racing). What's this mean? Why did it happen? Our staffers share what they know below, be sure to leave your ideas in the comments section below.

Before you condemn Larry Brooks over the collapse of the Chaparral Honda team, keep in mind what the team was supposed to be. During the entire run up to this program, in 2011, Brooks was assured he had San Manuel's big money as a title sponsor, and that would have easily covered the bill. Then, right before the 2012 season, San Manuel went through a management change and decided to about-face on the racing thing, leaving Brooks with a team, infrustructure and contracts, but without a sponsor.

Since then he's been trying to patch it together, but even last year's addition of Chaparral wasn't enough--Brooks told me in Phoenix they knew all along they'd need even more funding, and the money was getting tight. He had irons in the fire that weekend and hoped to have something new for Anaheim 2. We didn't see anything new there, and after the race, Shorty's works Honda had to be returned to the factory Honda rig. The team was no more.

Of course, Saturday also marked the end of Kevin Windham's racing career, but GEICO Honda people tell me they can't just bring Shorty in as a replacement. For one, Windham's bike is still going to be used by Windham himself in opening ceremonies each week, so it's not really available. Second, Short's full works bike is an expensive piece, and any team that wants to use it has to pay for it, and it's hard to find that kind of money mid-season.

As for JDR KTM, the seed money from that team actually came from the team owners themselves--Jay and his father Derek Rynenberg (hence the initials JDR). The Aussie family had actually made a killing in the fence business from the 2000 Sydney Olympics, so they could fund racing themselves for awhile. We've heard some other investments didn't go so well, though, and they couldn't keep shoveling money into the motocross effort any longer. It's too bad, because JDR was really building the right way, with a good crew and support. But once you don't have the money, you can't do that any longer.

For both, then, it comes down to this: they were each one big-dollar sponsor away from making it work. Same story we heard two months ago with Jeff Ward Racing, too. Even in a world where energy drinks have swooped in to save quite a few, a realistic look around the pits shows there's just not that much outside money coming in--and in this sport, there really never has been enough. Satellite teams have always had a tough time staying afloat, and what's happened here is, sadly, nothing new.

We knew something was amiss with the L&Mc team before supercross started, the sponsorship money coming in just wasn’t what was going out. I did some digging around and confirmed some things but was respectfully asked to keep it quiet so I did. But there was something wrong, no doubt about it. Andrew Short even made mention to me that he was having trouble sleeping with all the team stress.

In these tough times, sponsors are hard to get and-newsflash-it takes a lot of money to run a program. Don’t worry, Short is racing this weekend in Oakland for a new team that has yet to be announced and for a rider like Andrew, he’ll be fine. I feel for the other guys on the team like Ricky Gilmour, Jeremy Hoyer, Nathan Alexander and the rest of the team. They’re the ones that are really going to suffer.

It seemed like a great thing when Larry Brooks teamed up with Jeremy McGrath to start a brand new team and on a factory Honda at that. Supercross.com was announced as a title sponsor (after San Manuel Casino dropped out) but shortly after the 2012 season, they bailed as title and the team was forced to the sidelines for a few races although Short himself was healed up from an injury and ready to go. Of course there was the storybook Seattle SX win in a van and then Chaparral stepped up in what looked like a good deal for everyone. But we know now that it was just a temporary stopgap deal to get the team through some tough times. It wasn’t enough to carry on.

And this announcement comes on the heels of the JDR KTM team announcing that they’re shutting operations down after supercross due to financial difficulties. They’re going to honor all the agreements through supercross and then this team will, like L&MC, shut it down leaving some fine people looking for a job.

I also know there’s another team in the pits that is barely hanging on right now with people not getting paid- it’s a bad deal for some of the people in the pits and although everyone means well, sometimes it’s just not feasible to go professional dirt bike racing. There’s lots of established programs that do well (Pro Circuit, GEICO Honda) but the new guys, guys like Mike Genova and Alan Brown, deserve credit for getting things going in a tough environment. I’m not saying the sport needs to do more but maybe there needs to be some sort of incentive for teams, a financial one, to keep people going who support the sport. Sort of like what NASCAR does with its owner points, although that sport obviously has a much bigger pie to divide wth huge TV money and all.

Anyway that’s for smarter men than me to figure out but I’m definitely smart enough to know that this week was not what we need in the sport.