Last Saturday night I got the rare privilege of watching a supercross race with two genuine heroes in the sport, both former 125 SX champions. Ivan Tedesco is between rides right now, and Kevin Windham of course announced his retirement during opening ceremonies, then headed upstairs to take it all in. They stood atop a small ledge outside the windows of the Knothole Club, right above the field where they both used to do battle. What they saw was a tour de force by defending champion Ryan Villopoto, who simply dominated the 450 proceedings. They also saw an early test of the mettle of both points leader Davi Millsaps and the Phoenix winner Justin Barcia, as both had to race what may have been the most competitive LCQ of all time.

The night would end badly for Barcia, of course, with a badly bloodied nose, while Millsaps would miss the podium for the first time. Even so, he continues to hold the red plate for another week.

So what impressed Windham and Tedesco the most? Over the course of about four laps in the last half of the main, they watched Villopoto closely as he absolutely blitzed the track on his Monster Energy Kawasaki. Both were seeing him from a perspective they've rarely had over the course of his rise to supercross prominence, and both shook their heads in awe at a few of the downright perfect trips he took up and down rhythm sections. To paraphrase K-Dub, “I’m glad I'm not out there chasing that guy.” 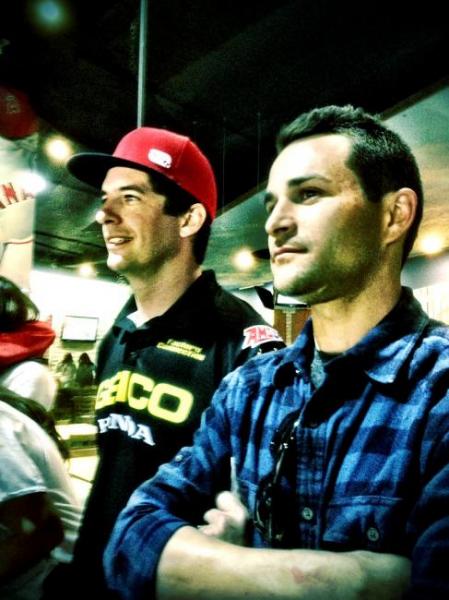 K-Dub (far) and Tedesco (near) take in the action at Anaheim.
DC photo

They also saw another difficult night for James Stewart, who we now know has a torn ACL, and a tough night for Ryan Dungey, who still doesn't look comfortable on his Red Bull KTM. Chad Reed, who spent some time talking to Windham as soon as he heard that Kevin was going to call it a career, made some progress to the podium, and he certainly looked happier and faster than he's been in 2013, though he still has some ways to go.

And finally they saw the man who has been the most consistently fast rider in these first three rounds, Muscle Milk Honda's Trey Canard. With every race, he seems to get a little faster, and while he doesn't have the points lead—Millsaps has been almost as fast—#41 is building momentum with each race. And this time he didn't falter on the last lap like he did in the first two rounds.

The takeaway from the first race of the new life of Kevin Windham was simple and honest: He couldn't believe how fast the kids were going, and he seemed quite happy with his decision to roll his bike back away from the starting gate. Because while he could certainly still ride at that level if he put his mind to it, his heart just wasn't in it anymore, and he could look back proudly on what he did. That old guard I mentioned last week just lost one of its pillars.

Oh, and I also think Ivan Tedesco was hoping K-Dub would offer him his bike!
Presented by:
Read Now
July 2020 Issue Now Available