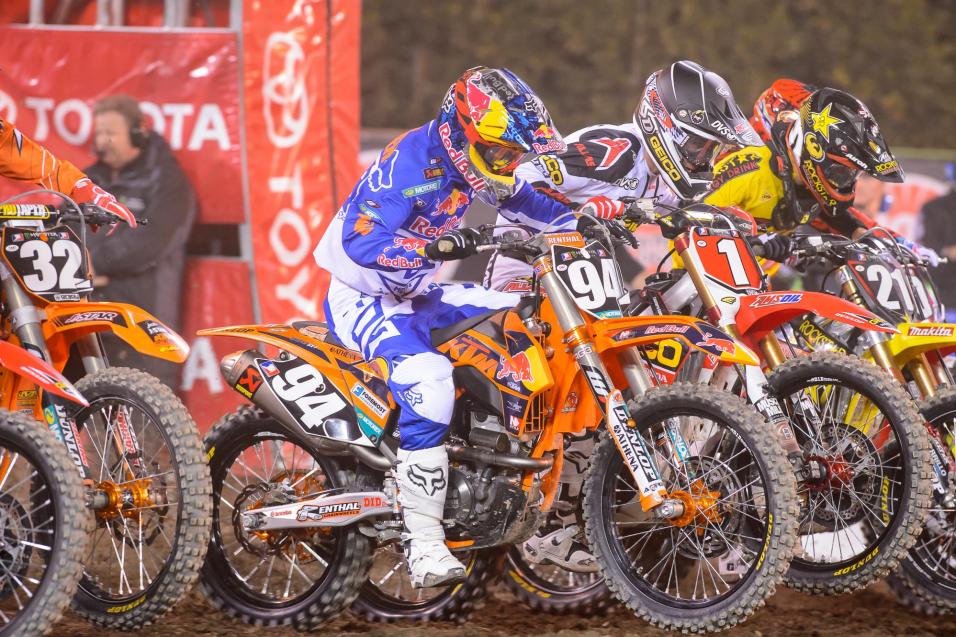 Okay, so Ryan Villopoto went 16-2 in the first two races. But there was hardly panic in Monster Energy Kawasaki land, because RV showed he still has all of his old speed at those races. This time, he kept it on two wheels and made it look much easier than it should be as he sliced to the front. Some mid week testing definitely put RV closer to the comfort zone, but, again, he wasn’t way, way off, speed wise at the previous races. But he was really, really good tonight.

Bad break for Justin Barcia, who goes from first last week to last this week due to his big case job which left him with a gash near his eye and a bloody nose. Honda folks say they’ll give him the concussion test this week to make sure he’s okay, but, he didn’t really hit his head that badly so they don’t expect there to be any problems there. Expect Barcia to be a go for next weekend’s Oakland race.

Chad Reed looked much, much better this week than last. He consistently popped up near the top of the leader board in practice times, prompting his TwoTwo Team Manager Dave Osterman to say, “We’re not dead yet.” Reed was happy to say the team didn’t need to make huge changes to the bike all day—they were changing clickers instead of entire components. 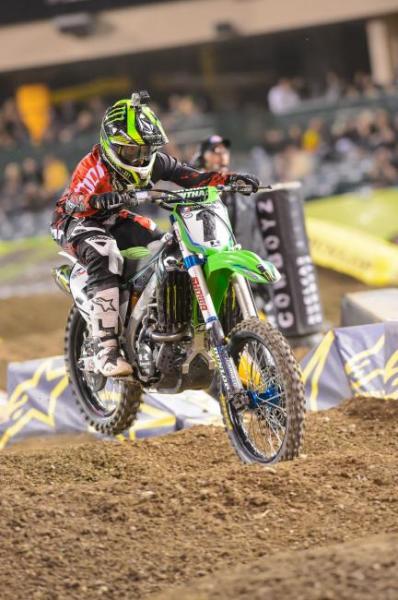 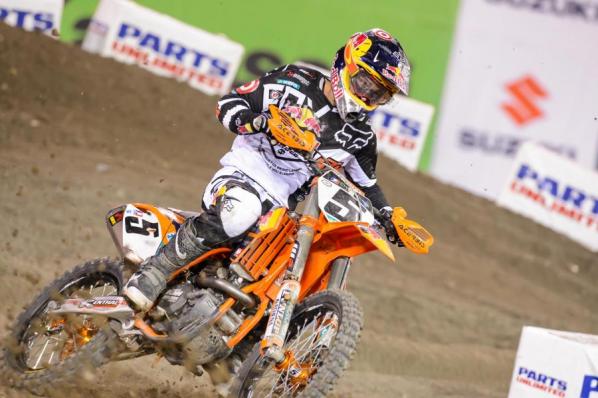 Not a good one, again, for Ryan Dungey. A bad start and a crash in his heat race nearly left him in the LCQ again, but he barely escaped with eighth in that race. A bad start in the main left him mid pack, and he never made much progress throughout. Late in the race he did catch Jake Weimer in a battle for fifth, but just missed the spot. That’s two-in-a-row outside of the top five for the usually mega-consistent Dungey.

Justin Brayton made some strides this weekend, finally putting the thumb injury he suffered at Anaheim 1 behind him. Brayton also won his heat race, but a bad set of opening laps early in the main left him playing catch up. He finished eighth.

Points leader Davi Millsaps almost had his night end about five seconds into the evening. His bike literally locked up down the start straight in his heat, sending him flying over the bars. He shooked it off and returned for the LCQ, where he met up with Barcia, who had crashed in his heat race. They dueled, and Millsaps made the pass and got the LCQ win. He then pulled an awesome start in the main despite a bad gate pick.

James Stewart came clean on his knee injury situation, admitting he had a torn ACL in his right leg. Stewart says the leg is getting stronger and he’s able to do more riding each week. But his progress in this main event was slowed when he got into a battle with Josh Grant, and then went down in a corner.

BTOSports KTM’s Matt Goerke rode awesome, putting his machine in ninth place. And everytime he battled with one of the big-name riders, he held his own and maintained a solid pace. 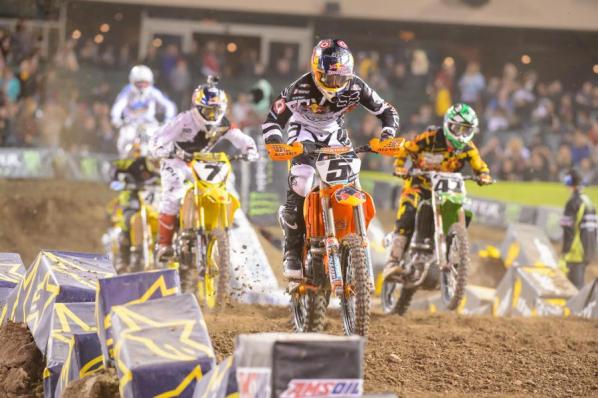 There may not be another rider that commands the respect Kevin Windham does, so the entire pits, it seemed, were stopping by to offer their well-wishes as he announces his retirement. Expect to see Windham at the races plenty this year signing autographs and coming out for opening ceremonies.

A huge pileup early in the Lites main ruined the night—or more—for several riders. Ryan Sipes, Max Anstie and Michael Leib were among the riders down. Sipes took a trip to the hospital with a suspected thumb injury, and Leib and Anstie were also getting checked out. We’ll have updates as soon as we can get them.