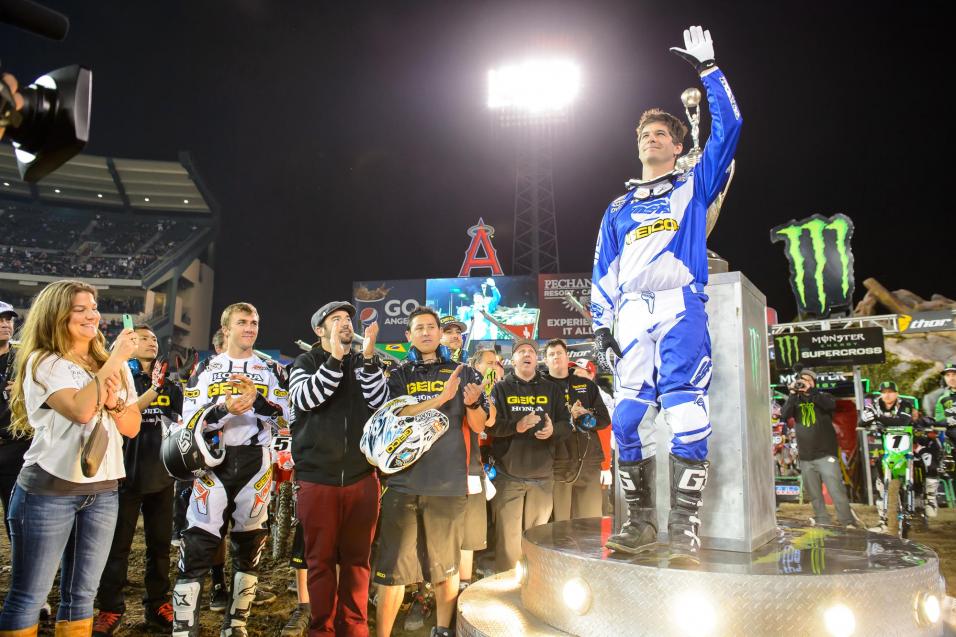 Early, it looked like it would be a wild race, through. Jake Weimer holeshot the main event on his Monster Energy Kawasaki over Honda Muscle Milk’s Justin Barcia. Barcia, last week’s winner, had to go through the LCQ to make the main after a heat race crash, but pulled a good start anyway. But Canard was soon the man on the move as he passed Barcia for second. Barcia would later have his problems when he cased a jump and slammed his face into the cross bar, giving him a cut above his eye and a bloody nose. Unable to see through the blood, he was forced to pull off and call it a night.

Canard then passed Weimer for the lead and held it for a few laps. Meanwhile, Villopoto was shuffled all the way back to seventh at one point, behind Weimer, Canard, Barcia, Reed, Rockstar Energy Racing’s Davi Millsaps and JGR Toyota Yamaha’s Josh Grant. But once Villopoto found his groove, things changed quickly, as he started passing riders quickly until he was into second by lap four. Then, he put on a charge to catch and pass Canard for the lead and pull away from there.

“I though it was a good track for racing and I was able to be patient and make passes,” said Villopoto.

“Once I saw the # 1 behind me on the board, I knew he was coming,” said Canard. “He was on fire all day. I was just happy to get second.” 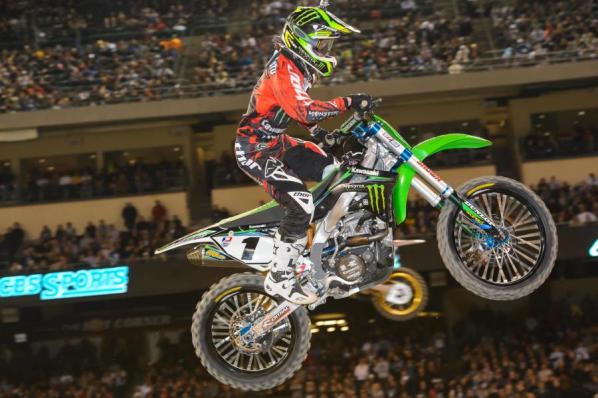 No crashes or problems for Ryan Villopoto at all--and with the kind of speed he had at A2, those are the only things that could have stopped him. 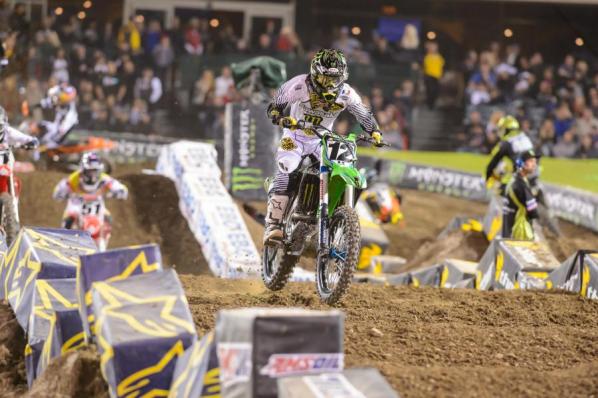 Jake Weimer led briefly but the field was charging hard behind him. 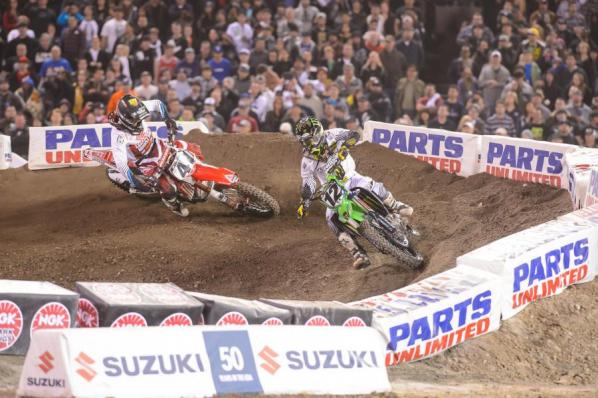 Weimer and Canard battled for the lead, with Canard getting the spot. 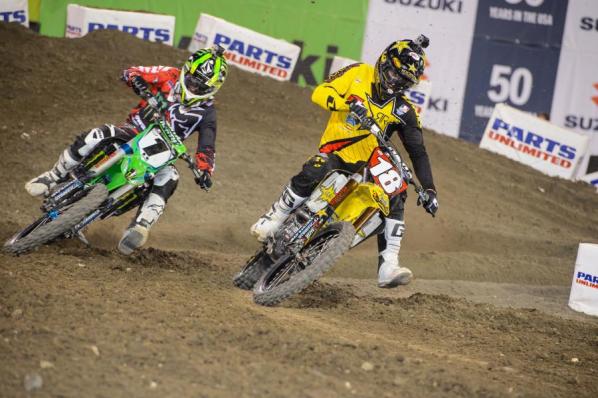 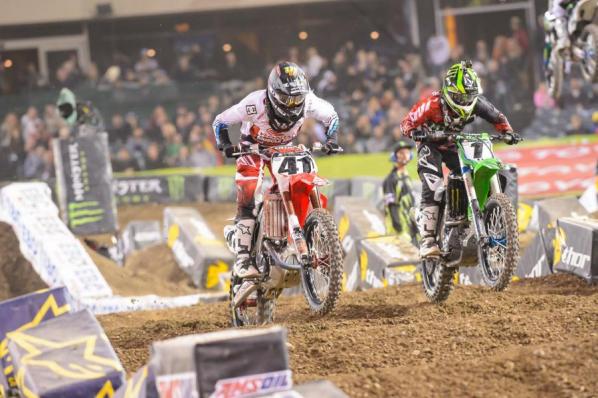 Then the champ went after Canard for the lead, and got him. 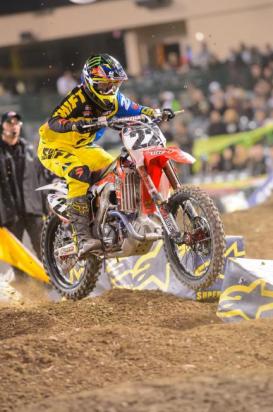 Reed came out third after a race-long battle with Millsaps. Millsaps went down and Reed took the spot.
Simon Cudby photos

Millsaps ran third most of the way, in a big battle with Reed. At one point Reed, who looked much more aggressive tonight compared to the first two rounds, made a pass, but Millsaps got him back. Then Reed made a mistake and Millsaps got away, until he tipped over by himself near the start straight. Reed rode by for third, and Millsaps had enough of a lead over everyone else to hold onto fourth, and also hold onto the points lead for the third week.

At one point, Yoshimura Suzuki’s James Stewart was in the pack along with Villopoto and Reed, but he ended up tipping over in a corner, relegating him to 12th, right behind Dodge/Sycuan RCH Suzuki’s Broc Tickle.

The 250 SX class presented the battle we’ve been waiting for, as Lucas Oil Troy Lee Honda’s Cole Seely grabbed the holeshot over Red Bull KTM’s Ken Roczen and GEICO Honda’s Eli Tomac. The three favorites in the Western Region then went at it in a spectacular battle, with Roczen hounding Seely for the lead, and Tomac showing Roczen a wheel from third. Then Roczen made a mistake, and Tomac blasted past for second. About 10 laps in, Tomac then got next to Seely and nearly made the move, but Seely held him off momentarily, before Tomac tried again and made it stick. Seely spent another lap on Tomac’s rear wheel, but then dropped his pace, allowing Tomac to get away and Roczen to make the move for second. By then, Tomac had begun to pull away, and he brought it home for his third win in three races this year. Roczen and Seely finished up on the podium, with GEICO Honda’s Zach Osborne coming from way back to fourth, and MotoConcepts’ Jake Canada taking 5th. 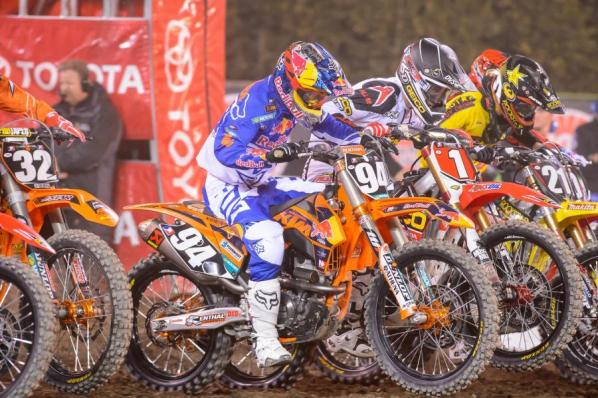 Roczen and Tomac battle off the start. 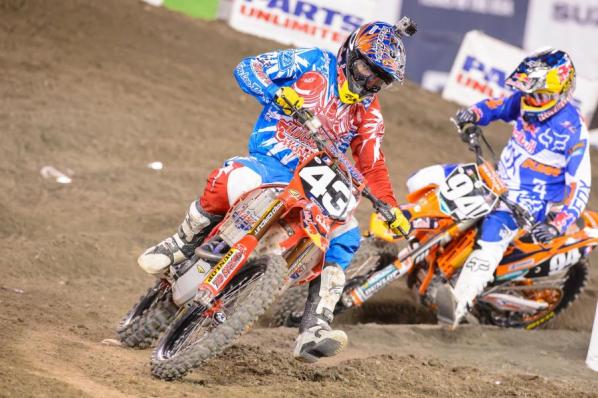 Cole Seely (43) led a large portion of the main. 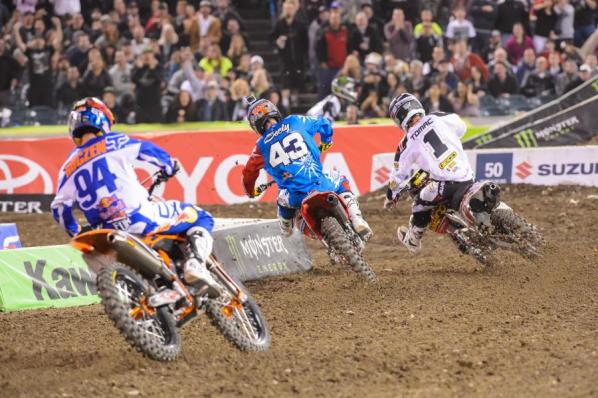 The battle up front was this good. 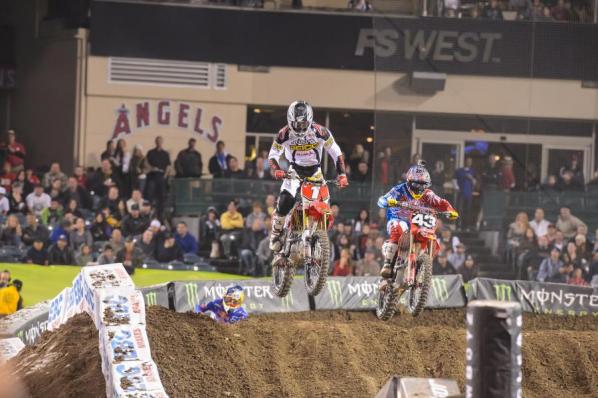 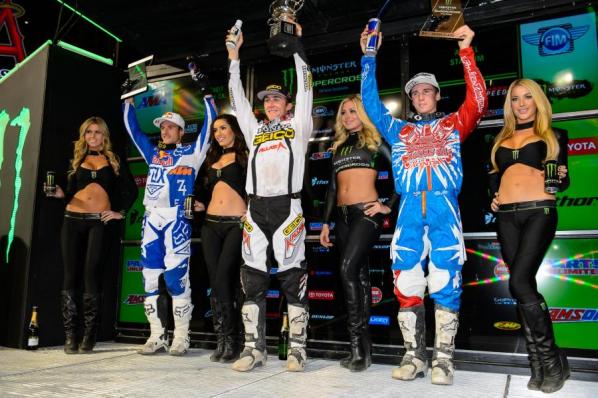 The night actually began on a sad note when GEICO Honda’s Kevin Windham suddenly decided to announce his retirement after 19 professional seasons. Windham, who crashed out of last season’s racing after a big get off in Houston, and then knocked himself out in a crash at the Monster Energy Cup, had been hinting about this since round one. Repeating several times that he was worried about hitting the ground, he finally decided enough was enough, and he came out to opening ceremonies to salute the fans. After a few transfer jumps and his trademark stoppie, he did a victory lap and soaked it in. Windham will still be hitting the races this season to meet and greet the fans, though, but he’ll be missed out on the track. It’s been a great ride, K-Dub!