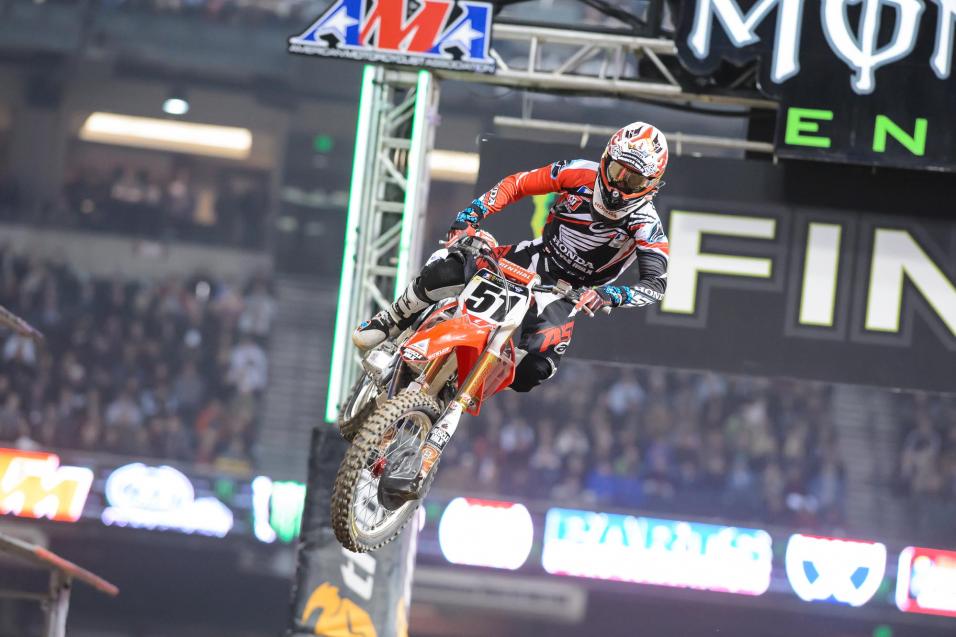 By all accounts, considering it was his first-ever 450 race in Monster Energy Supercross, Justin Barcia had a good Anaheim 1. He won a heat race, and ran third for most of the main event before a quick tumble sent him back. And yet, most in his camp said he had much more than he showed at the opener, as nerves slowed him a bit at Anaheim.

At round two in Phoenix, nothing slowed him at all.

You knew Barcia would be a contender once he topped the first 450 practice session, since he usually only does so-so in practice and then gets faster once the races begin. Indeed he did, winning his heat race by a big margin, and then grabbing the Nuclear Cowboys holeshot in the main event and and checking out immediately. There were really no challengers for the Muscle Milk Honda rider, who led every lap at Chase Field to take his first-ever 450 victory (and in just his second try). Make that two different winners this year (last week's winner was Davi Millsaps), with neither coming from the much-hyped foursome of previous supercross champions.

Behind Barcia, a battle raged. Defending two-time champion Ryan Villopoto (Monster Energy Kawasaki) spun out and crashed while running fourth on the second lap, leaving last week's winner Millsaps (Rockstar Energy Racing) and Chad Reed (TwoTwo Motorsports Honda) to battle for second and third. Eventually Barcia's Muscle Milk Honda teammate Trey Canard arrived on the scene to make a three-rider battle, and Villopoto recovered to join the fight, too. The four of them raced hard but smart, as they were in no position to make a run at the fleeing Barcia. 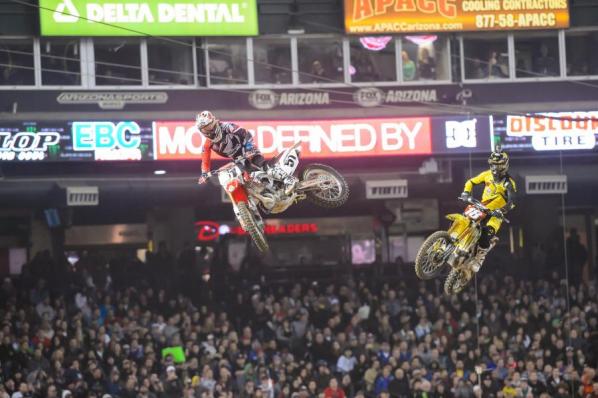 Barcia and Millsaps led off the start, but Barcia was on the gas and started opening up a lead quickly. 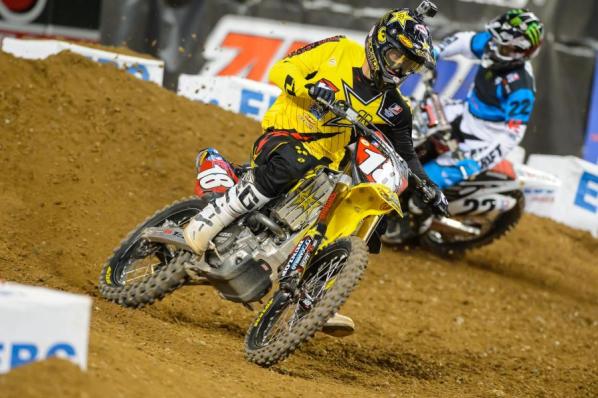 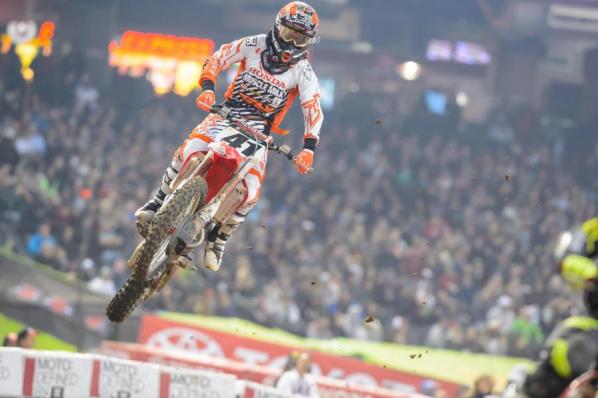 Villopoto fell, and eventually Canard passed Reed and Millsaps to get to second. Then he fell on the last lap, and Villopoto took second. 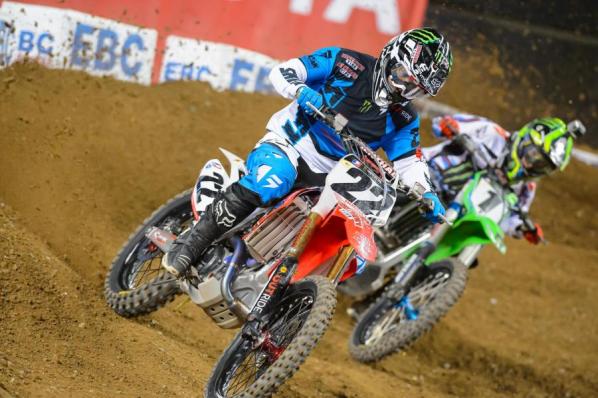 The racing is awesome and close early in the season, and we love having photos like this to run. 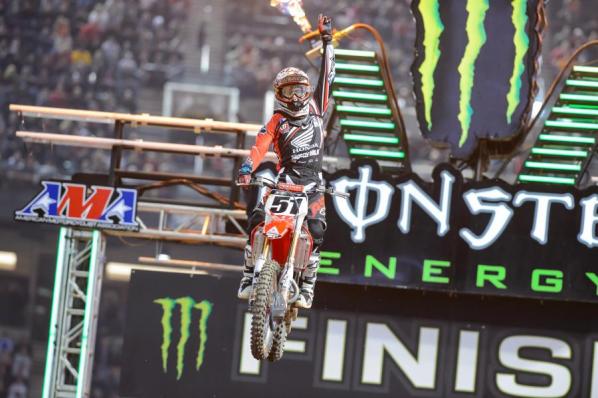 About the only spot that wasn't hotly contested was this one: Barcia won big.
Cudby photos

At one point Villopoto caught Canard for fourth, but then Canard sliced inside of Reed to take third. Villopoto then passed Reed, too. Then Canard got Millsaps for second, and eventually Villopoto followed suit. On the last lap, Canard held a slight advantage over Villopoto, as the two had exchanged different fast laps. But then Canard bobbled in a rhythm lane and crashed with a half lap to go—costing him three spots with Villopoto, Millsaps and Reed getting around him. This also allowed Millsaps to re-wrestle the points lead back from Canard, and made the final top three read Barcia, Villopoto and Millsaps. Reed was fourth and Canard fifth.

Expected title contenders Stewart and Dungey didn't have their best days. Stewart was still dealing with a knee injury suffered last week, but he was fastest in qualifying and won his heat race. It was very cold all day and night in Phoenix, and Stewart admitted to us after the race that the cold had an effect on him. Dungey crashed on the first lap of his heat race and missed the qualifying cut, sending him to the LCQ where he got another bad start and finished second to Jimmy Albertson. A bad start in the main set Dungey back again, and he was able to claw from about 16th to eighth.

In the 250 SX class, there's less drama, as GEICO Honda's Eli Tomac is proving to be a level above the competition so far. The defending West Region SX Champion didn't get a great start in the main, but was able to work his way forward to his second-straight win.

Monster Energy Pro Circuit Kawasaki's Martin Davalos started the night with a huge, huge crash in his heat race, but bounced back to win the LCQ and then grab the early lead in the main event despite the terrible gate pick. But Tomac was on the move, starting about top five and then working up to second. He then carved into Davalos' lead, took it and checked out. Red Bull KTM's Ken Roczen then managed to catch Davalos with two laps to go, and they collided at one point, and then on the final lap Roczen was able to make the move and steal second. Davalos, banged up from his big crash earlier, held on for third. Cole Seely (Lucas Oil Troy Lee Honda) and his rookie teammate Jessy Nelson rounded out the top five. 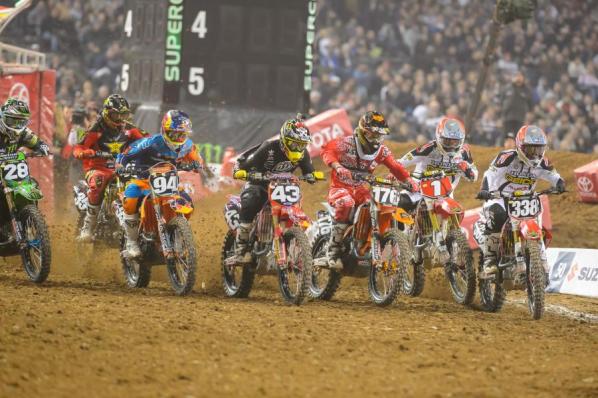 Tomac (1) got buried off the start but that inside gate selection helped him slice into the top five. 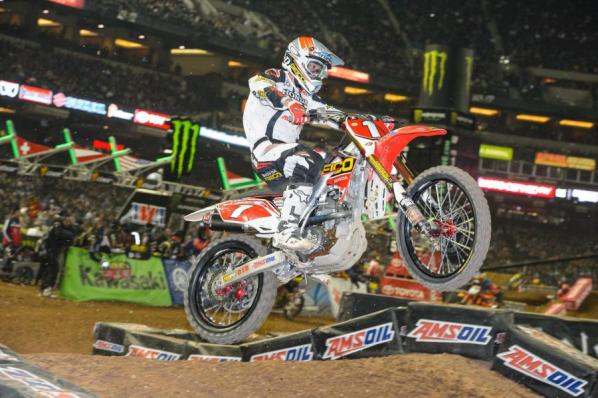 Tomac eventually caught and passed race leader Davalos, and it was over from there. 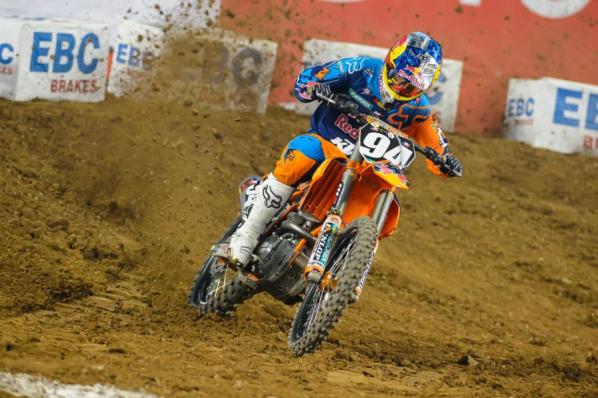 Roczen started even worse than Tomac but came through for second. 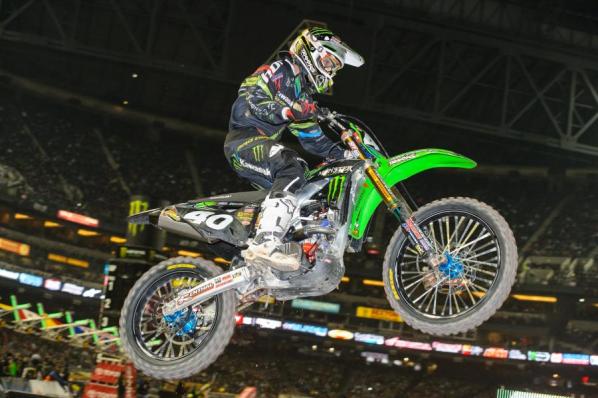 Davalos had a long night--big heat race crash and an LCQ win. But he managed to dig out a podium finish.
Cudby photos

After drawing 50,000 fans in Phoenix, Monster Energy Supercross next heads to Angel Stadium in Anaheim, California, again next weekend for round three.