January 7, 2013 2:55pm
by: Jason Weigandt
Angel Stadium Anaheim, CA Anaheim 1 (A1) Monster Energy AMA Supercross Championship
The dude who gets a ton of press and attention is the Unsung Hero? Hear us out.

James Stewart has been through the roller coaster of ups and downs, but this was a new one: he hurt his knee in practice at the opener (just after setting the fastest lap of the afternoon) and put his whole season in doubt before the season had actually began.

His Yoshimura Suzuki Team Manager Mike Webb explained that James simply dabbed his foot coming out of the turn that cuts across the start straight, the same thing you could do 1000 times and not get hurt, but this one particular dab did it. That's how knee injuries usually go. From there, Stewart's status for the night was up in the air, and if he missed the race, his championship hopes would already be pretty much finished. Sure, he came from a DNF at A1 to win the title in 2009, but having to overcome a points deficit and a knee injury at the same time is a different story.

So he had to try, and he did. He even got a start in his heat race and rode decent for a few laps before eventually dropping back to third. In the main, he gutted it out again, riding well within himself for a steady eighth-place finish. 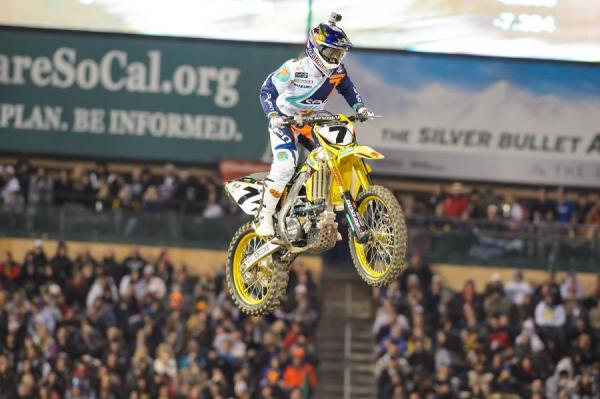 Stewart may have salvaged his season at Anaheim with an 8th place finish.
Simon Cudby photo

“It wasn't even a matter of James being able to suck it up and deal with the pain,” said Webb. “He's tough. He can ride through pain and injury, he's done it before. It's more a matter of, is it just going too get so bad that we need to just call it a year, get it fixed and come back for outdoors?”

An MRI will tell that story soon. But assuming Stewart is able to stay in this Monster Energy Supercross Championship, his eighth-place finish will loom large. Before the race, it looked like Stewart could have missed the race and scored zero points. Instead, he leaves a few points ahead of defending champion Ryan Villopoto, and not that far back of rivals like Chad Reed and Ryan Dungey. It was the definition of a salvage ride.

Stewart is known as Mr. Win or Crash, but this time he scored something well between that with an eighth. But that eighth could be as critical as any finish he's ever had.

Honorable Mention: In the 250SX Class, Zach Osborne looked good all day on his GEICO Honda, qualifying third. But he got jacked at the start in the main and entered turn one in last place. A few riders were down early, allowing him to pick up a few spots, but from there it was just a head-down charge through the pack to score as many points as possible. He got to seventh, more than enough to keep him in the hunt heading into round two.