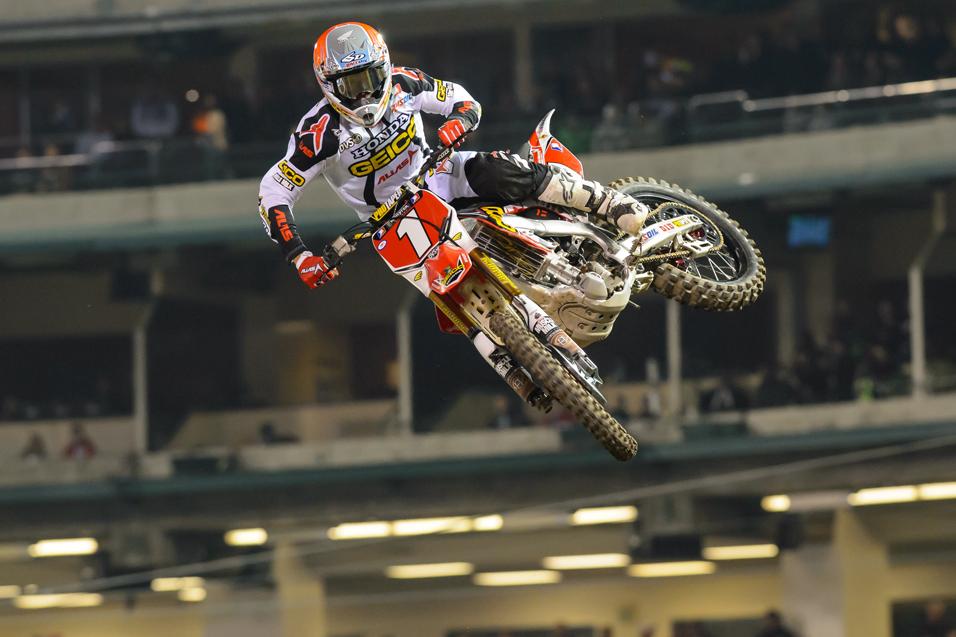 Anyone who made a prediction on who would win the 450SX main event probably ended up looking dumb when Davi Millsaps scored a surprise victory at Anaheim. But at least most of the 250SX prognosticators were correct—many expected a dominant win from defending 250SX West Champion Eli Tomac, and that's exactly what happened. The GEICO Honda rider was pumped up after the race—even though he's stuck on that little 250.

Racer X: A lot of guys come into Anaheim 1 just trying to see where they are. But you did so well in this class last year and you did so well on the 450 recently, at this point I feel like if you only got a decent finish here, it’s not going to be good. So, what are your expectations at this point?
Eli Tomac: I really wanted the W here. Just because I haven’t gotten a W here in my past two years. Anaheim 1 is one of the most hyped-up races. It just feels good. And then to start off that way with the points is really important, also.

How long have you been back on the 250?
I hopped on my 250 at the beginning of December.

That’s it? You held onto that 450 all the way until December?
I was at my house in Colorado on the 450 until about Thanksgiving and then we cruised out here and I hopped on my 250 and then moaned and cried for about a week and then I finally got used to her. So now we’re good. 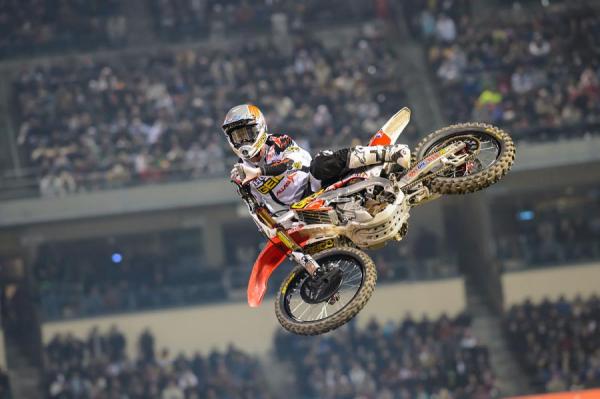 But was there testing involved? That’s really not a lot of time.
There was testing, but we didn’t really change a whole lot this season. Right now our chassis is super dialed and it worked last year too so I didn’t really switch up a whole lot.

Off the start in the main, there was carnage everywhere. And you came out with the lead. Did you manage to dodge it?
Yeah, I saw the carnage of the crash off to my right, in my peripheral vision there. But I was far enough inside where I was all right. I just heard the oos and ahs and saw a guy eating it, so I was like, 'oh crap.' But it was definitely a better start than that heat race. But I was also in a safer spot, too. I was kind of rolling the dice out there.

You went extreme inside?
I was very inside in the main, yeah.

And you didn’t do that in the heat? It was a different spot?
No, for the heat it was like two outside the gate. Because I saw [Jessy] Nelson actually holeshot there in the first heat and I was like, 'Hey, why not take the holeshot gate?' But it didn’t work for me in my heat! 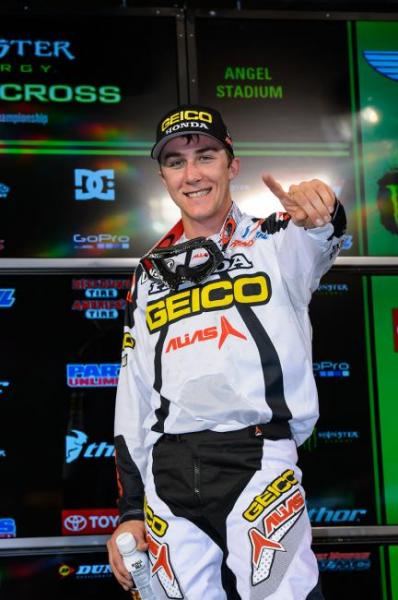 It was a dominant performance for Tomac at Anaheim. He will retain the #1 plate for Phoenix next week.
Simon Cudby photo

The starts are the one thing you did have problems with consistently last year. Are there things you’ve changed to try to remedy that?
I’ve tried to change a couple techniques and stuff, get my body through at the right time. And really in that heat race I spun on the plastic. That’s what made me hook up and then do a big wheelie. It was just one of those things.

After you had the lead in the main, you just set your own pace?
Yeah, once I got in the lead I just kind of set my own pace and had a good flow. I was able to do that quad over there for a quite a few laps. I just felt pretty dialed.

This track actually looked like it was pretty cool.
It was definitely way better than last year’s Anaheim 1. And the finish, too, was good. But it just had a good flow. It was a good track. I'm looking forward to more.