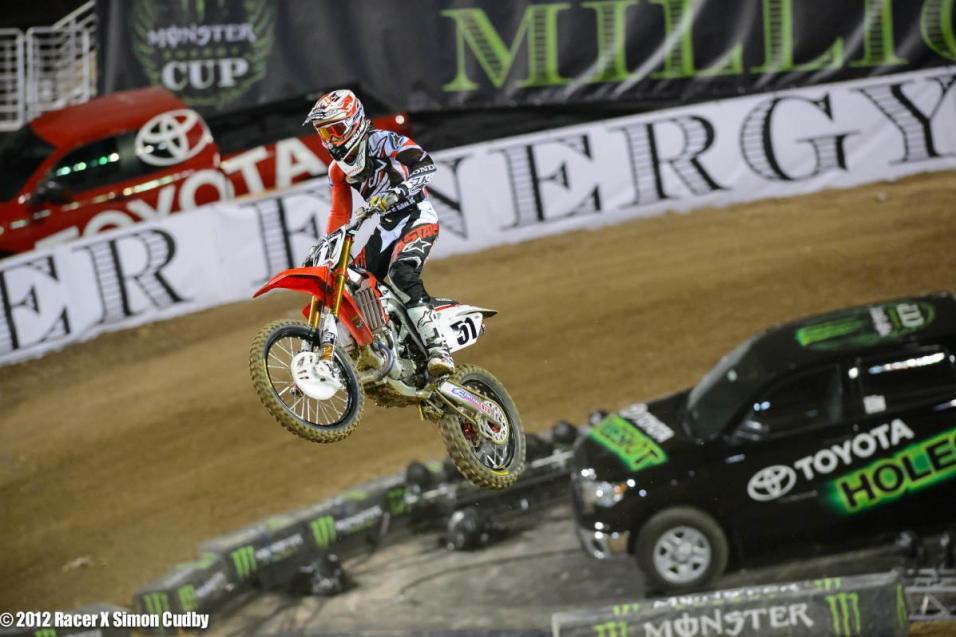 They held a press conference before last year's Monster Energy Cup--but it didn't stoke the bench-racing flames. Ryan Dungey had just announced he was going to compete, but didn't make it to the presser. Chad Reed opted out of the race, James Stewart was in between teams, Trey Canard was hurt. And no major Lites riders were ready to step up. Justin Brayton, Kevin Windham, Mike Alessi and Marvin Musquin were trotted out for the presser along with new Monster Energy SX Champion Ryan Villopoto. You think Vegas had a tough time picking a winner from that group?

Big difference with this year's show. This time Dungey was there, but with less mystery and more momentum. Reed was there. Justin Barcia was there to talk about moving up with two Lites SX Titles to his credit. And Villopoto commented on the comeback trail from injury, which will add a degree of difficulty to his quest to repeat.

With Villopoto and Reed so far removed from their last races, and Barcia a significant wild card (not to mention his 2012 season teammate Eli Tomac, who was not at the press conference but could be a factor, as well as others like Kevin Windham and Mike Alessi), there's much more of a "no one knows what to expect" quality from this year's race, even if it's the second year for this event. It's so unknown, even the riders don't know where they stand.

"Last year was the continuation of a great season, but now it's more like a see where you're at kind of race," said Vilopoto.

"I'd love to sit here and say I'm going for the (Monster) Million, but I'm really just here to race," said Reed. "I haven't raced in so long. I'm just trying to get my feet wet and learn about the new bike, and I haven't ridden it on a supercross track against these guys."

Even Dungey, who should be the most sure-fire hit of the event considering he's been healthy (and winning races) for the large part of the last six months, couldn't commit to anything {as is usually the case). "I always come into races expecting to win," said Dungey. "Even last year, just having two weeks on the bike, that was the goal. Maybe that was over the top, but the approach this year is the same." 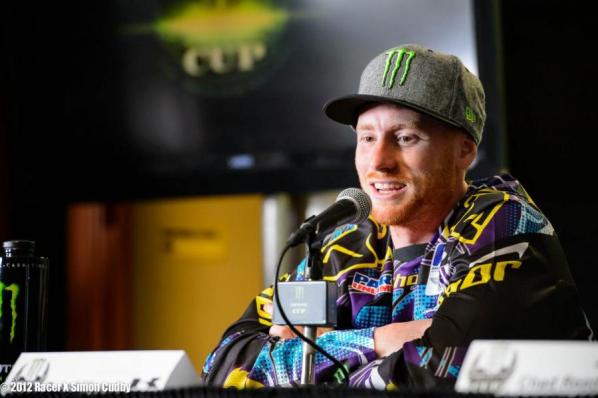 All reports say Villopoto is flying on the test track, but even he knows there's a certain sense of unknown in his first race back.
Simon Cudby photo

Barcia, never one to show intimidation, didn't mention trying to see where he could fit in. He simply said he was excited to race riders he has never raced before. And it showed when the crew rolled out for some laps, and Barcia immediately started pushing his Muscle Milk Honda 450 to the limit. Everyone else seemed to be feeling things out, but Barcia was going for it. A few laps later, Villopoto started pressing the issue, and looked plenty fast, too.

But it's pretty clear that while last year's Monster Million was Villopoto's to lose, no one is sure at all who will win in 2012. And that's the best change of all.