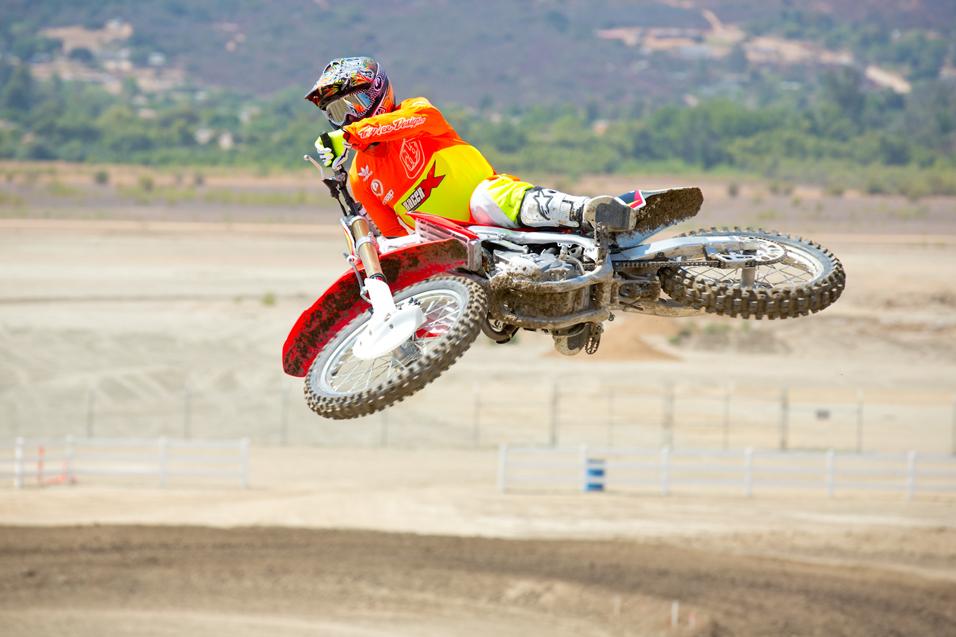 I'll be short and sweet. Why the heck can we get a national anywhere near Georgia or at least the southeast? We pack it out in supercross consistently and I could imagine if there was a national around these neck of the woods we'd have a full blown moto-Talledega on our hands; Plenty of rich rednecks to buy up all the merch and beer. Talk to your boss and let's get the ball rolling!!! Plus, a lot of the riders are holed up in Florida anyhow. So, logistically, I'm sure that would be a plus too. Just imagine all the fun you west coasters / media will have making fun of us crazy rednecks and our accents. There is sure to be plenty of those helmets that hold two beers on each side and plenty of fans to make fun of when they wear their moto jerseys to the race. We're sitting on a gold mine here DC.. Wake up and smell the PBR!

Love your column and I can't believe you let Carlisle beat you in "supercross: The movie".. I was gonna go buy a Nami 450 that sometimes sounded like a four-stroke then switched over to a two-stroke mid-air. That sum bitch must be using one awesome flux capacitor unit. Thank God it never busted 80 miles an hour. Hahaha

PS. How come u never make fun of Wilson for saying peeuuwp anymore? Has that ship sailed? Just wondering

You even have a redneck nickname. Awesome. I’m not sure what’s going on with the schedule for upcoming years but I do know that DC has made multiple visits down to different tracks in the southeast in an effort to take the series back down there. It’s been a long time since Gainesville was on the schedule and when you guys have to travel all the way to Pennsylvania to see a National something is off. I wish I could tell you more but all I know is that it is being pursued. And don’t think for one minute I haven’t imagined all the homemade race trucks, campsites and outfits that a National in Alabama would provide. It would be pure gold for photos and bench racing sessions for the weeks following. I wouldn’t miss it.

The Peeuuwp ship has sailed, by the way. But I’m sure Deano’s Scottish/Canadian/SoCal accent will offer up more gems soon.

I am a little fuzzy on how the AMA selects rider numbers for the season.... Riders who earned career numbers choose whatever number they want, but it has to be 1 or 2 digits, is this correct? (with exceptions for riders who chose their numbers before that rule was put in place, eg. Alessi, Hansen, etc....) As for everyone else, they are assigned numbers based on what they earned, but how exactly do they decide that? What about all the 3 digit riders? Do they just pick whatever number is available?

And lastly, I've noticed there is no one running the number 4, 6, 8, or 13.... to my knowledge, no one has any of these as a career number. Is the number 4 being left alone out of respect for The GOAT? I assume 13 is out because of superstition.

The process has changed multiple times over the years and continues to evolve as the AMA comes up with new ways to confuse fans. I’ll have to verify this but I think the current process for selecting a number goes like this: riders who make the top 100 in points are assigned a number based on their ranking in total points from 450 SX, and either 250 or 450 MX. The riders who win championships or are super-cool and have factory rides or send in a lot of emails to the AMA office get to pick a permanent number. I’ve never sat in on one of those selection meetings but from what I understand it is similar to a shell game and you end up having the number the AMA wants you to have or getting beat up by “muscle” overseeing the process if you get loud. Nobody picks 13 because, obviously, that number is somehow cursed and you will certainly die if you ever ride with that number affixed to your motorcycle. The four is being held for a couple years out of respect for RC and I don’t think many people have a problem with that. Some guys shy away from six because you end up having three sixes on your bike [I’ll take sacrilege for $300, Alex] and eight was left on the table by Grant Langston and it will probably get picked up soon.

The three digit mutants get to squabble over whatever numbers are left like back alley bums fighting over the day old bread thrown out by Subway’s sandwich artists at closing time. From what I understand the AMA elitists running tech inspection at pro racing events will fail any three-digit rider who makes eye contact with them as they pass through the inspection line. True story.

I’m fine with this whole process, forbidden eye contact and all, so long as the number 101 remains unused here on US soil. Foreign visitors, you’ve been warned.

I'm sure the top racer's mechanics get the itch to ride just like we all do.  And I am willing to bet that some of them are quite fast on a dirt bike.  How good are they?  For example, if you were to take the top twenty riders in points in either supercross or motocross and put their mechanics on the line at a national event…who would win?  I am sure you have ridden with at least a few of them.  Also, just a side note, would their ride be primo like the pros bikes they work on or would it be "beat to crap" just like the typical auto mechanic's car that barely runs?  You know, "I work on them all day long and I'm not about to work on mine as well!"

I really enjoy reading your comments!

This is an easy one: The man known as The Swedish Miracle. Chad Reed’s wrench, Lars Lindstrom, is probably fast enough to qualify for a National right now if he really wanted to. His dad, AMA Hall of Famer Gunnar, worked for Husqvarna as a test rider in Sweden and was eventually moved to R&D. He came to the US when Husky started making a push here in the late 1960’s and was put in charge of engineering. He was also still racing and won the Hangtown opener in 1972 on a Husqvarna 250 and went on to finish third in the series that year.

Lars has been at Honda for many years now working on test projects, dirt track projects for Nicky Hayden and Supermoto bikes for Ben Bostrom. He also spent some time working with McGrath when he would go racing and then he spent some time wrenching for Kevin Windham. He was picked up by Chad Reed and his TwoTwo Motorsports team and he obviously has had some time to spend on the bike recently because he is flying. I raced with him at Mammoth a couple months ago and he’s no slouch. He’s the quickest mechanic and teamed with his rider they would be the fastest rider/mechanic duo in the paddock. Hands down.