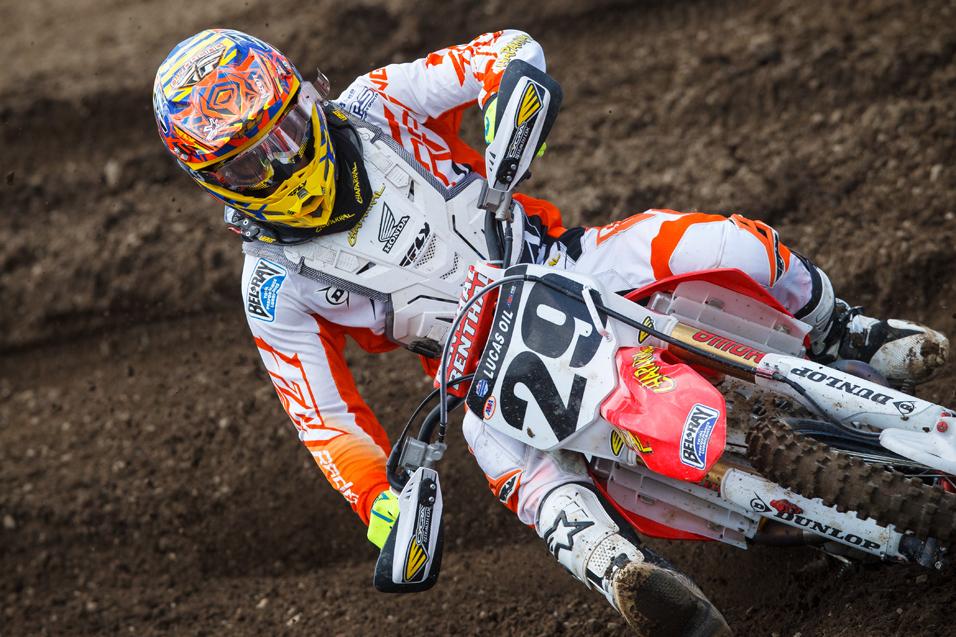 The Breakdown Ruts at Unadilla

Unadilla looked to be the toughest track this year. Rain before the race made for deep, long ruts everywhere. The track looked like real motocross and was very challenging for all riders. I will explain why some riders performed well in these conditions and why some riders struggled.

MARVIN MUSQUIN
From the first lap of practice, Marvin must have had a smile on his face. The conditions at Unadilla suited Marvin's riding style perfectly. Marvin is a very smooth and technical rider. The ruts were so deep and long, he really had to have patience, because if he pushed too hard, he could have made a mistake and ended up on his head. With so many different lines to choose from, he really had to start thinking ahead and planning which rut he would take. Marvin won his first National because he uses his brain when he rides. Not only does Marvin try to twist the throttle hard, he also is planning and thinking about his next move on the bike. This first photo of Marvin shows him doing everything correctly. You can see his head looking up to see the next line he will take. He is in a forward/attack position on the bike. His head is just over the crossbar pad. His ankles, knees, and legs are tight against the bike to keep it going in a straight line. 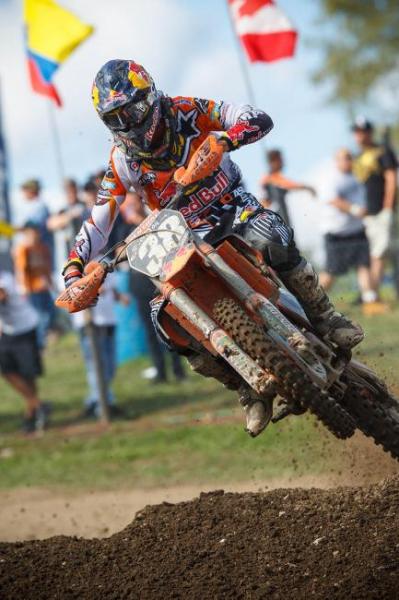 This next photo helps us understand why Marvin did so well while some other riders didn't. Marvin made little mistakes when other riders where making big mistakes. In this photo Marvin is sitting on the edge of his seat and not laying the bike over. In a good rut, your butt should be centered on the seat and your body should be square with the bike. Marvin is still in the rut and moving forward, so this is just a minor mistake for such a difficult track. 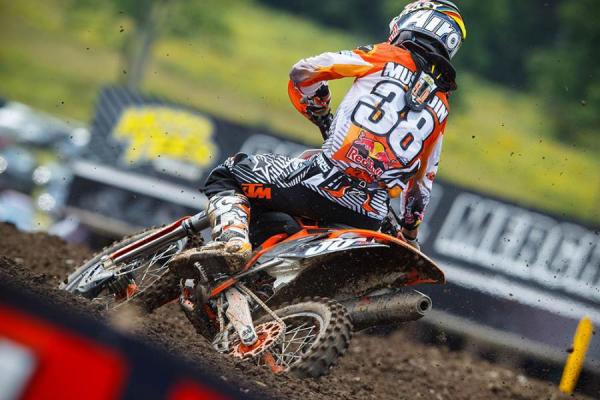 DAVI MILLSAPS
Davi was another rider who performed well at Unadilla. Davi's riding style is like Marvin's in many ways. Davi is patient, smooth, and methodical. Davi is just coming off an injury and still got fourth overall! In the photo Davi is doing the most important things correctly. His head is over the handlebars, his head is up, looking to see where he needs to go, he is sitting toward the front of the seat, and he is twisting the throttle. I really like how tight he is keeping his legs and knees against the bike. This is helpful if you don't like having knee replacements or metal screws in your ankles! Notice how Davi's outside foot is placed on the peg. It is close to the frame, so no ruts will grab it. He is also on the ball of his foot, so no ruts will catch his toes and wrap them under the foot peg. That's why it is super important to be on the balls of your feet when your tires are on the ground. Davi's right elbow is down, but no one is perfect. 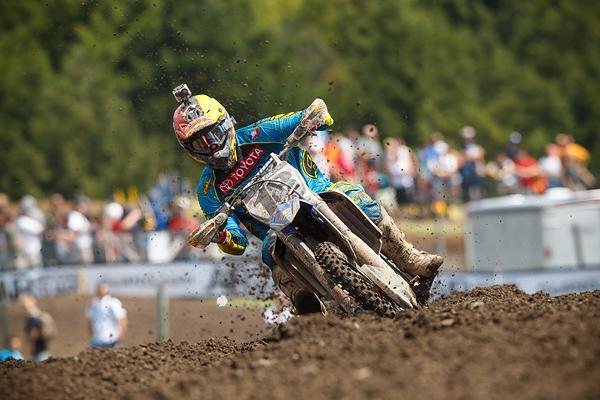 JAMES STEWART
James Stewart ended up 15th overall at Unadilla. This photo sums up James's year. At least now we can all agree the Yamaha was not the problem. James won Hangtown and Freestone because he didn't have time to mess up the Suzuki. He switched teams right before the Nationals started and probably didn't have time to do a lot of testing. As the season goes on, he does more testing and makes the bike worse. I thought his bike looked good at Hangtown and Freestone. Now the bike is low in the back and just kicking him all over the track. His lack of knowledge when testing is not his only problem.

Davi Millsaps, Marvin Musquin, Ryan Dungey, and Andrew Short are methodical riders. These riders are thinking and planning about what needs to be done while they are riding. They will make a mistake one lap, realize what the mistake was and fix it the next lap. I would not put James Stewart in this category. James thinks about two things: Winning and Going Fast. I admire James for going really fast on a motorcycle and accomplishing what he has done. However, he could accomplish so much more if he would focus on planning ahead and concentrate on what he is doing.

As for the photo, I would bet three of his cars that he wasn't focused on where his feet should be, and his balance was a little off. His right foot caught the rut and ripped it off the foot peg. He then had to throw out the left leg to maintain some sort of balance. 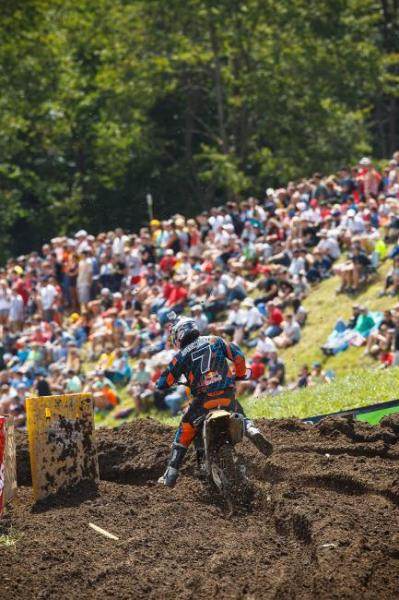 ZACH BELL
Zach Bell was 14th overall at Unadilla. I have been watching Bell for two years. I started watching him because he reminded me of James Stewart. He is like James in two ways: Zach goes really fast and crashes really hard. In this photo you can see the intensity in his riding position. He is twisting the throttle so hard, it looks like his right forearm is going to pop. I'm no detective, but by the rolled up sleeve, dirt on his right knee, and the hand guard pointed towards heaven, I would guess he has already spent some time on the ground. Like James, Zach needs to focus on how to ride the bike and pay attention to what he is doing on the track. You can have a rider with all the speed in the world, but if he lacks focus, he will struggle to stay on two wheels. 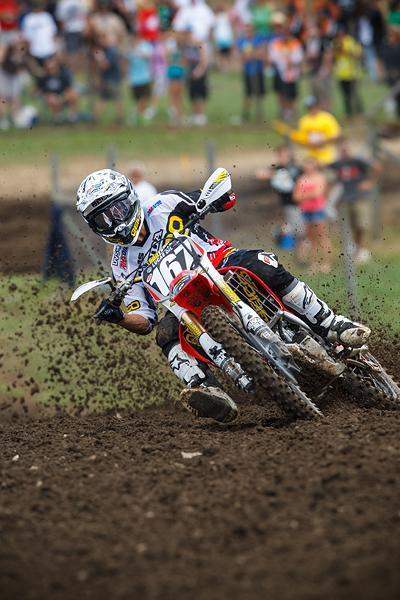 MALCOLM STEWART
I would put Malcolm in the same category with his brother and Zach Bell. Malcolm has tons of natural talent, but needs to focus on making fewer mistakes and being smoother on the bike. Malcolm got sixth overall at Southwick. Southwick is a track where you can make many mistakes and still go fast. The sand gives way, acting like a cushion, so you don't have to be as precise as you would in a rut. Sand conceals sloppy riding. Unadilla was the exact opposite of Southwick. Unadilla had deep, tacky ruts that did not move or give way. Malcolm was 13th overall at Unadilla. 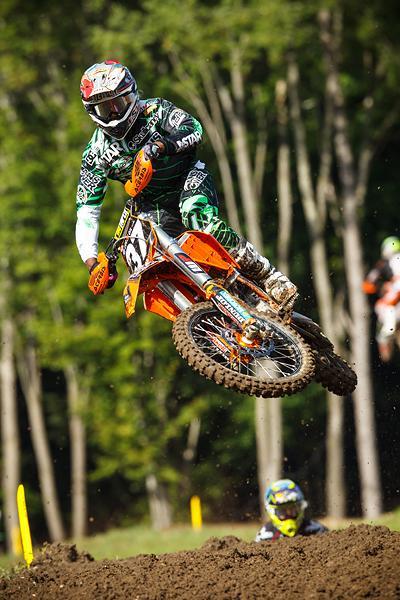 RYAN DUNGEY
Ryan produces good photos in every turn and every jump all year long. By being consistent and focused all the time, Dungey's biggest problem is hiding his money from the government. All young riders should watch and try to look like Ryan. Let me try to name the many things he is doing correctly. His head is turned slightly to the right, so he can see the exit of the turn. This helps the bike to lay over and stay in the rut. His butt is forward on the seat closer to the gas tank. This helps keep the bike balanced and level through the turn, so he can maintain traction and really begin to twist the throttle. His right leg is off the ground, tight against the bike and straight out. He is on the ball of his left foot, so he can apply pressure to help keep him forward on the seat and help him maintain tire traction through the turn. Notice the number 5 on his jersey and how the number is the same angle as the bike. That is how you should look when you lay the bike over in a rutted turn. 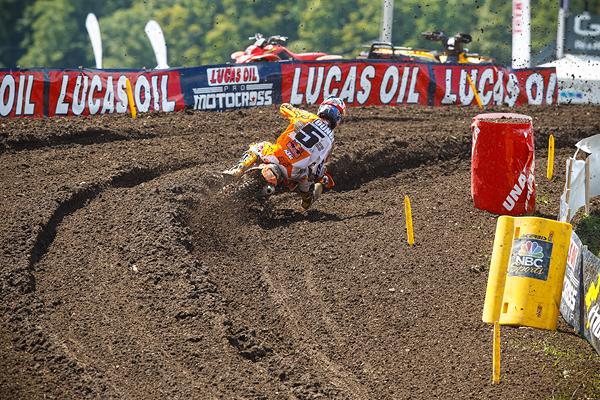 ANDREW SHORT
Andrew, like all these riders, is concerned about going fast, but he is also concerned about riding the bike the right way. This is a very good photo of Andrew. Andrew is doing all the important things correctly, just like Dungey. Andrew's right elbow even looks good. Notice the dirt flying just behind his rear tire. This is very important because for the bike to track straight through the rut, you must be on the gas. That's why throttle control is important on a four-stroke. You must get on the gas at the BEGINNING OF THE TURN, not the apex of the turn, and stay on the gas all the way through the turn. Four-strokes turn when you twist the throttle. Andrew was third overall at Unadilla, so he did well there. One of my best students is former Jet Ski World Champion, Brandon Greene. A jet ski is controlled by the throttle just like a dirt bike. Brandon has made quick progress because he has learned throttle control from years racing a jet ski. 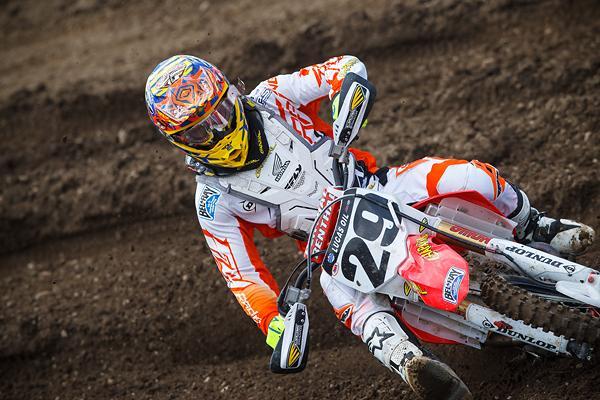 Hopefully now we can see the pattern of results for Unadilla. When you have a rutty nasty track like Unadilla, you can do so much better if you are a methodical rider.

Some people might think I was hard on the James and Malcolm Stewart, and Zach Bell. But I think these riders have tons of talent, and I just want to see each rider perform to his fullest potential. I feel like I did not perform to my fullest potential when I was racing, and I would like to help riders avoid the same mistakes I made. If these riders focus on what I said, they will have better results and a longer career. If you would like more detailed instruction, you can contact me at Travisprestonmx.com.