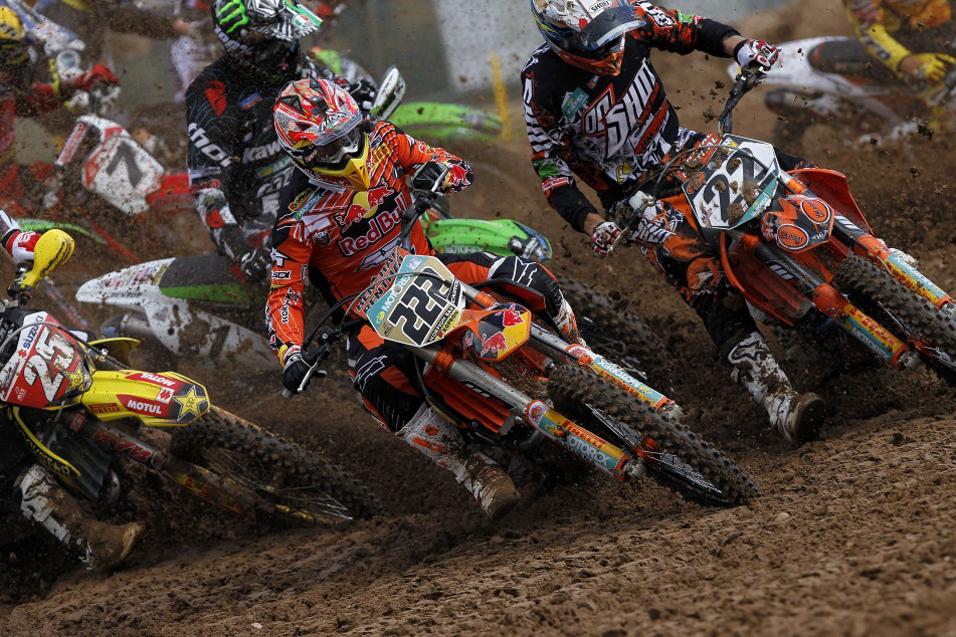 For the second Grand Prix in succession there was heartbreak and some extraordinary scenes. The kind that top-flight motorsport is fully capable of but rarely seems to produce. Unsurprisingly the black and bounteous clouds that are following the FIM Motocross World Championship this year drifted east and to the impressive Kegums facility in Latvia. The torrential rain showers on Sunday helped transform hard-packed and slippery sand on Saturday into another collection of puddles and a depth of shifting square-edged bumps that wasn’t thought possible twenty-four hours earlier.

What to gather from this tenth round of sixteen? The surface provided the narrowest of margins between success and failure and between machine longevity and smoking carcases of metal. Someone like HM Plant KTM UK’s Kevin Strijbos was able to notch his first MX1 race win since 2007 while the likes of Gautier Paulin (sixth) and Christophe Pourcel (eleventh) paid full respect to the perils of attacking the terrain. There were ‘nearly moments’ everywhere. The closest of which was the centimetres that Paulin missed squashing a crashed and prone Cairoli on the landing to a tabletop that would have been horrific. The champion later said he was “scared” when he thought about the incident again. 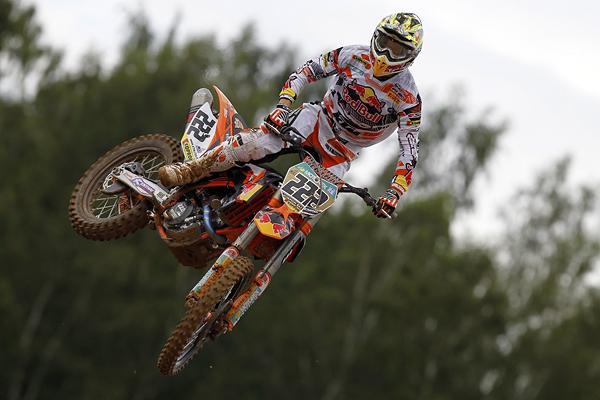 Cairoli reclamied the points lead with a win in Latvia.
Ray Archer photo

Cairoli gained the headlines once more, this time for an aggressive approach to a venue at which he had won two of the three editions run thus far. His determination to make up for lady luck’s wrongdoing in Sweden two weeks ago was evident and a run to 1-2 (the aforementioned spill in the second moto dropped him into a four rider battle from which he emerged successful) was the foundation for his fifth win of 2012 and resumption of duties as the safe keeper of the red plate. Suzuki’s Clement Desalle was the brief holder of the crimson background but three crashes across the two 35 minute and 2 lap motos and sixth position overall did not signify the Belgian’s best weekend of the year, even if he was a bit under the weather.

MX1 was a KTM 1-2-3 and the category provided Belgium with two of what would be four slots from all six podium spaces; a prolific haul unmatched for a number of years. Ken de Dycker made his factory KTM baptism with second and was one of the braver souls on the dirt while Strijbos erased a poor tenth place in the first moto with his deft handling of the second. De Dycker hadn’t made the box since 2010 and Strijbos was celebrating his third trophy of 2012 as a privateer. Rui Goncalves produced his best performance of the season on the factory CRF450R for Honda World Motocross and knocked back rumors of a contract racing endure in 2013 with a good line, “I’m not ready to change my own tyres just yet,” the Portuguese rider said. 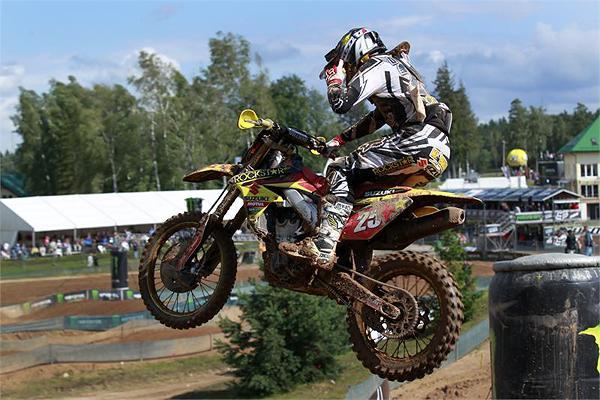 Clement Desalle would struggle to a sixth overall.
Suzuki photo

MX2 provided a cascade of emotion. Floride Monster Energy Pro Circuit Kawasaki’s Joel Roelants ran out an overall winner for the first time in his career and only six races before he moves into the MX1 class having reached the 23-year- oldceiling of the category. In one half of the Kawasaki awning the Belgian was floating but in the other half Tommy Searle had to be picked up from the floor. The title chase on the 250s took a major twist, and then twisted back as an engine problem and tyre fault gave the luckless Brit a 0-0 scorecard.

Red Bull KTM’s Jeffrey Herlings was set for a podium finish and a points haul that would have stretch out a massive gap of 60 at this stage in the season but while Searle was demoralized to the point of retiring in the second moto far behind the field, Herlings’ KTM also found fault and stopped with three laps to go. Searle will be kicking himself that he did not continue after a pit stop to replace the rear wheel as his Dutch rival still obtained three points as a series of crashes and breakdowns (Zach Osborne one of the fallers but was uninjured apart from a sore neck) meant just seventeen bikes made the finish line. 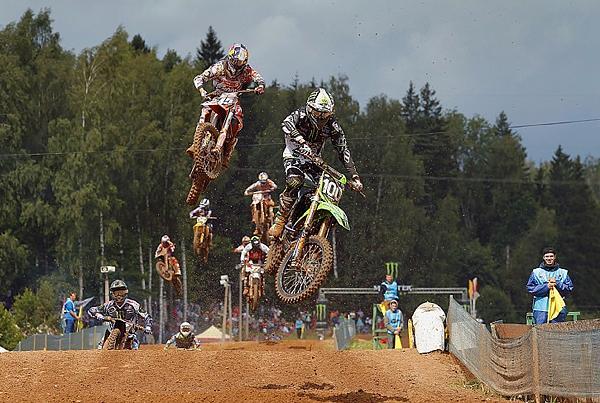 As Roelants and Jeremy Van Horebeek (the KTM rider now not so far adrift in the rush for the title) ensured more Belgian flags were raised. The third member of the factory Austrian set-up, Jordi Tixier, made a tearful first (and well-earned) podium appearance; the second teenage French rostrum debutant in successive races. Britain’s Jake Nicholls was close to a maiden top three result in the first moto but splashed and crashed out of the second and pulled out with a damaged set of bars. The Englishman’s teammate Glen Coldenhoff posted a career-best classification with fourth overall and showed that Dutch motocross might not just be a one-man show in terms of the limelight.

Timetables were consulted and paperwork thumbed on Sunday night for a stationary paddock. The whole show heads in convoy further east and across the border in the coming days with the second visit of the series to Russia this century. 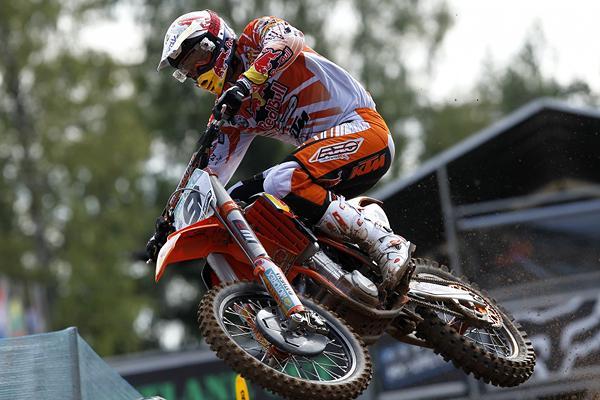 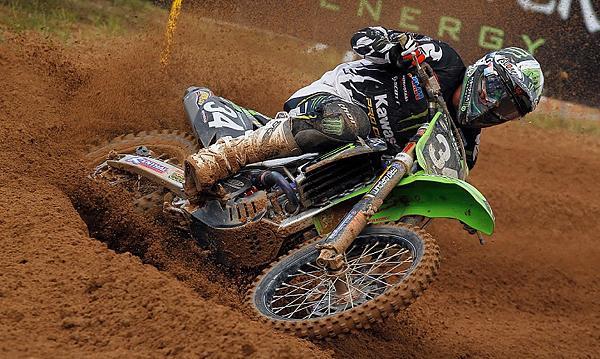 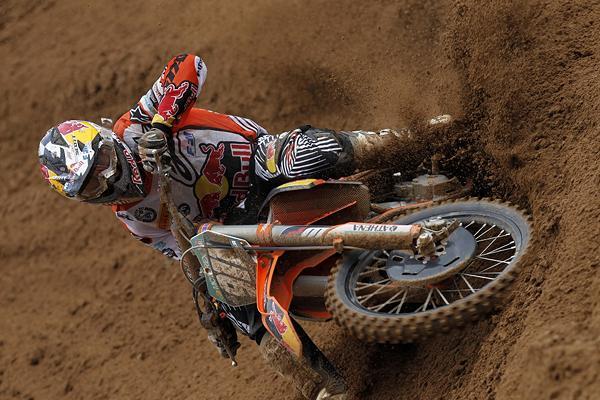