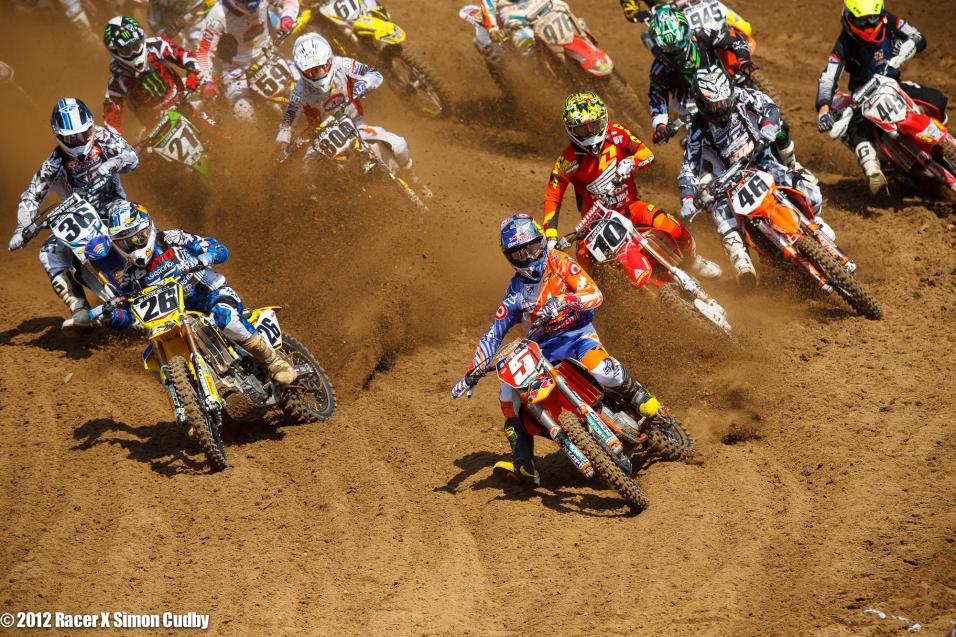 Advertisement | Advertise with Us
Spring Creek MX Park Millville, MN Spring Creek (Millville) Lucas Oil AMA Pro Motocross Championship
Call it Millville, call it Spring Creek. Call it round seven of the Lucas Oil Pro Motocross Championship, sanctioned by AMA Pro Racing. Or just call it Dungey land. In the 450 Class, the race represented another coronation for Minnesota’s favorite motocrosser, Ryan Dungey, who delivered his fifth-straight win at his home track, dominating the day with 1-1 scores. The Millville fans can speak to Dungey’s long road to the top, as they watched him grow up at this track racing alongside his brothers, and now find him atop the motocross world. 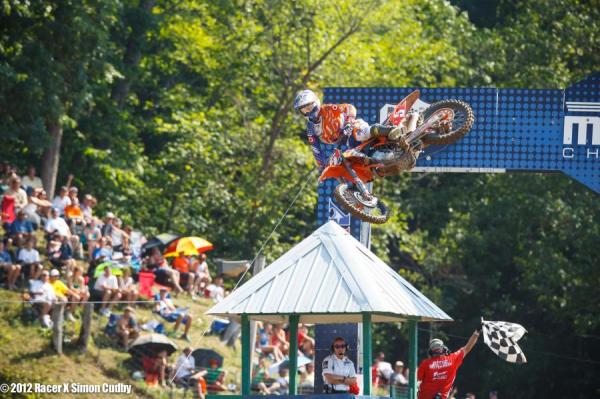 Meanwhile in the 250 Class, it looked like Monster Energy Pro Circuit Kawasaki's Blake Baggett was heading toward his third-straight overall win, but GEICO Honda's Eli Tomac hung tough, didn't give up, and his persistence paid off when Baggett crashed in the second moto. His 3-1 scores gave the Colorado native his third win of the season, with his teammate Justin Barcia second with a 2-2 and Baggett third with 1-4 scores.

In the first 450 moto, BTOSports.com/BBMX Suzuki rider Michael Byrne grabbed the start, but then bobbled before the second turn, and that actually held up Dungey and pushed the series’ leader back a few spots. Meanwhile Weimer and Alessi carved past Byrne for the lead, and Alessi made a wild pass for the lead while getting sideways in the sand whoops. For a few laps, Alessi set a blistering pace, pulling away from Weimer while Dungey began his methodical charge through traffic to get to third. He then overhauled Weimer for second and went after Alessi for the lead, but Alessi proved stubborn, riding one heck of a wide MotoConcepts Suzuki and thwarting Dungey’s pass attempts for quite some time. Dungey’s patience paid off as he eventually got around Alessi to take the lead and then take off with the moto win—his ninth straight.

Weimer really rallied in the second half of the race. As Alessi and Dungey slowed each other up a bit, he closed in, and then he kept pushing forward and passed Alessi back for second. Alessi hung on for third. Behind him a huge battle broke out for fourth, with Justin Brayton battling past Andrew Short, Tyla Rattray to get the spot. 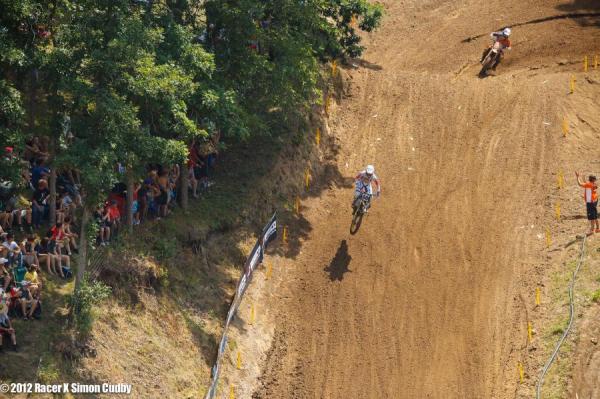 Alessi worked hard to keep Dungey behind him in the first moto. 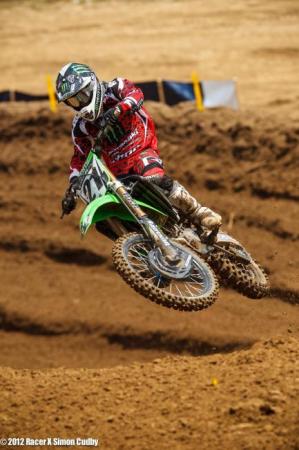 In moto two, Byrne nailed another incredible start, with Dungey right behind him, but this time Dungey got through the first corners clean and quickly made the pass for the lead. At that point, everyone at the facility knew The Dunge was going to win the moto and the overall, but that was perfectly fine for the partisan Minnesota fans that treated every lap of the race as if it were a victory lap.

Alessi knifed into second early and tried to keep Dungey in sight for a few laps, and he did, but eventually Dungey got away. This time Alessi rode strong all the way to the end, saying that some bike changes between motos helped his charge. Weimer started about sixth, not too far back, but just enough that when he finally arrived in third, he had no chance of catching Alessi this time. 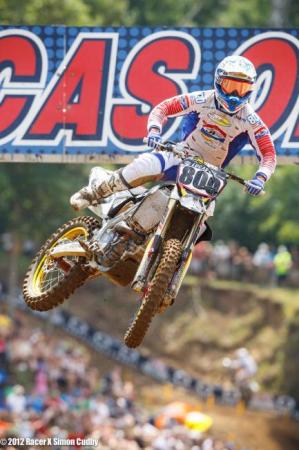 Alessi was stronger in moto two and took second behind Dungey, good enough for second overall. 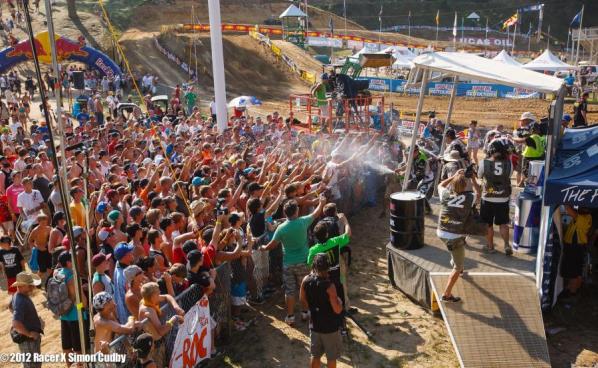 Big crowd on hand, and they stayed right until the final podium celebration.
Cudby photos

Brayton logged another solid run with a 4-4 day, while Broc Tickle, who crashed back to 12th in the first moto, took fifth in moto two. The second moto was one of attrition, as 13 riders didn’t finish for various reasons. Rattray, for example, crashed with Jimmy Albertson while up front on the first lap, then rallied back to 14th, only to run into Mike Brown and bash his front wheel, knocking him out of the race.

In the 250s, Barcia grabbed the first moto holeshot with Red Bull KTM’s Ken Roczen right behind him. Barcia’s teammates Wil Hahn, Justin Bogle and Tomac were right there off the start as well. Soon Tomac sliced his way into third and started graining on Barcia and Roczen, leading to a spectacular three-rider battle for the lead. At first, there was no sight of Baggett, who was bumped off the track in the first turn and finished the first lap in eighth. Later, Red Bull KTM’s Marvin Musquin fell in front of him, but Baggett was able to get around and not lose too much time. But he launched another one of his huge charges and climbed to fourth, and then started logging times nearly two seconds per lap faster than the leaders. Baggett was able to catch the Tomac-Roczen battle for second. He then passed Tomac around the outside of the turn connecting the two sand whoop sections, and then on the next lap, Roczen bobbled in the same turn and Baggett was able to pass him. Tomac got around Roczen as well for third, and he seemed to get fired up to try to stay with Baggett. Baggett and Tomac then caught Barcia. Tomac was challenging Baggett for second again but Baggett then executed an incredible pass on Barcia for the lead, diving super deep down to the inside of a fast sweeping corner and barely making the turn. Once into the lead, Baggett was able to check out, while Tomac couldn’t get around Barcia and settled for third. Roczen was fourth with Hahn fifth. 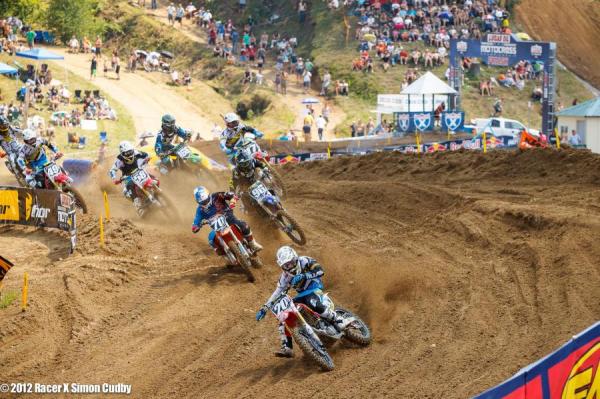 Barcia and Roczen led early in moto one. 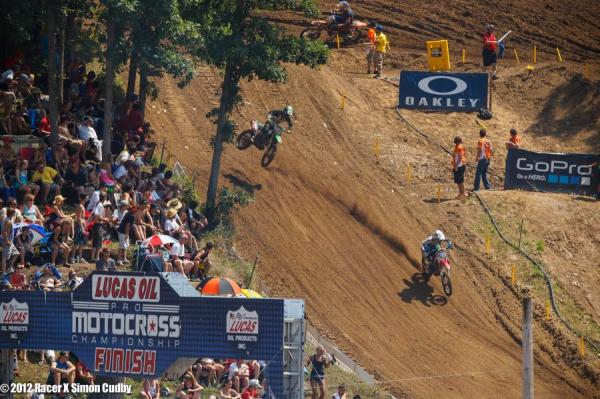 Baggett came from far back in moto one to catch and pass Barcia for the moto win. 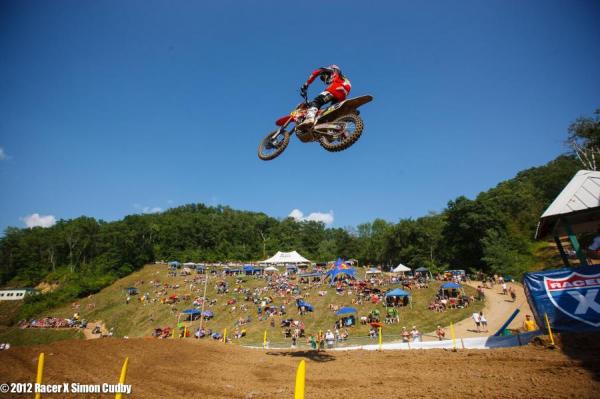 In moto two, Barcia grabbed the early lead again, but Tomac started in second and was able to pas his teammate to take the top spot. Baggett was closer to the front early, though, and then passed Barcia as well. This set up a Tomac vs. Baggett battle for the lead, and about halfway through Baggett was able to make the pass on Tomac to get the spot. Just a few turns later, however, Baggett slid out going up the face of a tabletop and crashed. He slid to a stop at the bottom of a blind jump, but had the presence of mind to run to the side of the track to avoid being hit by other riders. He got his bike back together and got up in sixth, then charged his way back to fourth by the end of the moto. It was a good recovery, but his chances for a third-straight overall win were gone.

So was Tomac with the lead. He built a nice gap over his teammate Barcia to take the moto win and win the overall with 3-1 scores. Barcia and Baggett were next, while Roczen went 4-3 to take fourth.Rockstar Suzuki Racing’s Blake Wharton was strong, going 6-5, while a few other 250 riders were up front early but went backwards. Justin Bogle, in his first race back following knee surgery, had good starts but struggled a bit down the stretch to go 10-8. Musquin had bad stats and a fall leave him with 7-6 finishes. Jason Anderson looked fast on his Rockstar Suzuki, but lost a header pipe in the second moto, dropping him from the top five to 10th. 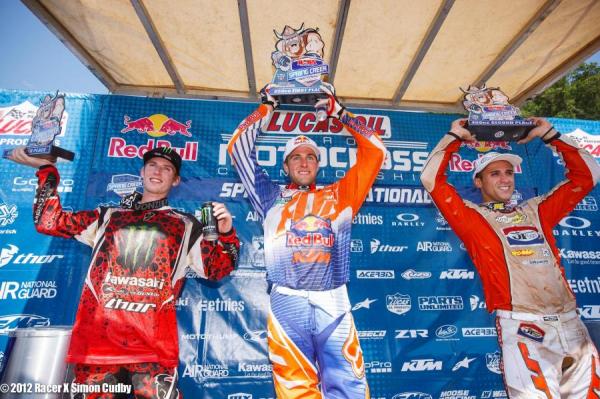 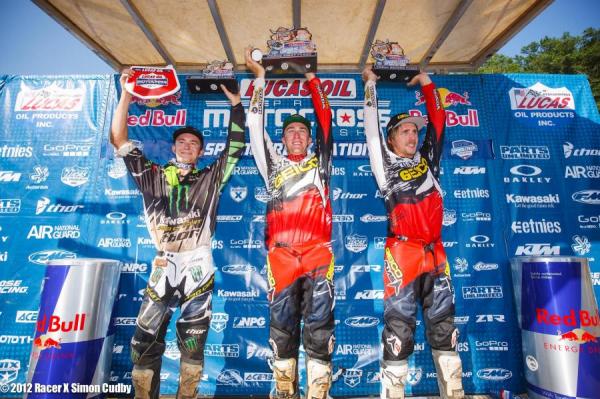 Tomac, Barcia and Baggett on the podium.
Cudby photo

450 Points Standings through round seven

250 Points Standings through round seven