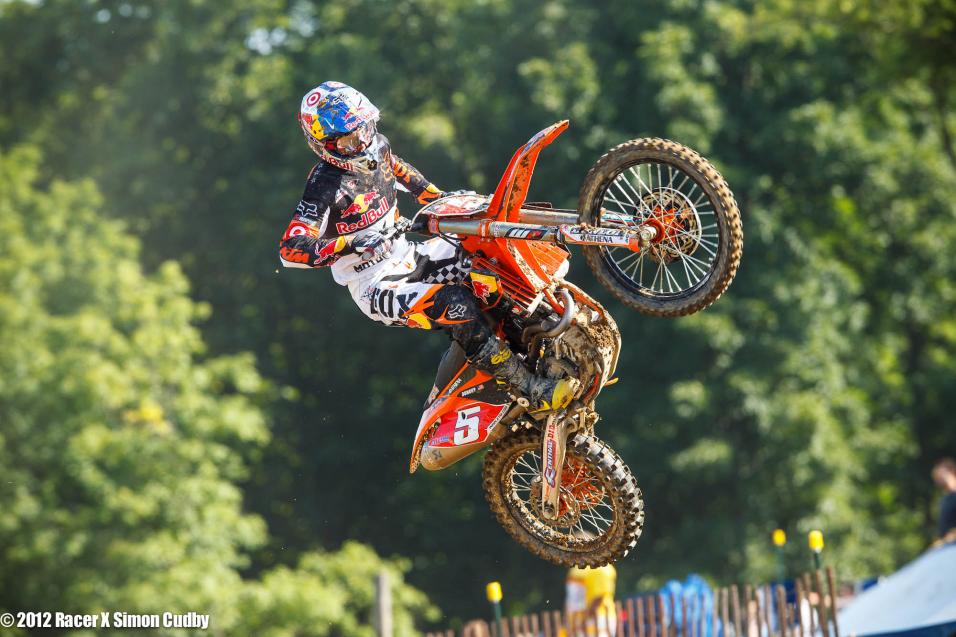 As round four of the Lucas Oil Pro Motocross Championship got under way on the picturesque hillsides of High Point Raceway in Mt. Morris, PA, the pits were abuzz with the return of James Stewart just one week after a hard crash at Thunder Valley threatened his season. The hype slowed to a crawl as Stewart seemed content to cruise through practice, in an attempt to save himself for the main. But a last ditch heat seeker on the final lap placed Stewart at the top of the charts—sending the already raucous High Point crowd into a frenzy.

Unfazed by the media whirlwind surrounding Stewart, points leader Ryan Dungey continued to quietly go about his business at High Point. But first he had to fend off the pit bull Mike Alessi. Last year Alessi entered High Point just a few short weeks removed from a hard opening round crash at Hangtown that sidelined him for the first two rounds of the series. But just like last year, Alessi would storm the gate, grab the early lead, and open up a small gap over Andrew Short, Dungey and Jake Weimer.

After disposing of Short early in the race, Dungey set his sights on Alessi. Meanwhile, Stewart was buried and having trouble getting out from underneath.

Unlike previous weeks, where he showed lightning speed early on, Stewart, hampered by a wrist injury, couldn’t seem to find the early spark. Although he moved his way up to fifth by the end of the race, Stewart was clearly suffering from the effects of his hard crash at Thunder Valley.

Up front, Dungey had worked made his way around Alessi and began to distance himself from the pack. But behind Dungey things were heating up between Jake Weimer, Andrew Short, Brett Metcalfe and Broc Tickle as the battle for the podium took hold.

In the end it was Weimer who would take round out the podium with Short, Stewart, Tickle, Metcalfe, Izzi, Millsaps and Grant finishing off the top ten.