When the gate dropped Tommy Hahn rocketed out to take the holeshot, but it wasn’t long before James Stewart started making moves. Roughly six minutes into the race, Stewart had taken the lead and was checking out while Dungey was stuck trying to fight his way past Jake Weimer.

It was starting to look like Stewart would extend his winning streak to five straight motos, until he went down hard and pulled out of the race. A few minutes later Stewart told the television crew that he had crashed while attempting to avoid a spectator that was crossing the track. 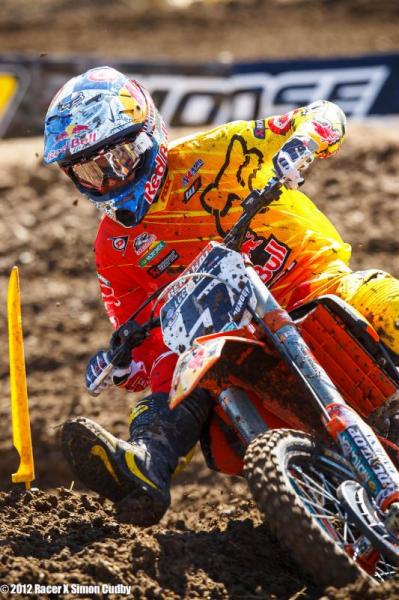 With Stewart out, Dungey went on to a relatively easy win, with Weimer taking second. Brett Metcalfe and Mike Alessi battled hard over third in the closing stages of the moto, until Metcalfe took over the spot when Alessi failed to clear a table. Metcalfe would extend his lead several turns later when Alessi got held up by a lapper. Nico Izzi would round out the top five.

After taking the holeshot, Hahn crashed and finished out of the points. Broc Tickle DNF’d the moto with bike problems.