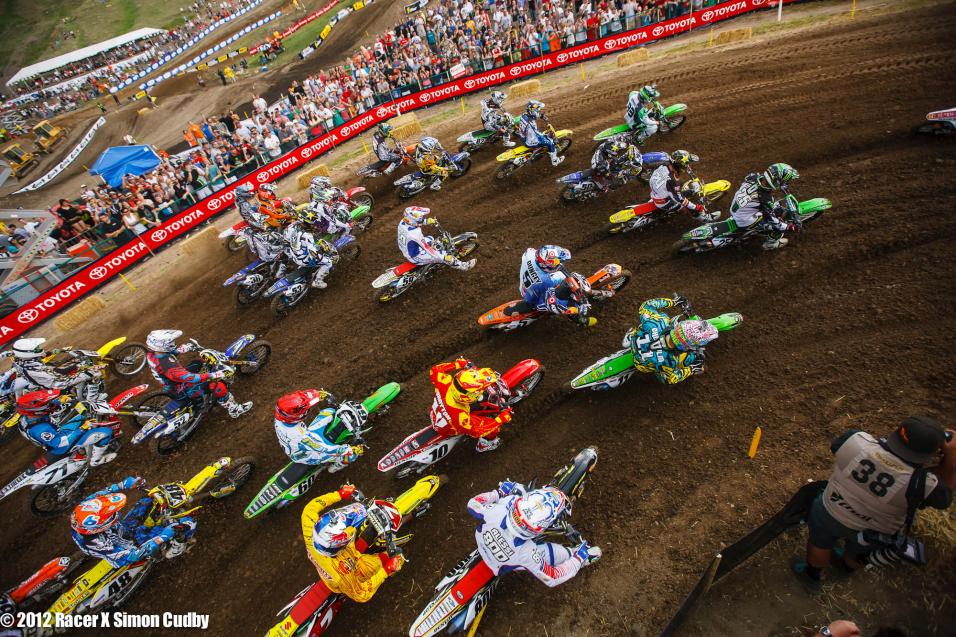 Lakewood, Colorado, just outside of Denver, was the host for this third round of the Lucas Oil Pro Motocross Championship, sanctioned by AMA Pro Racing, and it shook up the series standings quite a bit. At the end of the wild day, Red Bull KTM’s Ryan Dungey, GEICO Honda’s Justin Barcia and Rockstar Suzuki’s Jessica Patterson had emerged with the overall wins in the 450, 250 and WMX classes.

The 450 class was headlined by a big crash from series points leader James Stewart, who was leading the first 450 moto before going down early in the race. Footage from Stewart’s GoPro helmet camera revealed a photographer had crossed the track as Stewart was landing from a jump. Although the footage revealed they weren't close enough to have collided, Stewart’s team indicated that he was forced to adjust his line and lose focus just as he hit a deep set of ruts. He went down hard. That ended Stewart’s day, as he retired to the Yoshimura Suzuki truck with a jammed wrist. His status for next weekend’s race at High Point is now uncertain, as he will get the wrist checked out when he gets back home. 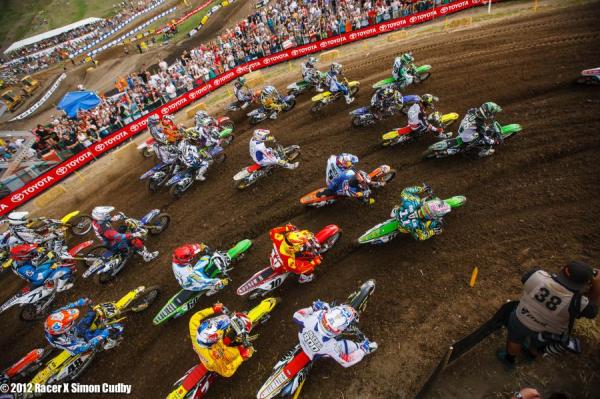 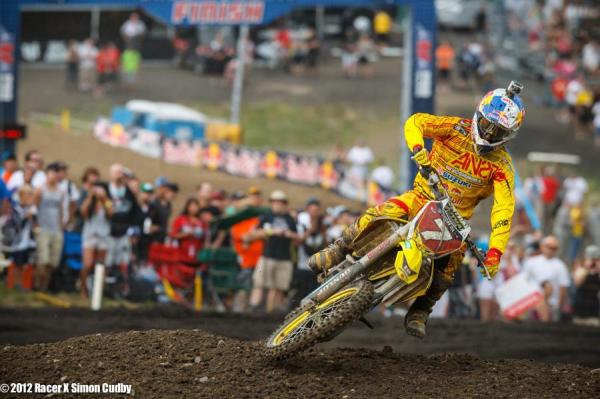 Stewart pulled into the lead early in moto one. 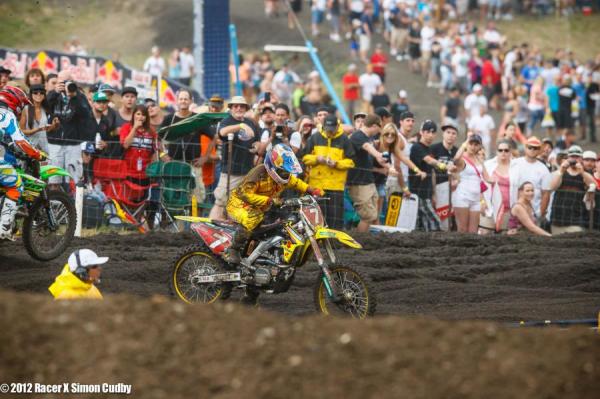 But then a big crash ended his day. 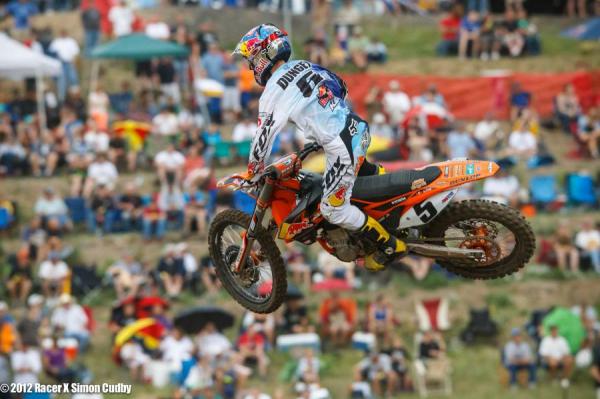 Without Stewart to battle, Dungey was able to pull clear to solid 1-1 finishes.
Simon Cudby photos

Before the crash, Stewart had climbed from ninth to second in the first lap, and then overhauled Team Honda Muscle Milk’s Tommy Hahn for the lead. Before long Red Bull KTM’s Ryan Dungey was into second and trying to close back in on Stewart. Once he inherited the lead after the Stewart crash, he opened up a big gap and hung on for his first moto win of the season. Monster Energy Kawasaki’s Jake Weimer rode a solid race for second with Yoshimura Suzuki’s Brett Metcalfe in third.

In moto two, Dungey got the holeshot and had pressure early from Colorado’s own Andrew Short. Short rode well but eventually Dungey got away, posting 1-1 scores for the day and taking over a big points lead.

“I hate to win like that,” said Dungey, who has won three consecutive races at Thunder Valley. “James and I have pushed each other to new levels and although he won the first four motos (this season), it’s been good. Hopefully he heals up and comes back (next week). My game plan is always the same, to take it one race at a time. You can’t focus on the end result and we saw that today. I just do my own thing, put my best foot forward, and never underestimate anyone.”

Battles raged behind him, with Short under pressure from Weimer and Monster Energy Pro Circuit Kawasaki’s Broc Tickle. Tickle rode strong and eventually overhauled Weimer for third, but Short hung on to finish second. But Tickle didn’t finish the first moto with bike problems, so that left Dungey, Weimer and Short in the top three overall. 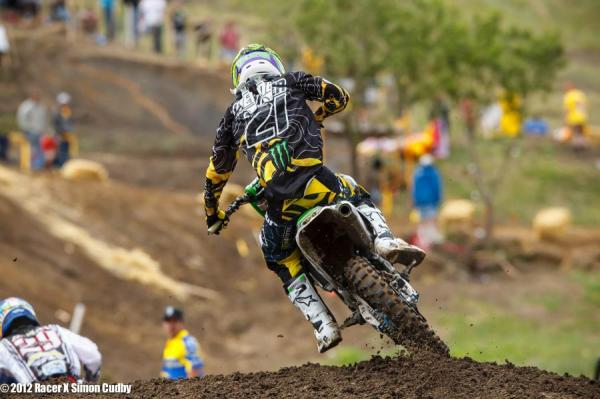 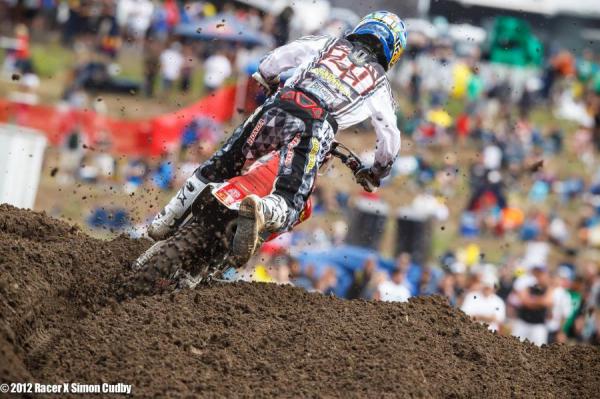 Andrew Short demonstrates how deep the ruts were at Thunder Valley. The home-state favorite took third overall in the 450 class. 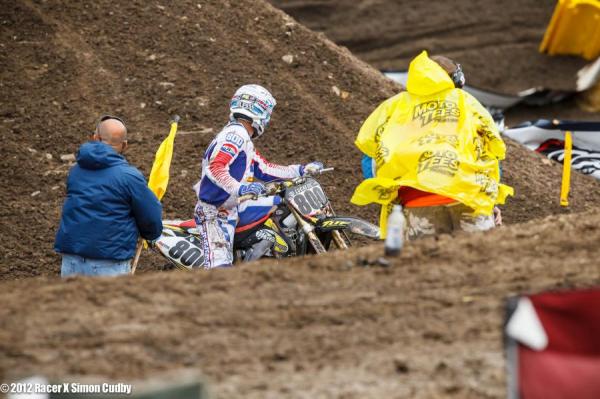 Mike Alessi's two-race podium streak came thanks in part to an early crash in moto two. 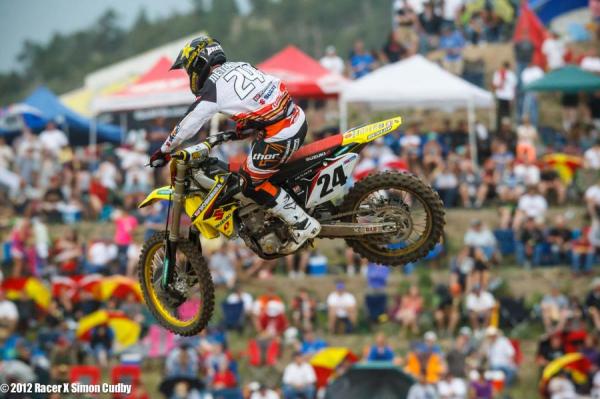 Brett Metcalfe got around Alessi for third in moto one, but troubles early in moto two knocked him off of the overall podium. 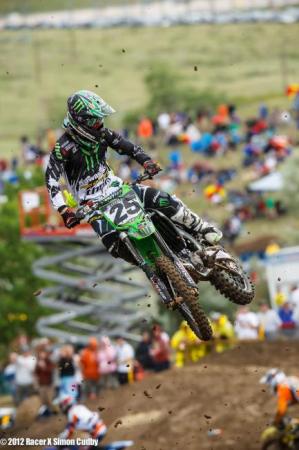 Broc Tickle's second 450 moto--where he got around Weimer for third--was his best 450 performance yet. Bike troubles in moto one hurt his overall score.
Simon Cudby photo

Then all heck broke loose, but not in the first 250 moto. Before that race even started, the perfect storm broke out, with high winds, rain, thunder and lightning making the Thunder Valley name apt. The first 250 moto was held up for an hour, and when the racing began, the track was a little muddy—and the ruts had become super deep.

Once it started, the 250 class hosted its usual array of crazy racing. Barcia grabbed the holeshot in the first moto and spent much of the race holding off Red Bull KTM’s Ken Roczen, who would make frequent attacks from second. Points leader Blake Baggett, on a Monster Energy Pro Circuit Kawasaki, caught neutral off the start while shifting from first to second gear (first gear starts are needed at altitude, and up Thunder Valley’s uphill start). He had to come from way back. Also way back was last week’s winner Eli Tomac got a poor start. Tomac worked his way into the top ten and then tipped over and lost a few spots. Later Baggett would have a similar crash in the deep ruts himself while trying to pas Rockstar Suzuki’s Blake Wharton. Despite that, Tomac and Baggett kept moving forward, with Tomac getting to fourth, and Baggett to third.

Late in the moto, Roczen tried another run on Barcia but also crashed in a rut, similar to Baggett and Tomac. This allowed Barcia to cruise to victory, while Roczen got up under heavy pressure from Baggett. Roczen managed to hand on for second. 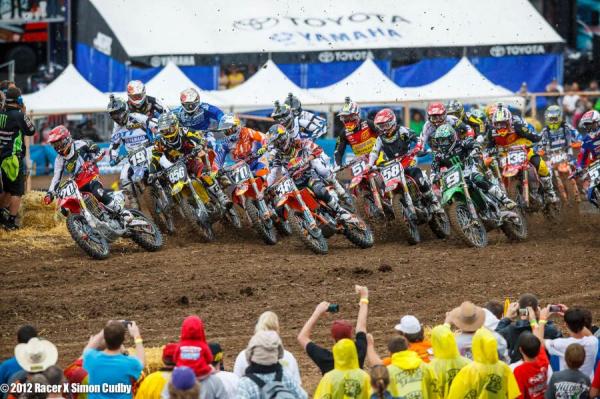 Barcia got back to his old starting tricks in Colorado. 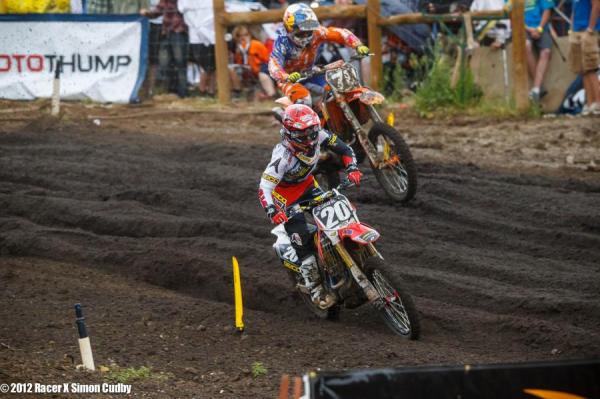 Barcia and Roczen were about this close all day.
Simon Cudby photos

Wil Hahn grabbed the holeshot in the second moto but Barcia swept to the inside and immediately had the lead again, with Roczen all over him, again. Roczen’s teammate Marvin Musquin was there, as well, but this time Baggett and Tomac had better starts, and soon Barcia, Roczen, Baggett and Tomac were into the top four spots. Each exchanged fast laps, putting on a first-rate battle. At one point, Tomac looked like the fastest rider of the group, but around the halfway mark, Baggett began putting together one of his patented charges, getting away from Tomac, and then getting around Roczen and Barcia and pulling away with the lead.

Barcia would later say he was suffering from rear brake problems, but if he held on for second, he would still edge Baggett for the overall win. But Roczen, after about an hour of trying through the two motos, finally made a pass on him. This set up Baggett for the overall win with a 3-1, until a crazy last lap. Barcia put in one last-ditch charge to try to get Roczen, and when Roczen got held up by lappers, Barcia was able to pull alongside him. Roczen tried to block Barcia’s line by cutting across some ruts. They touched, and Roczen went down. Barcia stayed up and took second back over, which put him back into the overall lead. Tomac also got around Roczen for third. At the finish, Baggett won the moto, but Barcia edged his 3-1 with 1-2 scores. Roczen’s 2-4 edged Tomac’s 4-3.

“Last weekend was tough on me, but today was awesome,” said Barcia, who last won as a rookie during the 2009 season. “The first moto couldn’t have gone any better and the second moto was good too. I knew what I had to do (in the second moto). I rode my own race a little bit, but then I put on a hard charge at the end. Ken and I may have touched a little bit, but I just kept going.” 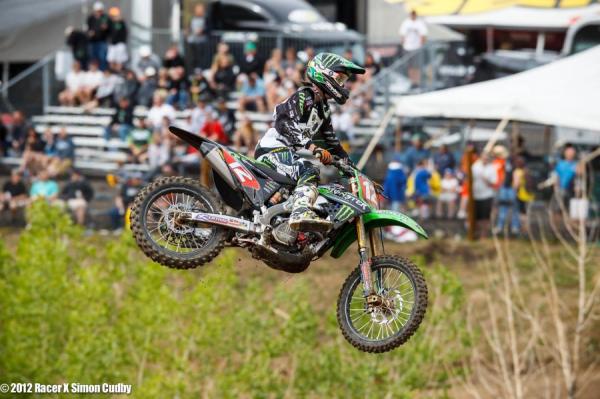 Baggett took off with the second-moto win. 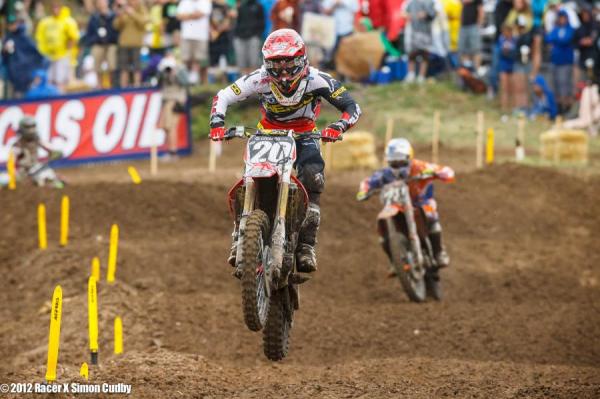 Once again, Barcia and Roczen hooked up in a battle. 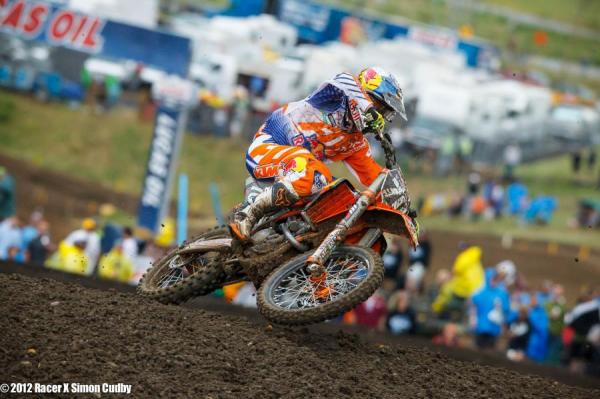 Roczen and Barcia came together on the last lap, Roczen went down and Barcia stayed up--and that made the difference for the overall win.
Simon Cudby photos

In the WMX class, Patterson and Team Honda’s Ashley Fiolek put on a superb battle in the first moto, one of the best in their long-running rivalry for the top spot. The two were never more than a few bike lengths apart, but Patterson held on to win.

Things got crazy in moto two, as Fiolek had a big crash and was only able to solider on to finish sixth. Patterson had troubles as well, allowing Lucas Oil Troy Lee Honda’s Tarah Gieger to take the lead. Then Gieger made a bobble, and Patterson took the lead, giving her 1-1 scores and the overall win. Gieger and Fiolek rounded out the podium.

"I didn't feel like I was in my groove in the first moto, but Ashley and I had a really great battle, and that made it fun," said Patterson. "It was good for the fans, too. I've got that red plate, and the team says I'm not not allowed to lose the points lead because it looks sweet on the bike."

The series next heads east to High Point Raceway in Mt. Morris, Pennsylvania. 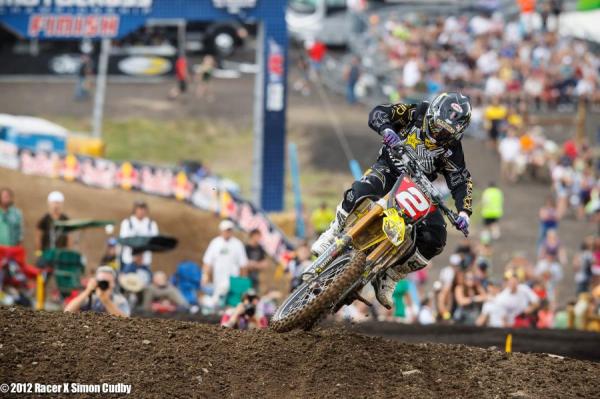 JP$ was money in the WMX class.
Simon Cudby photo 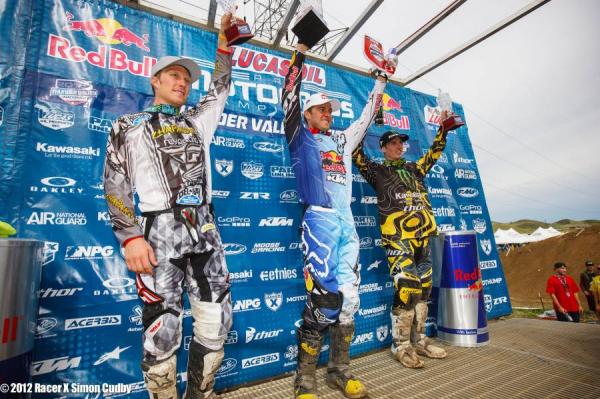 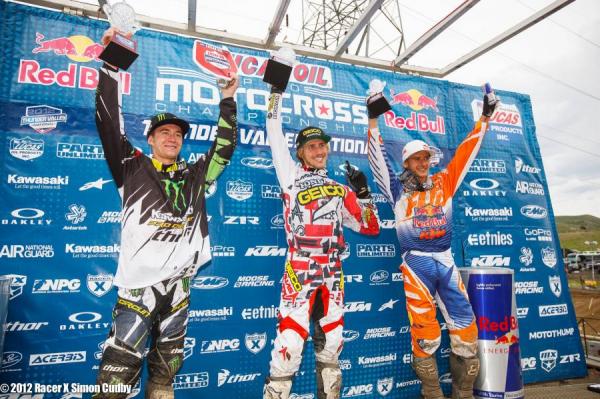