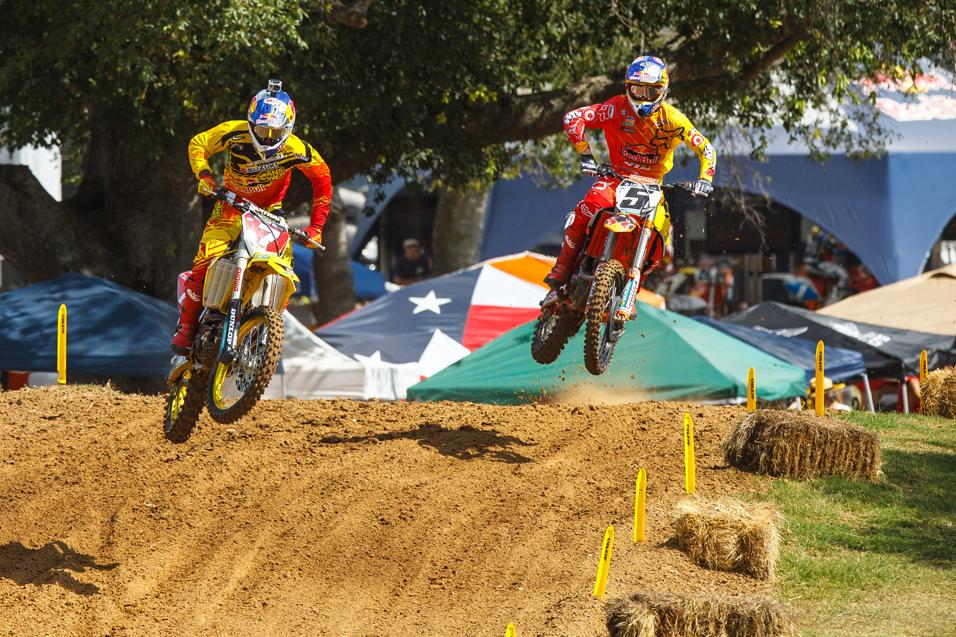 In this weeks Sign of the Lap Times feature we briefly touched on how amazing, brilliant, and down right remarkable James Stewart and Ryan Dungey were at Freestone. The two were unmatched as they galloped around the Lone Star State in a drag race to the finish in each moto. As previously noted in Sign of the Lap Times, not only were their fastest laps two (first moto) and three (second moto) seconds faster than the next closest competitor, their average lap times eclipsed the fastest lap set by anyone else!

Anytime you see such a battle, you’re naturally drawn into the stats, trying to find any and every correlation that may or may not have validity. But as you can see in the charts below, sometimes the barrel comes up empty. Stewart would fire down a quick lap, only to be matched by Dungey. Dungey would draw closer with a scorching time, only to be outdueled by Stewart a lap later. Each rider tried to make a run, find momentum and make a move, but each time, his competitor would match him, and the gap would stay the same! This was nothing more than a Texas standoff where Stewart fired first… and last.

Look at the chart below to see the full lap times from each rider in moto one and moto two. It doesn't get any closer!

*Bold: The fastest lap of the rider in each session.

In moto one, Stewart got the drop early, making a pass on Dungey during the first lap, then building a small gap. Then Dungey found his groove and closed in on lap three, Stewart responded on lap four, prompting Dungey to log a flyer on lap five and six, so Stewart picked it up on lap seven, leaving Dungey to really pick it up on lap eight and log the first 2:04 of the race. From there, they exchanged fast laps, until lap 16, when they both dropped the hammer and logged their fastest times of the race. Dungey knew it was time to go, but so did Stewart, leaving them to both hit the 2:04 mark on the next-to-last lap. Incredible! Also note that, until the final lap when Dungey hit some traffic, they were within a second per lap on every lap!

Similary story here to moto one, with both within a second on just about every lap. You can see Stewart went for one last crazy sprint on lap 15, but Dungey came right back with his best on lap 16, although Stewart kept the hammer down and matched that 2:05. All in all, an amazing duel. Hopefully we get to see it again!