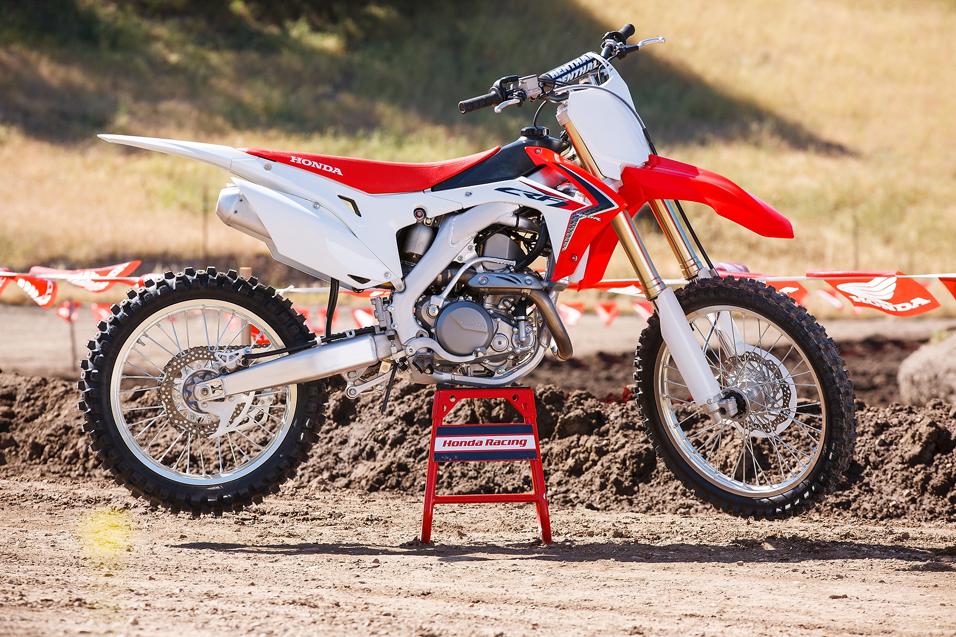 May 29, 2012 11:15am
by: David Pingree
When we arrived at the airport in Torrance near Honda headquarters I wasn’t sure where we were going or what bike we would be riding. However, it was very clear that the folks at Honda were excited about something and anxious to share it with the motocross world. We piled into the helicopter and headed north over the Hollywood Hills and along the coast northbound. An hour later we descended onto the Zaca Station course just north of Santa Barbara. A perfectly prepped track awaited us, as did the 2013 CRF 450. The bike looked amazing just sitting on the stand. The plastics are sharp, minimized and even thinned and tapered to save weight. The frame is entirely different, as is the swingarm. This was going to be fun.

We sat down in the hospitality transporter and received a presentation on the new motorcycle from the Honda staff and engineers who helped create the new machine. The concept was to build a bike for a new generation of rider: The scrub generation, as Honda referred to them. They wanted to build a bike that felt lighter and more nimble than anything before it. 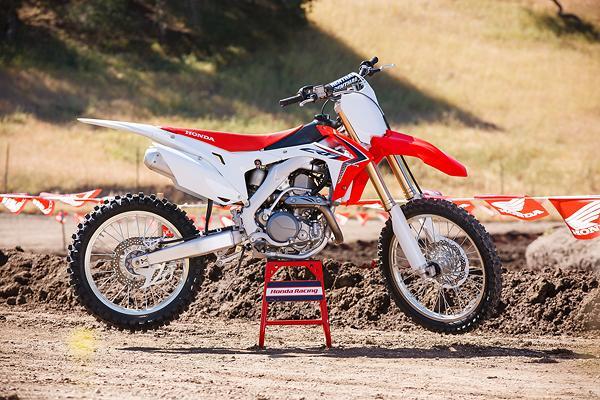 They started with a new chassis. The frame geometry is completely redesigned and aimed at bringing weight down and to the center. The head pipe and frame tube junction is significantly lower, bringing down the center of gravity. The shock mount is 14mm lower and the EFI components are mounted lower as well.

The swingarm is redesigned to increase rigidity and work with the new frame geometry.

The forks are the new KYB PSF [Pneumatic Spring Fork] and they are two pounds lighter than a conventional spring fork. They also allow much easier adjustability for the rider. KYB staff members were on-hand to help with suspension setup.

The Unicam engine has been redesigned to improve low-to-mid power without sacrificing top end power. An increased compression ratio, revised cylinder head, larger exhaust valves, new valve timing, new piston jet, a heavier flywheel and a new intake boot collectively account for the improvements. The transmission has also been strengthened and a six-spring clutch added for increased durability and an easier pull. The new 450 also comes with Honda’s patented dual exhaust system. The idea is to lower the CG and maintain performance while staying below the 94 decibel limit. 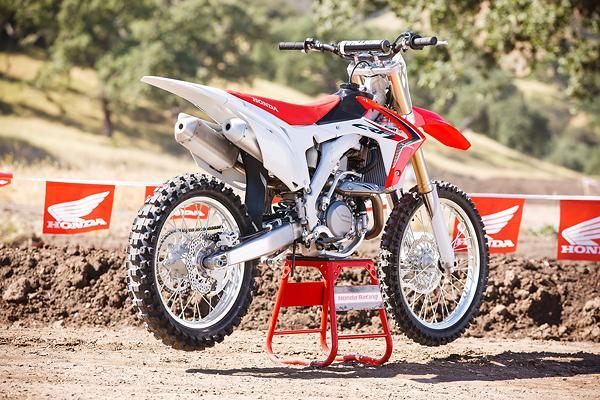 The details include a slightly larger tank [5.7 liters to 6.3 liters] new footpegs and peg guards, which prevent mud from packing and holding them up. There is a new MX51FA front tire, a new front disc cover and slightly smaller radiators as well. The wet weight of the 2013 model is around two pounds heavier than the 2012 model, though the Honda engineers assured me I wouldn’t feel that.

The new Honda will be available in September and will retail for exactly what the 2012 CRF450 cost, $8,440. That is great news. After chatting with the Honda staff they explained that it was a priority to them to keep the price where it was. Their studies have shown that they have reached a ceiling with the cost of off-road motorcycles and they were determined to avoid the typical two-to-three hundred-dollar increase that has been the norm for years. A hydraulic clutch was in play at one point but would have meant a certain increase in cost so they left it off. 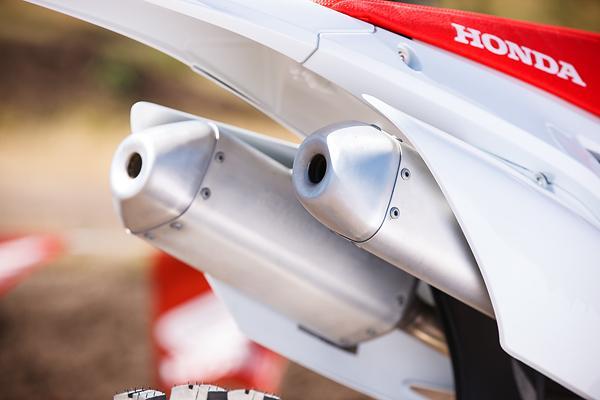 On the track the bike felt light. Very light. It had a sharp turning radius on the ground and once you got it in the air it almost felt like a BMX bike. You could adjust bike attitude with ease and never felt like you were moving around a heavy motorcycle. The engine has a noticeable improvement in torque down low. Last year there was a slight hesitation or “soft spot” at low RPM when exiting tight turns. The clutch is no longer required as the new flywheel and engine package pull you right out of the deepest ruts. I had some front-end push and stinkbug feel that made the back end dance around and gave me some headshake when loaded heavily. I pulled in for a chat with the KYB staff to discuss changes. They explained that the standard air pressure setting in the fork is 33 psi. This is their baseline. I wanted to soften the rear to level out the bike but they suggested adding more air to the fork to get it to ride higher in the stroke. Two pounds of air is the equivalent to one spring rate. The air pressure in the fork is more of a positional change; it dictates where the bike will ride in the stroke. The clickers, which have been angled back to make access easy [why didn’t this happen sooner?], are more speed sensitive and can still be used to find the feel you want. I went from 33 psi to 35 psi and went back out. The change was incredible. The bike was balanced, stable and as predictable as any bike I’ve ever ridden. I was able to charge into turns with no concern about losing front-end traction or having the back wheel step out of line. It was amazing how much difference the change made. 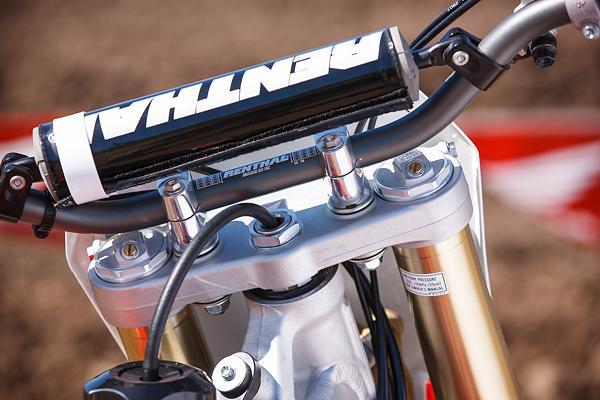 I came away extremely impressed with the new Honda CRF 450. They managed to improve a bike that was already great and they did it without changing the price. The engine still has a smooth, electric feel to it but it has enough grunt to make sure you don’t need the clutch when exiting turns. Our time was limited since there were only a couple models in the country right now, however, Honda assures us we will get more time on the bike soon when they do a proper press introduction. Stay tuned for that and visit www.honda.com for more information. 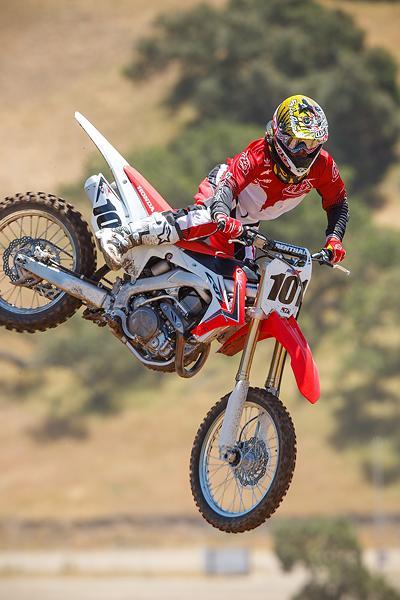