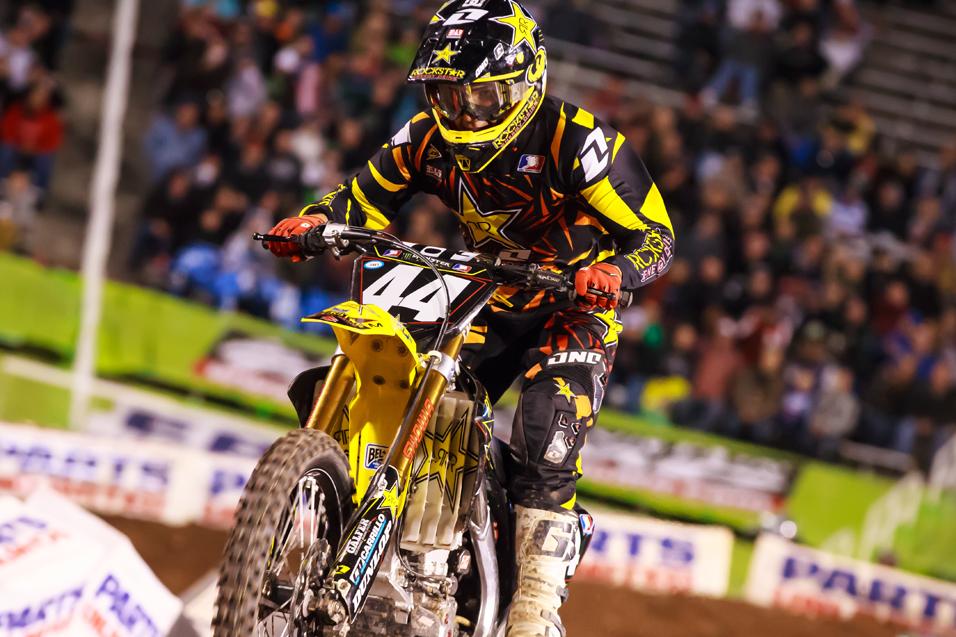 May 1, 2012 5:15pm
by: Jason Weigandt
Rice-eccles Stadium Salt Lake City, UT Salt Lake City Monster Energy AMA Supercross Championship
The Rockstar Suzuki Racing Team didn’t exactly explode out of the gates last season in their debut as Suzuki’s official Lites factory team. In fact, most of their 2011 season was marked with disappointment, especially in comparison to the other factory Lites/250 teams. Kawasaki, Honda, Yamaha and KTM all put Lites bikes into the winner’s column last year, and only Suzuki came up short.

This year didn’t start much better for the Rockstar team, but Blake Wharton finally provided a shot in the arm via strong riding, and a win, on the East. Now, finally, the Western boys got in on the act.

First, Martin Davalos finally closed the deal in a main event, delivering a podium finish after too many days of fast practice laps, heat race wins, and then zeros to show for it in the main.

One spot better came his teammate Jason Anderson. Once a shining star in the amateur ranks—a Suzuki teammate, in fact, of Eli Tomac, and a rider capable of beating the new West Lites SX Champion—Anderson’s pro career has not started at all like Tomac's, who won the first race he ever entered. Anderson’s 2011 rookie campaign was so bad, that Team Manager Dave Gowland actually sat him for a few races during the Lucas Oil Pro Motocross Championship, allowing Anderson to rebuild his training program from the ground up. Anderson progressed a bit toward the end of the summer, and carried that improvement to supercross this year. He rode better, but still, no podiums. As an amateur, Anderson was known as a fierce, aggressive, let-it-all-hang-out charger. So far as a professional, though, that fire seemed to be missing. 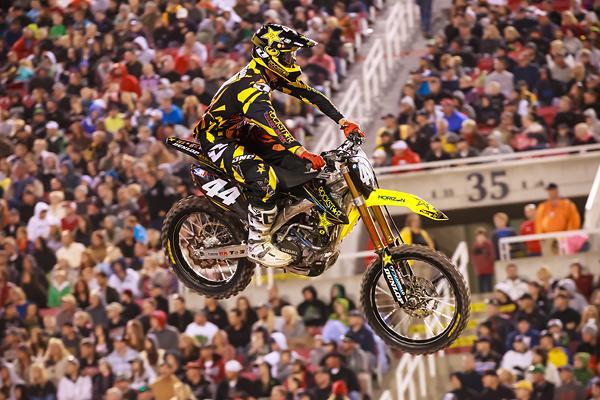 Finally, on Saturday night, Anderson found that fire in a strange place. He ignited one of the most bizarre crashes we’ve seen, taking down Ryan Sipes (and himself) in a first turn wreck…on the parade lap! But the adrenaline from that seemed to carry him forward, as Anderson holeshot the main, and then pulled a move as slick as the parade lap crash was rough—his neck brace loose, Anderson, in mid air over a triple, ripped the brace off, and didn’t skip a beat.

He absolutely flew through the first few laps, but ultimately, he ran into some nerves in leading his first pro race, and his old amateur teammate and rival, Tomac. But he finished second for his first pro podium. A year later, Anderson and his team are finally delivering on his promise, and for that, we present him with this week’s Racer X Outstanding Performance Award.