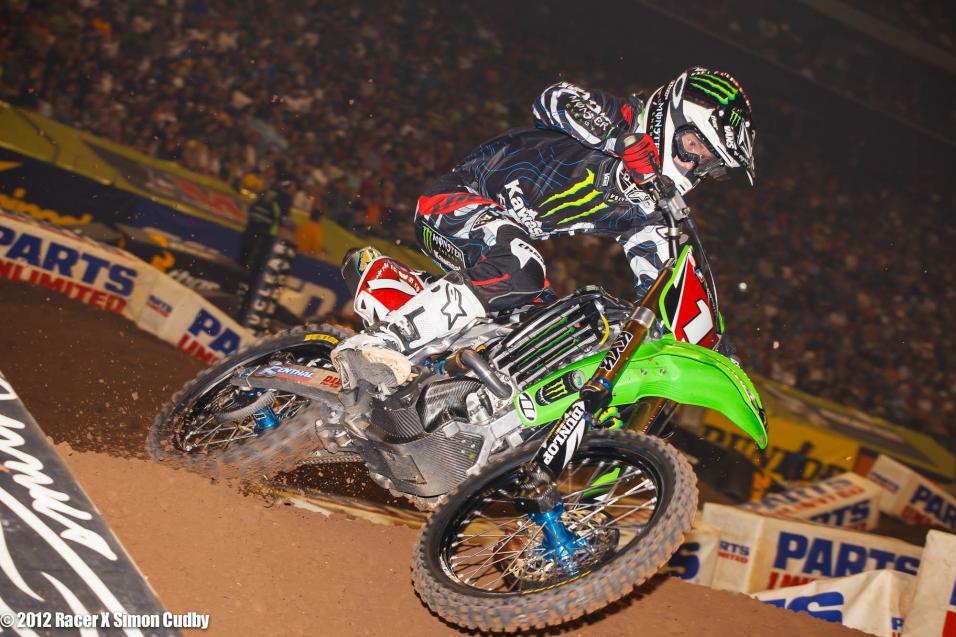 We all knew it was coming. Once Ryan Dungey had to bow out of the championship prematurely with a broken collarbone, the series belonged to Ryan Villopoto. Sure James Stewart was still a threat. Sure Justin Brayton and Davi Millsaps were hitting their late season stride. But Villopoto was far and away the clear cut favorite -- each and every week. Houston proved to be the final nail in the coffin as Villopoto became the quickest rider in Supecross history to clinch a championship and the first since the GOAT in 2005 and 2006 to win back to back titles.

For the first fourteen and a half laps Houston's Lites race looked like the majority of other races in 2012: Justin Barcia running away from the field. Barcia would fight off an early challenge from Ken Roczen and looked well on his way to his sixth win of the season. But the fairy tale ending quickly turned sour as Barcia had a late run-in with Lance Vincent, costing him not only the race, but probably a few fans after an outburst of epic proportions. Ken Roczen was there to pick up the pieces and held on for his first win of the season.

You will hear plenty more about Houston throughout the week, so let’s take a look at the lap charts to see how it all broke down.

For what seems like the 50th week in a row Ryan Villopoto topped the lap charts in the Supercross class. With the championship firmly in hand Villopoto was still reluctant to take his foot off the throat of the competition. RV’s 46.361 was nearly a full second faster than James Stewart’s 47.137—a clear sign that RV was ready to wrap this championship up and begin preparations for the upcoming Lucas Oil Pro Motocross Championship.

Stewart, meanwhile, was saddled with another terrible start, and later crashed out. But in between that, he managed the second-fastest time while carving through traffic. Stewart still has speed, but the results don't reflect that. Meanwhile, the odds of Davi Millsaps being the top rider for the JGR team with just four rounds remaining at the beginning of 2012 were probably less than 1 percent. No disrespect to Davi, but if Vegas was taking bets the house money would have been on Stewart. Millsaps reveled to Racer X Online Editor Jason Weigandt after Houston that he had surgery in December and had less than two weeks on the bike before Anaheim 1. Davi was reluctant to let on why he has become such a force down the stretch, but things became a lot clearer after this weekend. Millsaps sits a mere one point behind the idle Ryan Dungey for second in point standings and has a real shot at taking home the runner-up spot behind RV for 2012. That's a far cry from where many thought Millsaps would be after a rough start to the 2012 season. 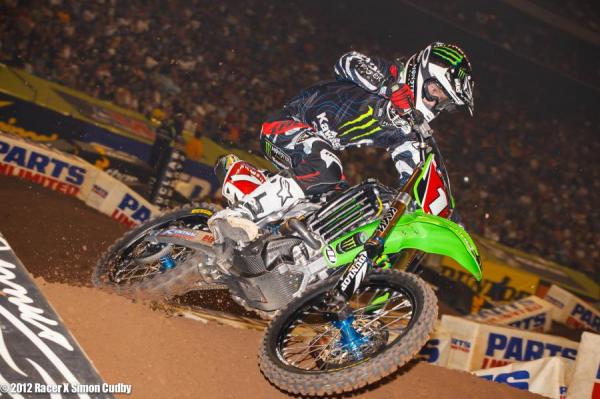 Villopoto walked away with the win and the fastest lap of the night.
Cudby photo

Let’s for a moment forget about Justin Barcia's antics after the Lites race in Houston and instead concentrate on what happened on the track. Barcia continues to push the competition to the limits and has all but wrapped up his second consecutive title. With only Blake Baggett dipping down into the 46-second range, and still a half-second off of Barcia, BamBam1E clearly showed that he is still the cream of the crop in the Lites East Region.

The 2012 season began on a rough note for HRT Racing’s Matt Lemoine. But the Louisiana kid that now resides in Texas has suddenly caught fire. Lemoine capped of his third straight top ten (Lemoine had zero top tens through the first four rounds of the series) in front of the hometown fans at Houston, in the process setting the sixth fastest lap of the night—a season's best. Lemoine’s tenth also moved him inside the top ten in points. Lemoine currently sits ninth in points, two clear of J-Star/JDR KTM's Malcolm Stewart. 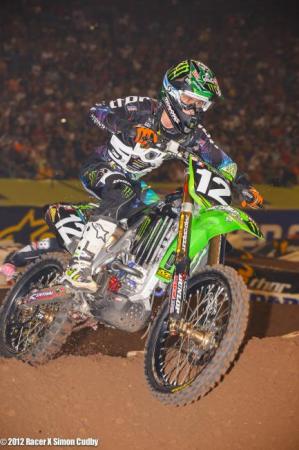 Blake Baggett rebounded with third in the race and second in the lap charts in Houston.
Cudby photo