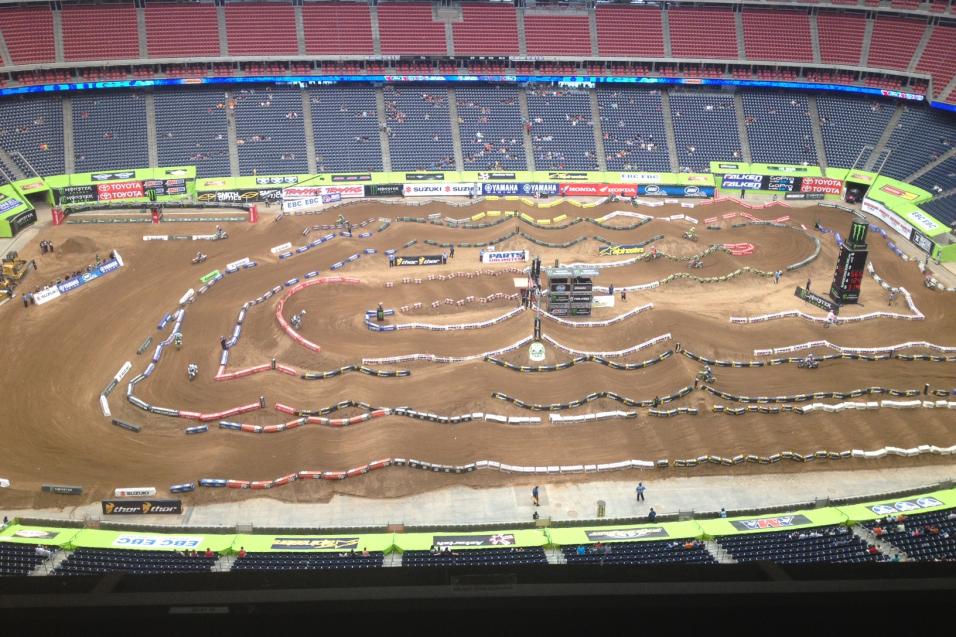 The news from Monster Energy Supercross in Houston is pretty good: the weather is nice, Reliant Stadium is one of the biggest and nicest venues on the circuit, and the dirt inside is awesome.

And, the fans will really have something to cheer about if Kevin Windham rolls strong in tonight's main event. KW was fastest in the first 450 timed A qualifying sesson today, topping Ryan Villopoto by a tenth of a second. Windham is always popular, but things are even bigger for him in Texas, as Houston is considered his second home race besides New Orleans.

The times read: Windham 46.1 to Villopoto's 46.2, then Weimer 47.7 Stewart 48.00 and Brayton 48.09. Nico Izzi topped the B session with a 47.9, making him 4th fastest overall, however there was some track work between sessions so it makes it hard to compare times. 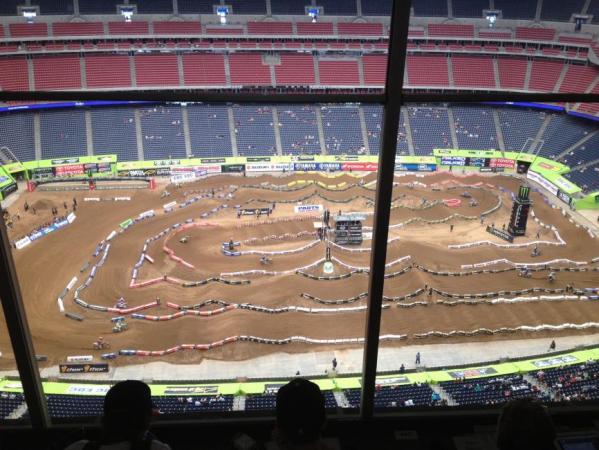 The view from the Houston press box.
Weege pic.

In Lites, Blake Baggett told us this morning that he "changed something with himself" this week, and it showed in the first timed practice when he took the fastest time. Points lead Justin Barcia was next, then came Darryn Durham, Malcolm Stewart and Ken Roczen. Roczen told us he is still feeling the effects of the flu, and didn't ride and train this week. He is feeling better than last weekend, though.

In other news, Josh Hill was scheduled to return to racing this weekend for Dodge Motorsports/Hart and Huntington, but he hurt his arm this week and is back out. Privateer Mike Horban got the call to sub in for him. And Josh Hansen also returned to action for H&H after missing Toronto with ankle problems.

Nick Wey is not here, still recovering from a crash at Indy, but he will be back for New Orleans.