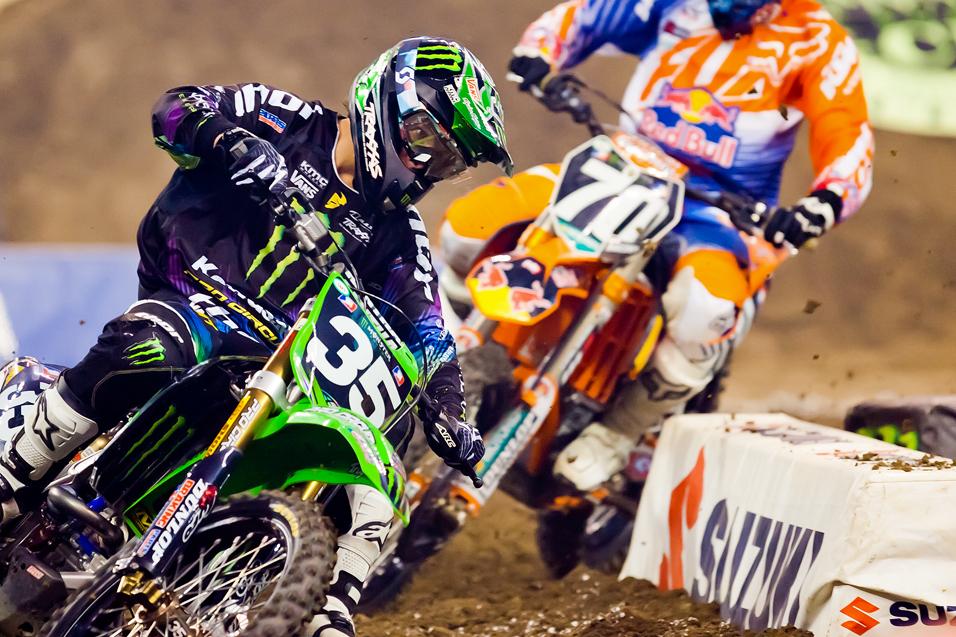 By Jordan Roberts and Aaron Hansel

Keep your eyes peeled for… wait, no James Stewart? The team made the last-minute decision to not race this weekend with lingering effects from his crash in Indianapolis still being a factor. This will open up and already wide open field.

The weather in Toronto can be quite cold this time of year. How cold you ask? Cold enough that our own Steve Matthes has been known to don a set of long pants when in town covering the race. In the past, the dirt has been stored outside in the wet and chilly weather, which has resulted in frosty, frozen soil. When the dirt thawed inside the stadium, the result was a soft and wet racing surface that broke down very quickly. This year, the dirt was stored under a large freeway overpass in an attempt to keep the moisture out of it, which should make for a track that holds its form much better and longer throughout the course of the night.

According to the Toronto track map on supercrossonline.com, there is a small jump about halfway down the start stretch. While not large enough to catch a significant amount of air, it’s definitely going to play a role in the riders’ ability to keep the power to the ground. Will the obstacle have a bearing on who nabs the holeshot, will it result in a multitude of first-turn pileups, or will it simply turn out to be a non-factor? 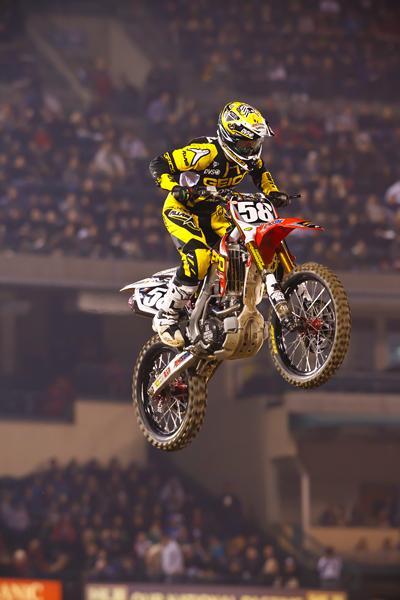 Wil Hahn is returning from injury and will be throwing his leg over Trey Canard’s ride as Cole Seely departs the Supercross class for the remainder of the series. Hahn didn’t have much time to shine after busting his hip with only one round of the Lites West Region under his belt, but many of the Red Riders from the Lites class have faired well as a fill-in rider for a vacant spot in the big bike class. Can Wil ditch the walker and keep the trend going?

Just a couple races into the Eastern Regional Lites Supercross series, it became obvious that Justin Barcia was the man to beat, prompting fans and media types to begin speculating on who the first person to challenge Barcia might be. Ken Roczen and Blake Baggett were two names that often topped the list, but in Indianapolis, it was Rockstar Suzuki’s Blake Wharton who stepped up and put an end to Barcia’s winning ways. Is Slash’s first victory since 2009 the confidence booster he needs to put together a winning streak of his own, or will Barcia’s first loss of 2012 serve as motivation to come back hotter than ever this weekend in Toronto. 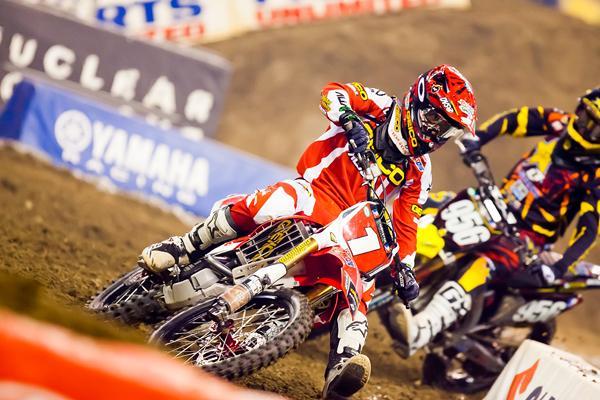 The only two winners of the Lites East Region thus far--Barcia and Wharton.
Andrew Fredrickson photo

By now, you’ve probably seen the footage from the first Lites heat race in Indianapolis in which Darryn Durham celebrated his narrow win over Ken Roczen by busting out a classic nac-nac over the finish line jump. Roczen showed his appreciation for the move by charging into the ensuing corner and peppering Durham with roost. You’ve got to love Durham’s bravado and Roczen’s fire in this situation, and it makes you wonder what might go down if the two get together again this Saturday night.

Rising to the Occasion

Davi Millsaps has scored podium finishes in the last two rounds with the absence of Reed and Dungey. Justin Brayton captured a career best second place last weekend after Stewart crashed out. Will these two be able to lay claim to the podium for the remaining rounds with the absence of the series’ heavy hitters? They have what seems to be a new level of speed, but there are still a select few who have yet to rightfully earn some podium hardware. 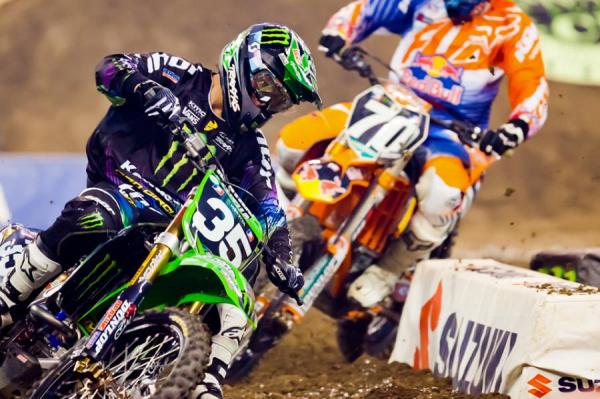 Look for things to get interesting if these two get close again.
Andrew Fredrickson photo

Cole Thompson has been able to log a couple of top-ten finishes this season in the Lites class after making an early jump up to the pro ranks. He has certainly shined in select rounds, but he has also had to deal with his fair share of DNFs, like last weekend in Indianapolis. A native to our northern neighbors, Thompson will look for redemption this weekend in the Motherland.

Jake Canada has been consistently moving up in the ranks in the Lites East Region. He started his season off by consistently securing tenth place finishes—an impressive feat for a rider who was relatively unknown before the season opener in Dallas. He improved his resume in Indy by bringing home a career best top-five finish in the main. We’ve seen that he’s consistently been a top-ten guy, but will we be able to consider him top-five material by the end of the series? 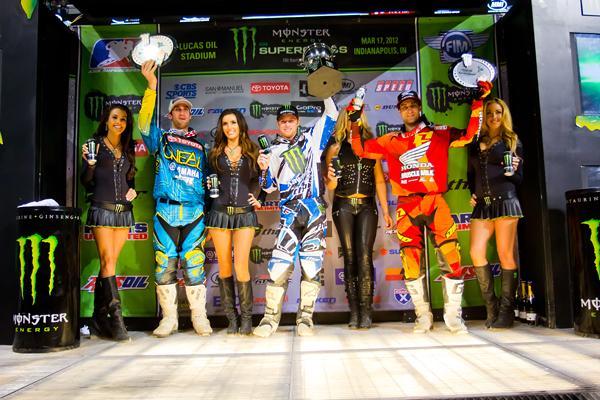 Will this be these be the new familiar faces on top of the podium?
Andrew Fredrickson photo

You haven’t seen much of Angelo Pellegrini on television, but he’s quietly been doing well. The Italian has qualified for three of five Lites main events so far, and recorded a season high of eleventh place in Indianapolis. It isn’t likely that we’ll see him battling for podium positions any time soon, but it’s going to be interesting to see what way he goes now that he’s got three Lites main events under his belt here in America. Was his eleventh in Indy as good as it’s going to get, or will he keep building and put it in the top ten in Toronto?